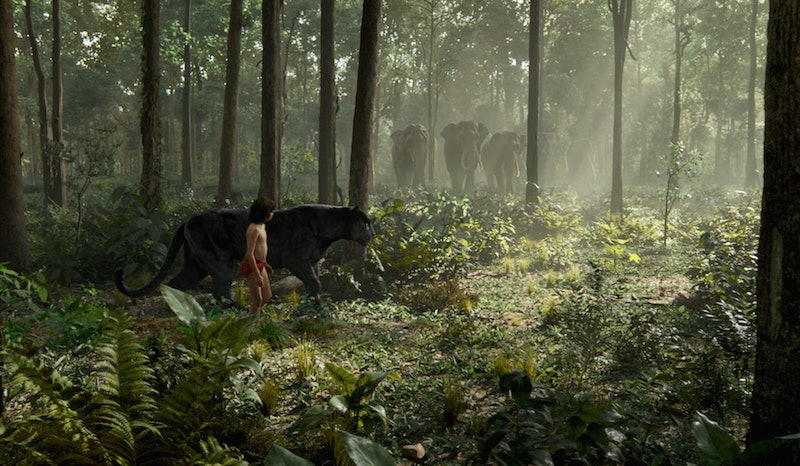 Disney has had a monopoly on Rudyard Kipling's The Jungle Book since it premiered the classic 1967 animated adaptation of Kipling's 19th-century stories of a young boy raised by wild animals in the depths of the jungles of India, where Kipling spent the first few years of his life, according to the Kipling Society. Since the studio's auspicious start with the perennial favorite, it's released an animated follow-up, three live-action adaptations, and two .short-lived spin-off television series. Two more additions to the franchise are impending: One by Disney itself, and the other, a Warner Bros. competitor directed by Andy Serkis. So how will the Disney Jungle Book fit into the canon of films released over the past 50 years? Is The Jungle Book a reboot, a sequel, or something else entirely?

The Jungle Book trailer released late last summer reveals a masterpiece of computer-generated imagery — an impressively sinewy snake, Kaa, and a lush forest of greenery developed out of pixels and technology. Visually, it's a far cry from either the animated or live-action forebears, but employing a combination of human actors and CGI animals, it might occupy a middle ground between Disney's previous work on Kipling's stories. And based on what's been revealed of the story so far, it seems to work with the original stories that influenced the 1967 Jungle Book, though reimagining them for a contemporary audience.

Director John Favreau, the man behind both Iron Man and Chef, grew up with the original Jungle Book , he told Yahoo. "These are some of the earliest memories that I have," he said. "It was vitally important to me to honor the images that stand out the most, but not do a carbon-copy of the original."

So what does that mean? What will be the same? Among the images Favreau selected to re-envision in his upcoming film were the iconic shot of Mowgli (Neel Sethi) gliding down a river on the belly of the big bear Baloo (voiced by Bill Murray), as well as references to the giant snake Kaa's famous hiss of "trussssst me" and Baloo's "Bear Necessities" routine. Some of the music will crop up, though Favreau has kept a tight lid on exactly how he'll incorporate the often-humorous musical moments of the original movie into a film that is, ostensibly, much more of a drama. Many of the same characters will appear, from Baloo and Kaa to the menacing tiger Shere Khan (voiced by Idris Elba) and King Louie (voiced by Christopher Walken). Like the animated original, the new Jungle Book will be primarily an on-screen invention; Sethi is the only live actor who appears in human form.

However, Favreau told the Los Angeles Times that he was resistant to working in CGI because of the "uncanny valley" effect — in which a computer-generated character looks just enough like a human to generate a response of revulsion in its audiences, because it's not quite real enough to pass for live-action. So while the voices of each animal might be easy to place, the creatures look far more like wildlife than anthropomorphic beings.

Still, Favreau told Yahoo that he was resistant to doing a faithful remake of the 1967 movie. Instead, he used the resources at his disposal — from a star-studded cast to the technological advancements of the last half-century — to craft an entirely new world that will appeal to young and old alike. Perhaps most importantly, serpentine Kaa, originally played by voice actor Sterling Holloway, has been gender-swapped: She will be voiced by Scarlett Johansson, whose soothing alto gives texture to the trailer. "The original movie was a little male-heavy," Favreau told Yahoo in the same story. "We thought Scarlett ... would be perfect. Her voice is so emotive." The best evidence of Johansson's vocal talents, to say nothing of her on-screen acting ability, might be Her, the 2013 Spike Jonze film about a man who falls in love with his artificially intelligent operating system.

Kipling's stories were darker, more moralistic, and less childish than Disney's animated adaptation. Much of Disney's The Jungle Book's lasting value comes from its nostalgia factor — it's impossible to think of that movie without, like Baloo in the 2016 film, beginning to whistle "Bear Necessities." Favreau told Yahoo that he hoped to incorporate more adult, action-adventure themes into his movie. "The original film felt so young," he said, adding that the tone of a musical would jar against his "photo-real" movie.

To that end, Baloo has been returned to his original sloth-bear form, a deviation from the endearing, humorous brown bear of the original animated film. Favreau said he studied the physics of polar bears to get the river-floating scene right. Because orangutans don't exist in the part of the world where The Jungle Book is purportedly located, King Louie is now an extinct species of ape known as Gigantopithecus. With hands that look about as big as Mowgli himself, he cuts a far more menacing figure than the original kooky character.

Between its absurdly good cast (Lupita Nyong'o and Ben Kingsley round out the big names) and its careful craft, The Jungle Book of 2016 is much more than just a remake of the 1967 film, though it has elements drawn from its various predecessors. From early looks, Warner Bros.' 2017 film will need to put up quite a fight to top Disney's latest installment.

More like this
At 28, Lesley Manville Was Acting, Picketing, & Singing Kate Bush Songs
By Olivia-Anne Cleary
Reese Witherspoon Gave Fans Hope For 'Legally Blonde 3' After This Surprising Movie Inspired Her
By Jake Viswanath
22 Movies On Netflix That Are Perfect For The Whole Family
By Bustle Editors
Everything To Know About The HBO Max & Discovery+ Streaming Service Merger
By Brad Witter
Get Even More From Bustle — Sign Up For The Newsletter