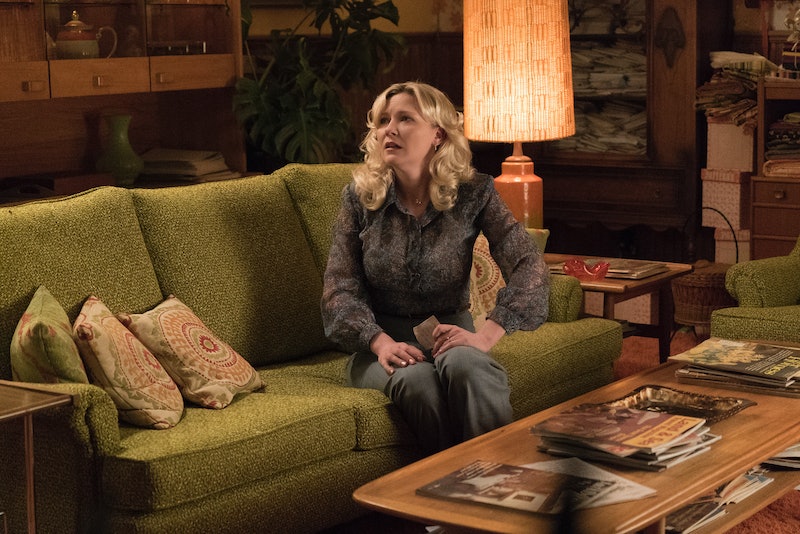 Fargo's second season left an impression on the television landscape, providing one of the best seasons of TV to grace our screens in 2015. Now, with Fargo Season 2 coming to Blu-ray and DVD on Tuesday, Feb. 23, there's going to be even more insight into the year's most compelling fictional true-crime story. The home media release promises special features that will shed even more light on some of the elements that made the show so complex. Bustle received an exclusive look at one of the Fargo Season 2 bonus features, which is dedicated to one of the series' most compelling figures — Luverne's own Peggy Blumquist as played by Kirsten Dunst.

Peggy is the last character you would expect to get involved in a massive crime war, let alone start one. However, Peggy not only brings about the crime war when she accidentally runs over a member of the powerful Gerhardt family, but she ends up surviving the famous Sioux Falls Massacre that brought about the fall of the Gerhardt crime family and took out more than a few of South Dakota's finest. As one of the most complicated characters to be introduced to television in 2015, Dunst had a lot to work with when it came to inhabiting the role of Peggy, and hearing Dunst speak about the role in the Waffles and Bullet Holes: A Return to Sioux Falls feature gives a fresh perspective on the character.

As co-star Ted Danson says in the clip, "There's something a little dangerous about Kirsten Dunst," which is evident in some of her more dramatic roles. Peggy has the exterior of a rom-com protagonist that Dunst has played many times, and the interior of Dunst's more anarchic characters like Regan from the film Bachelorette or her Cannes Film Festival Award-winning role as Justine in Melancholia. Despite Peggy being able to tie up and stab a criminal hostage, Dunst still found ways to empathize with the character. "I always felt like whatever Peggy did was right," Dunst says in the clip, also stating that she didn't judge her character. "[Peggy is] doing what she needs to do to protect herself."

Dunst's acting process, as she describes it in the video, involved focusing solely on her character as opposed to the series as a whole. "It was episode-to-episode, how I worked on this." Dunst says in the featurette, "I wouldn't read full episodes all the time ... I think I just tried to stay in my own bubble with it all." This approach helped Dunst focus on Peggy's transformation from bored housewife to half of an accidental Bonnie and Clyde-style crime duo.

Dunst's performance as Peggy has garnered her critical acclaim, including a Critics' Choice Television Award for Best Actress in a Movie/Miniseries, which is no surprise considering the skill with which Dunst portrayed such a complicated character. Peggy is truly unlike many other personalities on television — A female antihero that isn't necessarily "strong" or "powerful" in the typical ways one would expect an antihero to be strong and powerful. Peggy is just a seemingly average midwestern hairdresser who happens to realize that she'd much rather be good at maintaining a life of crime than maintaining a home.