Alec Baldwin is hosting a Super Bowl party, and we’re all invited — sort of. Amazon has released three Super Bowl commercial teasers for their big game commercial with Alec Baldwin and Dan Marino, wherein Baldwin is planning an epic Super Bowl party, aptly named the #BaldwinBowl. And, he is doing it with the help of the advertised product: Amazon Echo, because these fun little comedic vignettes don't come without a price tag (our attention on a new product). This commercial's price tag is getting us to wonder what the Amazon Echo (a.k.a Alexa) is and why it's so integral to Baldwin's big party.

In the teasers, Baldwin asks Alexa, a.k.a. the Amazon Echo, questions and has her place an order for cheese. Unfortunately, at this point in time, this commercial is getting me to consider buying myself a snack stadium, but it's not quite explained what this contraption-slash-cheese-assistance really is. According Wired, Alexa and the Echo play music on command, create shopping lists, connect directly to Amazon Prime, link to Google calendar, explain the weather and traffic. Basically, it's "a smart home hub," which means it does a ton of things, including helping you find your phone or turn on your TV with voice commands instead of touch. I suppose having this electronic assistant really could help throw a party.

But, before Baldwin’s big party, let’s take a look back at the actor’s other entertaining appearances. While he may be relying on the product he's selling to host this party, he'd probably be a great host with or without it. After all, the man has been making us laugh as an awards show host, TV personality, and (most importantly) Jack Donaghy from 30 Rock for years now.

It was hard to tell where Alec Baldwin began and Jack Donaghy ended in his popular Capital One spots.

Yes, that is Alec Baldwin’s voice.

In addition to The Royal Tenenbaums, Baldwin has also narrated video games, documentaries, and children’s program Thomas and Friends.

His SNL Hosting Gigs Are Incredible 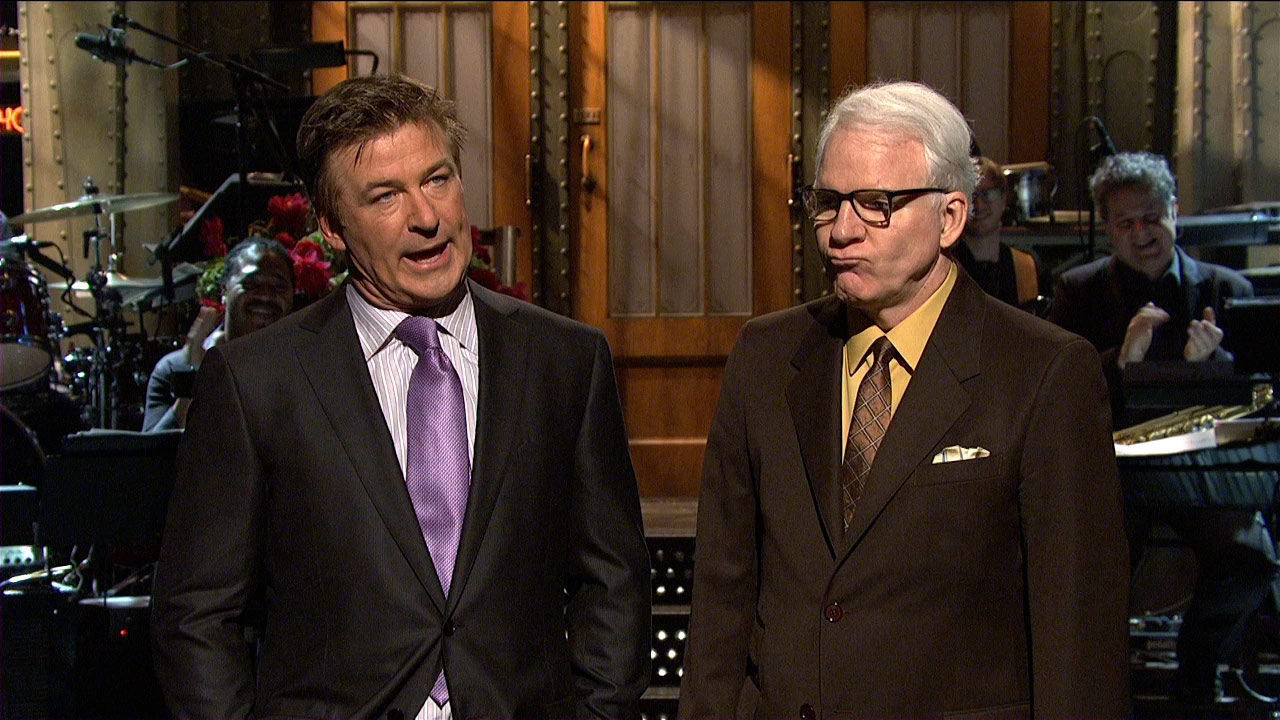 Baldwin has hosted Saturday Night Live 16 times — more than any other host, ever, much to Steve Martin's feigned chagrin (Martin is close behind, having hosted 15 times).

In 2005, Baldwin appeared in a concert version of South Pacific at Carnegie Hall as Luther Billis, which was broadcast on PBS.

He's Great At Hosting Things... Like The Biggest Hollywood Party Ever

Baldwin hosted the Oscars in 2010 with Martin. He has hosted other events like the NFL Honors, so yeah, he's got this party thing in the bag.