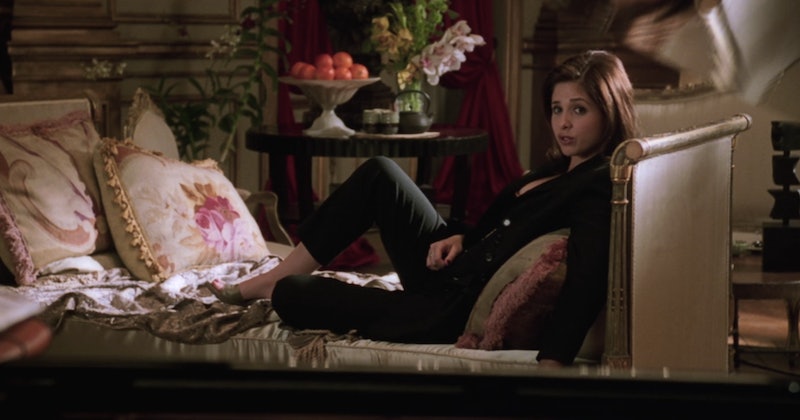 When I recently heard that Cruel Intentions may get a sequel TV show I had to roll my eyes. First of all, Cruel Intentions as a TV show is basically just Gossip Girl. But second of all, the film is so of-its-time and ridden with mind-boggling with it’s plot holes that I wouldn’t want to tamper with that gloriousness... ever. Good or bad (or both) Cruel Intentions is a crazy film that should really make us all think. In the immortal words of my brother, the movie has us asking, “So wait, what are their intentions, though? And don’t say they’re cruel.”

To recap on this modern Les Liaisons Dangereuses, the movie is about a bet between step siblings Sebastian Valmont and Kathryn Merteuil. If Sebastian Valmont can bed the virtuous Annette Hargrove, Kathryn will f*ck his brains out. Cute. Somewhere Sebastian develops feelings for Annette, and Selma Blair has a substantial role as the bet’s monkey-in-the-middle Cecile. In short, though, Kathryn is a gem, Sebastian punks the entire Upper East Side, and this movie is late ‘90s gold.

So settle in as I chronologically document every strange thing from your favorite guilty pleasure, Cruel Intentions. And yes, make sure to queue The Verve up on iTunes.

Blink and you'll miss it!

3. Let's Take A Moment To Absorb How Vile This Is

And another moment to consider that Sebastian is the protagonist of this film.

Kathryn in a tailored power suit.

Cecile's mother in kelly green, and Cecile, open-legged, in the koala t-shirt.

"Yeah, I took a wrong turn after the 'Which Backstreet Boy Is Right For You' quiz."

9. I Wish My Adolescent Music Lessons Were So Interesting

I'd have probably learned the violin by now if such were the case.

And keep my eyebrows dark, because it's what Madonna would've wanted.

11. I Like How Kathryn's Whole Aesthetic Is "Mistress At A Funeral"

And hair-brushing in the park is a casual friend activity.

12. "You Know l'm Seeing Someone." "The Infamous Trevor. lt's Funny How You Haven't Mentioned Him Until Now."

AND THAT'S THE LAST TIME HE'S MENTIONED IN THIS ENTIRE MOVIE.

13. Does Everyone In Kansas Just Know Each Other?

Like, the Gregster is the only other person at Manchester Prep from Kansas City and apparently him and Annette are lifelong friends.

14. How To Seduce Menfolk

16. "l Called You Because l Missed Talking To You."

Mind you, he's had like, ballpark, two aborted conversations with Annette on screen.

17. I Like How Everything About Sebastian And Kathryn's Demeanor Suggests "Sociopath" Here

Like, how is Ronald now skeptical of those grinning maniacs?

CAN I GET AN AMEN.

19. Cecile Is High School Aged But Has A Satan-Possessed Doll On Hand

Seriously, did she adopt that thing from the Twilight Zone?

22. The Fact That Sebastian Has A Tray Of Maraschino Cherries Next To His Bed

23. These Two Asshats Making Out On The Top Of A Penn Station Escalator

YOU ARE EVERYONE I HATE.

Like is this Sebastian's room, I can't tell because all I can see is blurry, sweaty bodies.

26. "Do You Honestly Believe You've Done A Complete 180 In The Few Days You've Known Her? Well, Let Me Tell You Something. People Don't Change Overnight."

OK, but she's basically saying what I'm thinking, because it makes zero sense that we feel bad for Sebastian just because he's gorgeous and develops human feelings in the last 10 minutes of this film.

27. Does Kathryn Have A Framed Picture Of Herself?

28. So The Premise Of This Film Is That Sebastian Is Just A Troll To Everyone, Even In Death

Again, and I feel bad for him because...?

29. And While It Is, At The End Of The Day, Brave That These Two Joined Forces And Mass Publish This Tale, And We Can Definitely See Them As Victims To Manipulation, Can We Just Accept That There's No Way Their Reputation Would End Up Unblemished In The End?

Not that I'm Team Kathryn or anything (I mean, I am, but...), it's just like... Annette still is a Kansas City goody-goody who caved on her principles for some guy she knew for two weeks, and Cecile is still the biggest idiot on the planet.

30. Also, Does It Honor Sebastian's Memory To Reveal He Didn't Know How to Spell "Friendship"?

31. And You Know, This Is Cool Or Whatever, But It's Basically Grand Theft Auto

And "Bittersweet Symphony" swells in the background.

More like this
Then Vs. Now Photos Of The 'Enchanted' Cast In 2007 & The Sequel's Stars In 2022
By Marina Watts
See 'Twilight' Stars Together Again For A Sweet Cullen "Family Reunion"
By Stephanie Topacio Long
'The Princess Diaries 3' May Go Ahead Without Anne Hathaway
By Darshita Goyal
Lily Collins Has Pretty Strong Opinions About Being A ‘Nepo Baby’
By Darshita Goyal
Get Even More From Bustle — Sign Up For The Newsletter