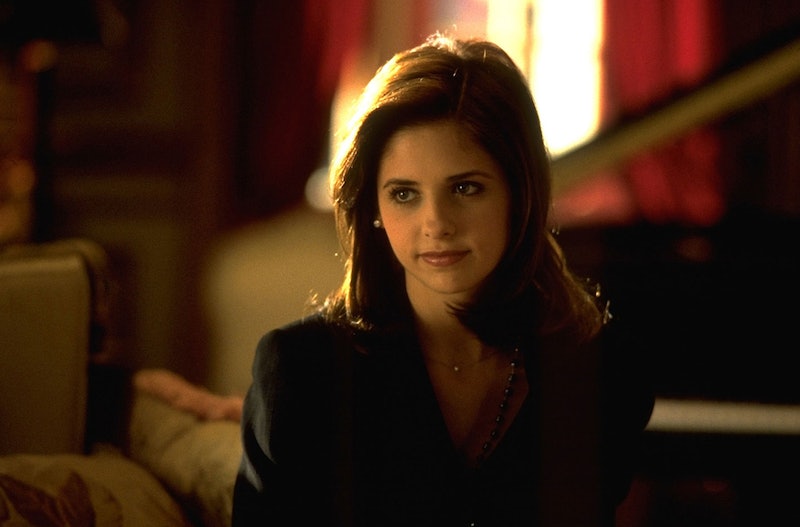 Make no mistake: Kathryn Merteuil is a monster. Kathryn in Cruel Intentions — the steamy 1999 take on Les Liaisons Dangereuses — is a blend of beauty, brains, and sociopathic behavior, hardly the plucky go-getter we love to root for in teen movies. But, with the ladies of Cruel Intentions reuniting for the newly adapted musical earlier this week, I'm getting reflective on why exactly we still love the wicked witch of the Upper East Side... and, interestingly enough, I have more than a few reasons.

For me personally, I think I've always identified more as a Kathryn than an Annette. Not in a grandiose way, but let's just say that my youth was peppered with more premeditated cruelty than I'd like to admit, and, truthfully, I was never good at being an innocent virginal blonde — even when I was one. Of course, there are plenty of things she does that I don't agree with, like her cocaine addiction, inciting girl-on-girl war, and sleeping with other people's boyfriends... Yeah, I hear that's also frowned upon.

But, for the rest of us, Kathryn's good qualities ("good") are chalked up to plenty of blink-or-you'll-miss-it examples. So join me as we recount why we adore my love, Kathryn Merteuil.

1. Because she was a talented actress.

Up until Sebastian's diary spilled the beans, Kathryn had every prominent authority figure fooled into thinking she was a virtuous young women who only had eyes for Jesus. That's a pretty masterful talent considering someone with that many coal black power-blazers should read as nothing but pure evil.

2. Because of the societal burdens that forced that mask of perfection.

It's stated pretty early on that Kathryn feels a need to put on that act to make it as a woman, instead of embracing her dark side fully. While this is a debatable excuse, given her obvious interest in manipulation, it does feed into the film's obsession with the Madonna-Whore complex. Kathryn's ultimately punished for using her sexuality as a weapon, but she is also put in a negative light for being sexual-while-female, while the equally promiscuous Sebastian gets a free pass from the film. And, knowing this, Kathryn has to take on the persona of an Annette Hargrove type. We'll tap-dance upon this issue later.

3. Because her scheming efforts make Blair Waldorf look like a rogue amateur.

She just infiltrates high society to mess up the lives of a few morons, half for revenge, and half for fun. And, for the most part, she's pretty effective.

4. Because she had impeccable and unforgettable style.

With all those harsh black angles, sheer and satin fabric, and the occasionally corseted waist, Kathryn has a look that's entirely her own. It's sleek, sensual, and you want to tear those clothes off her more than Sebastian does. Also, when you can make a buoyant side part and brown chola lipstick work for you, you've earned the title of a pop culture style icon.

5. Because she had sexual chemistry with everyone she came into contact with... but ESPECIALLY her smoking hot step-brother.

Kathryn could bed anyone she want (and pretty much does over the course of the film), but the chemistry she has with Sebastian is a high-powered lust that makes Fifty Shades of Grey look like Sesame Street. And, yeah, if I had a step-brother that looked like Gen X Adonis Ryan Phillippe, I'd devise many a clever game of seduction to, you know, seduce him.

6. Because she was genuinely mean, and not in a teen movie way.

"Cruel" is a more than accurate word to describe our girl. The likes of passive-aggressive Regina George and even Jawbreaker's Courtney Shayne (who straight-up KILLED SOMEONE) pale in comparison to the fatal combination of words and actions Kathryn implements to ruin lives. She's frighteningly heartless for 99.9 percent of the film.

7. But because she's also a kinda funny while being genuinely mean.

The bit where they read Annette's Seventeen Mag article always gets me, and I also really love whenever she calls out Cecile for being the dumbest person, because, let's face it, she is.

Nobody loves Reese Witherspoon more than me, but can we agree that this character is kind of hypocritical? She writes a virginity pledge in a national publication, but then loses it to an obviously scummy guy she's known for two weeks (WHILE SHE'S DATING TREVOR, NOBODY MENTIONS THAT).

9. Because she literally calls out the huge double standards between male and female sexuality.

"Eat me, Sebastian! It's okay for guys like you and Court to f*** everyone, but, when I do it, I get dumped for innocent little twits like Cecile." I love you. Own it.

10. Because nobody can doubt her commitment to a plan.

She's willing to go all the way.

11. Because let's face it, she radiates with glamour.

She's, what, 17 years old and constantly lounging about with a glass of champagne? I WISH I could emulate luxury like that.

12. Because of the even slightest possibility that she truly loved Sebastian.

Maybe she's crying at the end because she found out that the man she was possessive of thought her to be a wretched creature, in spite of their extremely charged sexual games. Maybe she's crying because she just got outed as a cokehead to the entire student body. I guess we'll never know. Cue "Bittersweet Symphony."