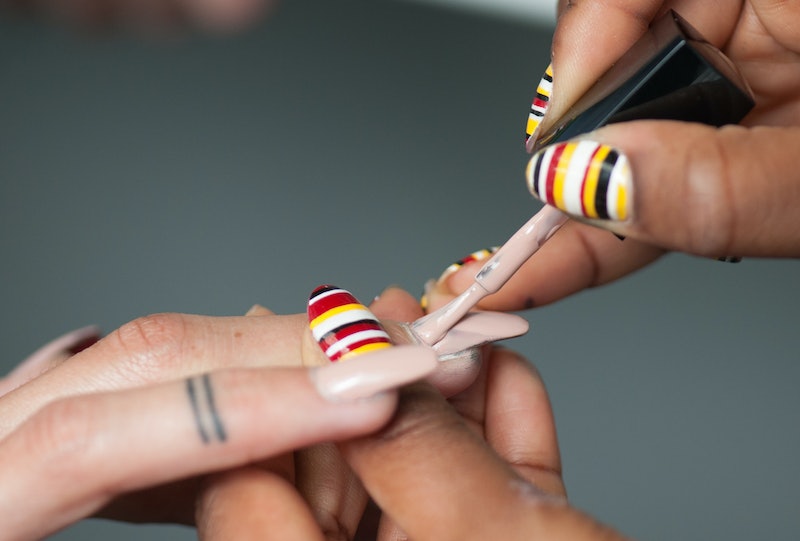 We all know that a good manicure can be a great way to treat yourself. But if you're a nail polish hoarder like myself that you might relate to the feeling of guilt that bubbles up at the salon when you know you could save money paint your own nails. But hey, even if we're going to resign ourselves to at home spa nights it doesn't mean we can't use a few manicure tips from some expert manicurists. We tend to find that at home manicures are never quite as shiny or long lasting as ones done by a pro, but there are certainly ways we can improve our chances.

After all, a broken nail or a hangnail can be a nuisance — especially if you know that the right manicure techniques can prevent them. There are a number of things you need for the right at home manicure from the right tools to a selection of your favorite polishes, but there are also a bunch of steps a pro would never take. What I learned from speaking with a few experts is that I need to make a few changes to my routine. We all want strong and healthy nails, but I'm willing to bet we're also guilty of some of these damaging mistakes.

1. Pick Or Peel Their Gel Mani

One tip that essie celebrity manicurist Julie Kandalec gave is to never pick or peel at a gel manicure. We all know that gel manicures can be damaging to your nails but there are ways to keep the negative effects to a minimum. Gel lasts so long because it binds itself to the top layer of your nail, so if you scrape or peel gel off without proper removal you're going to compromise the structural integrity of the nail. Instead, soak them in acetone-based polish remover until the polish dissolves.

Zoya manicurist Naomi González-Longstaff took us to school on why cutting your cuticles is actually doing more harm than good. She tells me over email that "the skin surrounding the lunar part of the nail is living tissue." That means that what grows back is scar tissue — tough skin that you might mistake for simple cuticle dryness. Push your cuticles back instead of snipping them, and use a cuticle oil to soothe any dry skin.

I learned from Celebrity Nail Tech Elle that I'm doing two major filing mistakes. The first is filing my nails using a back and forth motion. She says that this could weaken your nail to the point of splitting.

4. Buff The Top Of Their Nail

My second filing mistake? Buffing the top of my nails to create a smooth texture. "Buffing doesn't help polish hold," Elle tells me over email. "It's actually very damaging to the nail." Instead, she recommends using a product like Dermelect’s IMMACULATE Nail Cleanse Prep to properly remove oil and residue from the nail before applying the polish.

5. Use A Metal Cuticle Pusher

Elissa Schell, a NYC-based manicurist, tells me her number one tip is not using a metal cuticle pusher. Opting for a wooden stick is so much gentler and safer for your nail bed. She says ("scouts honor") that she's never made a client bleed during a manicure, which is more than I can say about myself and my at home manicures.

We have all been at a manicure and had our fingers soaked in a little bowl of water. This is a step of the process I've always felt was especially luxe but apparently I was mistaken. Manicure queen Deborah Lippmann tells me that water is pretty much the enemy of a manicure. "Water is very damaging and drying to the nails and also leads to polish chipping sooner," she says. "The nail plate is porous and therefore absorbs water while soaking, leading it to expand." Polish won't adhere as well to an expanded nail, plus your pretty mani is likely to chip when the nail dries and regains its normal shape.

Hopefully these manicurist "don'ts" can take your at home mani to the next level.