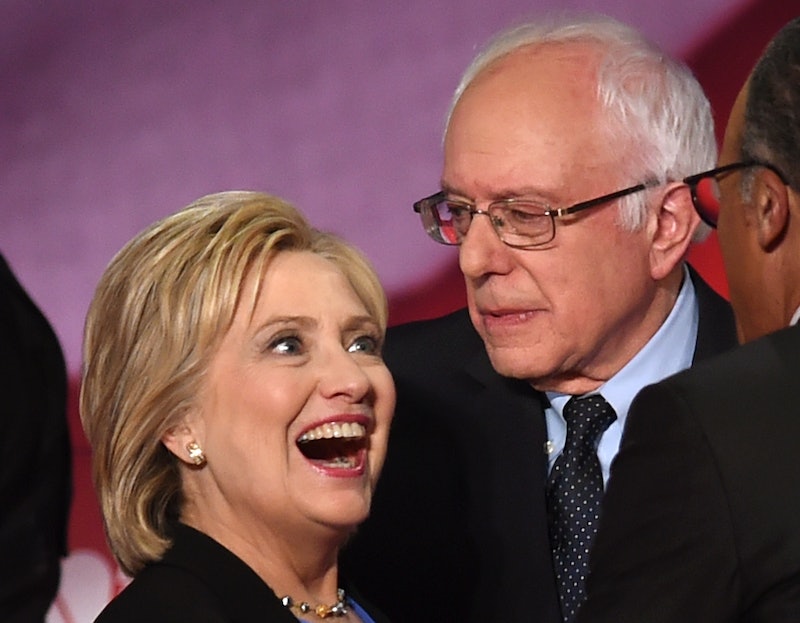 Fresh off the Iowa trail, both Hillary Clinton and Bernie Sanders are turning their focus to New Hampshire, where the next primary event and Democratic debate will be held. On Thursday, Sanders and Clinton will finally have the opportunity to face off one-on-one — since Gov. Martin O'Malley dropped out on Monday — and the stakes are only getting higher. A debate win for either candidate could translate to a surge in New Hampshire polls, and after such a close race in Iowa, both Sanders and Clinton are likely hoping for a clear win. This time around, MSNBC will host the Democratic debate, with Rachel Maddow and NBC News' Chuck Todd as moderators.

This debate is part of a new agreement made by the Sanders and Clinton campaigns to have more debates. Both Sanders and O'Malley criticized the Democratic National Committee's (DNC) initial sanction of six debates (some on days of the week that have low television viewership). The DNC chairwoman said that the debate schedule was a satisfactory way to allow candidates to hit the campaign trail and speak with voters one-on-one.

It turns out that, for as much as Sanders likes debates, Clinton continues to perform very well in them, and the DNC has now sanctioned four additional debates, the first of which will be Thursday.

Thursday's debate will come one day after a town hall forum hosted by CNN's Anderson Cooper. In the town hall forum, Sanders and Clinton willl answer questions from Cooper and New Hampshire residents in a more laidback environment, as opposed to the often-tense debates. Now that O'Malley is out of the race, both the town hall and the debate will be great opportunities for viewers to hone in on the two candidates' positions. Though O'Malley never really made a niche for himself in the race, there will definitely be more time now to focus on how Clinton and Sanders differ.

After such a close race in Iowa, Sanders and Clinton are both treading uncertain waters, which is why this debate will probably be the most tense — or at least interesting — of all. The debate, which will be held at the University of New Hampshire, will air on MSNBC at 9 p.m. ET. You can also stream it online at NBCNews.com and MSNBC.com.