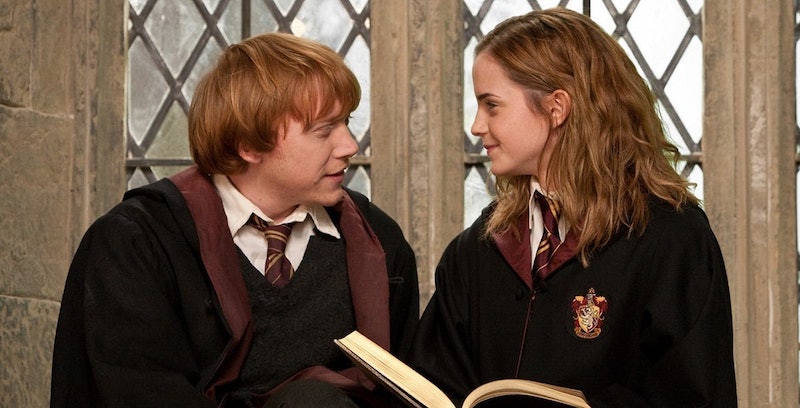 Ah, February, the month of chocolate, flowers, and love — and even though Valentine's Day just passed, there's still plenty of time to think about the loved ones in your life. Forget TV sitcoms and romantic comedies, though, because if you're looking for some serious insight, look no further than these relationship quotes from Harry Potter.

Whether it's with your parents, friends, romantic partner, or even a coworker, relationships are complicated. By nature, they're emotional and tangled, and often difficult to navigate, even in the best of times. A lasting positive relationship, personal or otherwise, takes hard work and communication, but with celebrity couples breaking up and famous BFFs starting new fights each week, it's easy to wonder: is it really worth the effort? If Selena Gomez and Demi Lovato can't mend their friendship and Gwen Stefani has officially moved on from Gavin Rossdale, can anyone make it work?

Of course someone, or rather someones, can: Harry, Ron, Hermione, and the rest of J. K. Rowlings beloved and faithful Harry Potter crew. No matter what they go through, they come out the other side closer than ever. So when you're doubting your own lasting love and friendships, or you just need advice on making it work, here are 15 relationship quotes from Harry Potter, because Valentine's Day shouldn't be the only time you show your love.

—Rubeus Hagrid, Harry Potter and the Goblet of Fire

The people that are worth having relationships with are the ones who can accept you for who you are, whether that be a half man, half giant, like Hagrid, a muggle like Hermione, or poor like the Weasleys. The ones who judge you aren't worth your time.

2. “We can’t choose our fate, but we can choose others. Be careful in knowing that.”

—Albus Dumbledore, Harry Potter and the Order of the Phoenix

While there are a lot of things we can't control in our lives, there is something we can: who we decide to spend it with.

3. “There are some things you can’t share without ending up liking each other, and knocking out a twelve-foot mountain troll is one of them.”

Relationships go through their fair share of ups and downs, but those hard times are what makes bonds of friendship and love even stronger in the end.

4. “Your mother died to save you. If there is one thing Voldemort cannot understand, it is love. Love as powerful as your mother's for you leaves it's own mark. To have been loved so deeply, even though the person who loved us is gone, will give us some protection forever.”

Relationships, the important ones, have a long lasting effect on us even after the other person is gone. One of the strongest examples? The relationship between parents and their children, of course.

5. “You're the one who is weak. You will never know love or friendship. And I feel sorry for you.”

We can only be so strong standing on our own. It's the people we love and have meaningful relationships with that make us stronger, better people. Just ask Voldemort, who didn't have a true friend in the world.

6.“Ginny, listen...I can't be involved with you anymore. We've got to stop seeing each other. We can't be together.""It's for some stupid noble reason isn't it?""It's been like...like something out of someone else's life these last few weeks with you. But I can't...we can't...I've got to do things alone now. Voldemort uses people his enemies are close to. He's already used you as bait once, and that was just because you were my best friend's sister. Think how much danger you'll be in if we keep this up. He'll know, he'll find out. He'll try and get me through you.""What if I don't care?"

Even when it's in our best interest, some relationships are worth the risk, especially when they involve true love.

7. “He accused me of being Dumbledore's man through and through.""How very rude of him.""I told him I was."

Dumbledore opened his mouth to speak and then closed it again. Fawkes the phoenix let out a low, soft, musical cry. To Harry's intense embarrassment, he suddenly realized that Dumbledore's bright blue eyes looked rather watery, and stared hastily at his own knee. When Dumbledore spoke, however, his voice was quite steady. "I am very touched, Harry.”

Standing up for the people you care about and proudly proclaiming your relationship is one of the sweetest ways to show you care. *Tear*

8. “Indifference and neglect often do much more damage than outright dislike.”

—Albus Dumbledore, Harry Potter and the Order of the Phoenix

Not all relationships are good ones. When you find yourself in a bad one, though, it is better to confront it head on than to ignore it to the point of no return.

9. “I cared more for your happiness than your knowing the truth, more for your peace of mind than my plan, more for your life than the lives that might be lost if the plan failed. In other words, I acted exactly as Voldemort expects we fools who love to act.”

―Albus Dumbledore, Harry Potter and the Order of the Phoenix

Some relationships are so strong with a bond so deep, they make us do crazy things against our better judgement. It's those relationships, though, that are worth it.

10. "And I've told you a million times," said Lupin, refusing to meet her eyes, staring at the floor, "that I am too old for you, too poor....too dangerous....""I've said all along you're taking a ridiculous line on this, Remus," said Mrs. Weasley over Fleur's shoulder as she patted her on the back. "I am not being ridiculous," said Lupin steadily. "Tonks deserves somebody young and whole." "But she wants you," said Mr. Weasley, with a small smile. "And after all, Remus, young and whole men do not necessarily remain so."

Everyone deserves love an companionship, beat up old werewolf or not. Never be afraid to pursue a relationship because you don't think you're worth it. You are.

Every relationship is different, am I right?

12. “And he knew that at that moment, they understood each other perfectly, and when he told her what he was going to do now, she would not say ‘be careful’ or ‘don’t do it’, but she would accept his decision because she would not have expected anything less of him.”

The best relationships are with those people who just get us. They love us and support us, no matter how crazy our plans get.Those are the relationships always worth fighting for.

13.“If you want to know what a man’s like, take a good look at how he treats his inferiors, not his equals.”

—Sirius Black, Harry Potter and the Goblet of Fire

You can tell a lot about a person by the way they conduct their relationships with others, especially those below them.

14. "Books! And cleverness! There are more important things — friendship and bravery and — oh Harry — be careful!”

Even as a young girl, Hermione is full of wisdom. She knows that what matters most isn't intelligence and achievements, but the people we love in our lives.

—Albus Dumbledore, Harry Potter and the Goblet of Fire

Whether it's in the context of a big group of friends like Dumbledore's Army or a friendship between two people, a relationship is stronger when you work together.