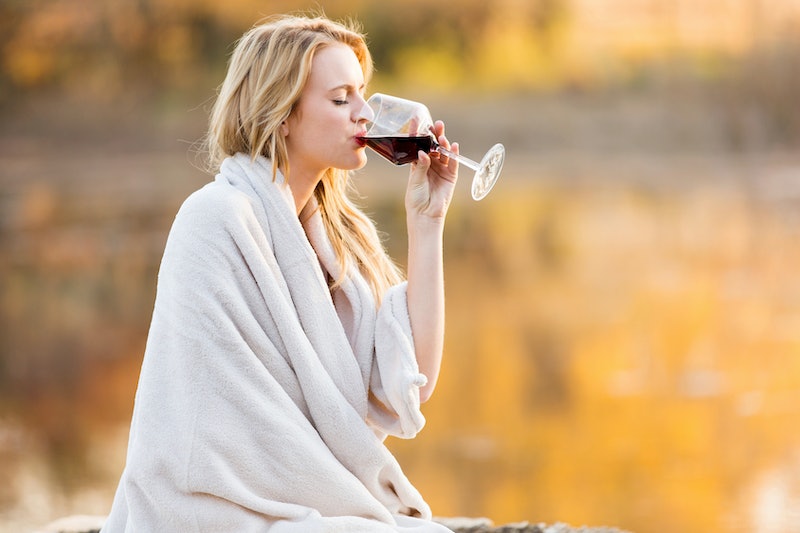 Science isn't always as unbiased as we'd like to think. In today's edition of "public institutions tell women what to do," the Centers for Disease Control and Prevention (CDC)'s new recommendations for preventing Fetal Alcohol Syndrome (FAS) instruct sexually active women to quit drinking entirely unless they're on birth control. Has a hottie across the room been making eyes at you all night? That's too bad — you had a beer earlier, so no sex for you. Did you and your boyfriend share a bottle of wine at dinner? Keep it in your pants, lady, because there's a chance you might get pregnant.

The new recommendations are intended to reduce the rate of FAS disorders, which can result when a woman drinks alcohol when she's pregnant. The CDC has long recommended against alcohol consumption for pregnant women, but their recent expansion of the guidelines stems in part from the number of women who may not realize they're pregnant at first. "About half of all pregnancies in the United States are unplanned, and even if planned, most women won’t know they are pregnant for the first month or so, when they might still be drinking," CDC Principal Deputy Director Anne Schuchat, M.D., said in a press release on the CDC's website.

Stating that there is "no known safe amount of alcohol" to drink during pregnancy, the CDC goes on to advise women who want to be pregnant to stop drinking entirely once they go off birth control, for obvious reasons. However, the report also heavily implies that any sexually active woman who doesn't use birth control should stop drinking as well, and their new fact sheet on the subject outright states that "to prevent FASDs, a woman should not drink alcohol... when she might get pregnant."

On one hand, it's easy to see where the CDC is coming from. FASDs are caused by alcohol consumption during pregnancy. Unprotected sex can cause pregnancy. Therefore, women who have unprotected sex probably shouldn't drink alcohol. The guidelines even side-step the issue of slut-shaming; rather than telling women to stop having sex, the CDC suggests that they stop drinking alcohol and keep doing their sexy thing.

However, the recommendations exemplify the double standard present in almost every discussion of birth control: While the CDC has plenty of instructions for women to prevent FASDs, the recommendations don't mention men at all. With the way discussions of unplanned pregnancy center around blaming women for their bodies' ability to bear children, you'd think that men had nothing to do with the process. At the risk of sounding like your eighth grade sex education teacher, it takes two to tango — and yet men seemingly bear no responsibility for preventing pregnancy or its consequences. Where are the guidelines instructing men to wear condoms if their partner doesn't use another method of birth control? What about suggesting men get a vasectomy instead of expecting women to go on the pill, which may be restricted in her area, or get an IUD, the insertion of which some gynecologists may even not perform on young women?

Furthermore, no form of birth control works all the time; even some IUDs, which are widely agreed to be the most effective option, have a failure rate of almost one in 100. Does the CDC expect all sexually active women to stop drinking, on the off chance they might get pregnant? Women already have enough people telling them what to do in their sex lives — it's enough to make a girl turn to drink.