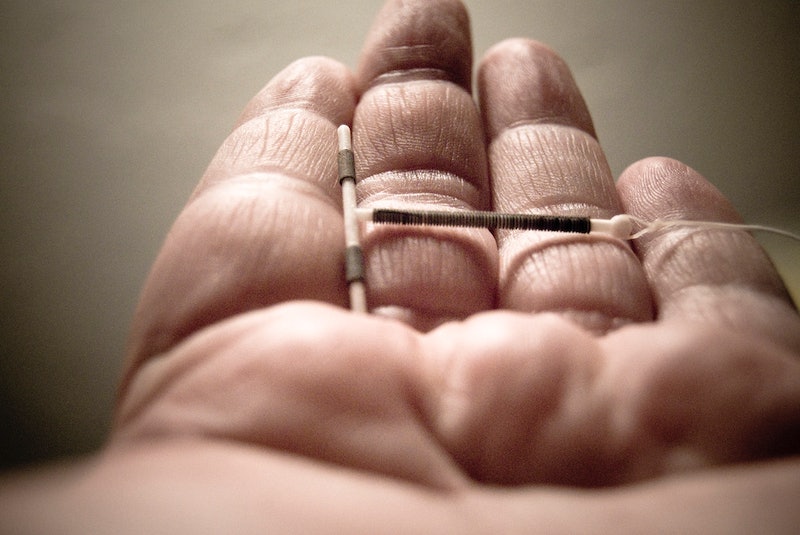 I've had vomit-inducing period cramps since I was 13, and let's just say I've had an unpredictable cycle or twelve in my time.

But when I went on Ortho-Tricyclen Lo earlier this year, I gained what felt like fifty pounds, and had constant headaches. The so-called designated breakthrough "bleeding week" was more like three weeks, and I'd have to take a breaks every couple of hours to avoid crying at the office.

For better or for worse, I started Googling, Reddit-ing, and hitting up every women's health commentator I could find for alternatives.

There, amid the dregs of faceless digital horror stories, feminist gynecologists, and Planned Parenthood, it emerged: I could get an intra-uterine device, otherwise known as an IUD.

I found myself sifting through conflicting information: Don't IUDs cause infertility? Would a Mirena make me into even more of a hormonal mess? When would I walk again after the most painful insertion process ever? Wait, what if I don't want cancer?

I needed context — and after reading what's out there about IUDs, I'm pretty sure the rest of digital womankind could use some too. Here's what you need to know about the oft-misunderstood IUD:

IUDs are the second most popular form of contraception on the planet, coming in just behind female sterilization. When it comes to preventing pregnancy, some would argue that they're even more effective than having your tubes tied.

The Guttmacher Institute for Reproductive Health explains how they work:

Somewhat unbelievably, no one is quite sure how they work, but the theory goes like this: The human uterus has one overriding purpose, which is to protect and sustain a fetus for nine months. If you stick a poker-chip-sized bit of plastic in there, the body reacts the way it does to any foreign object, releasing white blood cells to chase after the invader. Once those white blood cells are set free in the uterus, they start killing foreign cells with efficient zeal. And sperm, it turns out, are very, very foreign. White blood cells scavenge them mercilessly, preventing pregnancy. In copper-containing IUDs, metal ions dissolving from the device add another layer of spermicidal action.

2. They've been around awhile.

A long-standing (if unsubstantiated) myth has camel drivers implanting proto-IUDs (er, stones) into female camels so they wouldn't get knocked up on long treks across the desert.

Human women, for their part, have been using similar devices since at least the early 1800s in the form of cervix-covering "stem pessaries." In 1902, a doctor designed a pessary that extended the stem into the uterus itself.

For the next 50 years or so, European and American scientists kept inventing: the Sterilette, the Collar-Button, the Wishbone, the Silkworm Pust, and the Star. According to a 1935 guide to Practical Birth Control, "Sometimes these [cheaper IUDs] were claimed to be made of solid gold in order to enhance the price, and a few practitioners took economic advantage of the need and ignorance of women."

Every iteration of the IUD came with its own side effects, and many carried a high risk of infection. But as a concept, IUDs gained wider acceptance through the 1950s and 1960s, as more and more women started to use them worldwide.

3. IUDs have a traumatic history in the U.S.

And that brings us to the model that makes American gynecologists cringe: The Dalkon Shield.

By the 1970s, it looked like IUDs might win the day here, too. By 1973, nearly 10 percent of American women practicing contraception relied on the IUD, namely, this one:

Looks scary? It was. Let's just say some women (hi Mom) haven't forgotten the defective models that caused ectopic pregnancy, illness, and even death in over 200,000 women who used them. Though the IUD's manufacturer was forced to remove the device from the market and pay millions of dollars in malpractice settlements, The Guttmacher Institute points out that the trauma remains:

By mid-1974, after a spate of deaths from septic miscarriages, the manufacturer had suspended sales in the United States and soon thereafter, worldwide. For a decade, the media trumpeted a series of studies linking the Shield and other IUDs to pelvic inflammatory disease (PID) and subsequent infertility.

This was bad press, and as Wired magazine put it, IUDs have since sat at the "bottom of the contraceptive heap for years." (The Dalkon Shield controversy didn't make quite the same traumatic splash overseas, where women used different models.)

Today's American models don't come with the the same risks: They're all T-shaped, reducing risk of perforation, and contain only copper (known as "ParaGard") or low-doses of hormones (known as the "Mirena" or its new little sister, "Skyla").

All have failure rates of less than 1 in 100, and the hormone-emitting models keep the side effects localized. Spotting and cramps last for a few months, then, with some models, you actually may have NO MORE PERIODS. Most models last from 3 to 10 years.

5. So why are most of us on the pill instead?

Only 8 percent of women in the U.S. using contraceptives rely on an IUD. We're three times less likely to use one than a woman overseas.

Some doctors still won't prescribe IUDs for patients who have not yet had children, though the American College of Obstetricians and Gynecologists revised its 2007 guidelines to say that IUDs are indeed appropriate contraceptives for most women and adolescents — they are, in fact, recommended as a first line option, along with education on STIs.

Troublingly, many docs may still be reticent to prescribe IUDs, because as Slate reported in 2009, many are somehow still not trained in implantation.

The Dalkon Shield controversy still echoes, of course, but researchers do not think this is the only barrier to their widespread popularity. After all, four out of five U.S. women have tried a birth control pill, and those don't have a spotless past either.

6. Upfront costs may be holding IUDs back.

IUDs can cost up to $1,000 out of pocket — a bargain compared to the pill when you consider it can last 10 years — but a prohibitive cost up front. Some argue that the devices are overpriced. The Berlin-based designer and hacker Ronen Kadushin even made an open-source, contraceptive intrauterine device from a one-cent coin, to make the point:

In 2006, a team of Washington University in St. Louis scientists launched a study that provided ten thousand women with contraceptive education, then gave them totally free access to whatever method they chose. Half of the participants ended up choosing an IUD. Their study aligns with the results of another such experiment: When the Kaiser Foundation Health Plan in California adjusted its benefits to make both the IUD and injectable contraceptives free in 2002, IUD use rose by 137 percent.

Some advocates are hopeful that the oh-so-controversial Affordable Care Act coverage of birth control services will launch their popularity. New York Magazine ran an article last year on the trend of so-called "IUD Evangelism," in which one woman gets an IUD, tells her friends, and convinces them to get one too.

7. What other myths are out there?

What could abortion have to do with an almost impenetrable form of birth control? Well, nothing. Still, some fear that IUDs actually work as an abortifacient, by killing off sperm and egg combinations that cannot implant in the uterus.

In reality, the IUD interferes more with sperm migration and sperm function, which makes that sort of meeting unlikely. Plus, even if by some chance such an unlikely circumstance arises, the combination is not yet on track to become a fetus (in other words, there are a lot of steps left).

A 2012 study by the Centers for Disease Control and Prevention also showed that a third of practitioners had misconceptions about the safety of IUDs for women who had never given birth, cutting to the heart of the loudest buzzing conern: Fertility. In reality, with the current crop of models, there is almost no risk of infertility.

Cheesy as it may sound, everyone's body will react in its own way to any form of birth control.

If you're thinking of getting one, here's a pro tip: Schedule insertion for while you're on your period (your cervix is already open) and load up on the ibuprofen beforehand. This will help. For me, insertion hurt about as much as a bad period cramp, but ended quickly and even made me feel like a badass. I took the bus home.

Oh, and by the way, the nurse on duty said women with bad cramps tend to have an easier time giving birth, too. Not that I have to worry about childbirth at the moment.

More like this
Iran Has Issued A Death Sentence Over Mahsa Amini Protests
By Catharina Cheung, Darshita Goyal and Maxine Harrison
Wimbledon Alters All-White Kit Rule Amid Candid Period Discussions
By Catharina Cheung and Rachel Mantock
MOBO Awards Found Kanya King On The Woman Whose Grit & Determination Spur Her On
By Kanya King
Amanda Gorman Shared A Powerful Message On Meghan Markle’s Penultimate Podcast
By Darshita Goyal
Get Even More From Bustle — Sign Up For The Newsletter