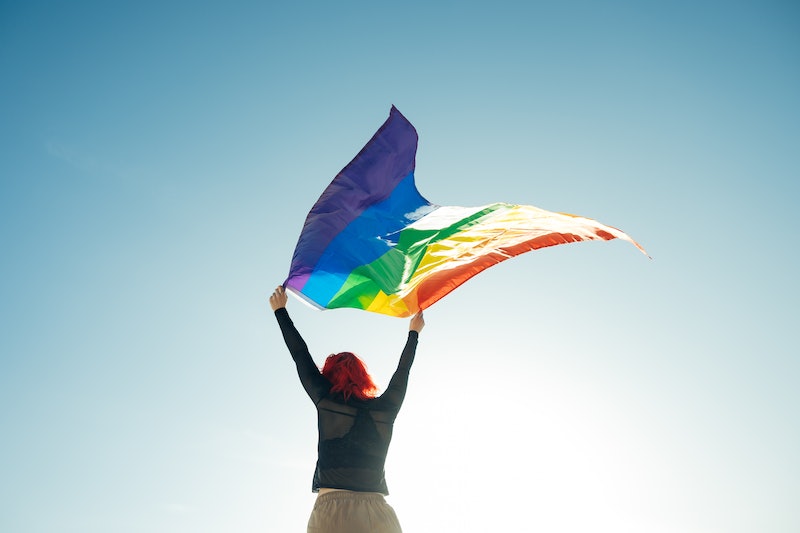 A lot of people joke that the acronym for the LGBT community has become "alphabet soup." Essentially, the idea is that as our understanding of sexual orientation and gender identity widens, we recognize more identities and extend the label to be more inclusive — which, to me, this is pretty reasonable. People are approaching inclusivity from a variety of different directions: For some, for example, it means expanding the acronym (hence the "alphabet soup" joke), while for others, it means using one word — "queer" — as an umbrella term. This word has a long history and a lot of associations with it, though, and not everyone feels the same way about it. The question of whether the word "queer" is offensive comes up fairly frequently — so is it? The honest answer is this: It depends on who you ask. I'm not here to tell you if you, personally, should use it or not — if you identify with it, great! If you don't, also great! — but I can tell you a little about the history of the word to offer a few different perspectives on it.

In terms of etymology, "queer" has a pretty interesting background. There are a lot of competing theories about what the word "queer originally meant, but in summation, it always meant "not straight." So as Cara over at Autostraddle points out,"“queer” set itself up as “not straight” centuries before “straight” had even been thought about as a sexual identity. For a while, "queer" had a lot of connotative uses as well, implying that people were drunk, giddy, or happy.

By the early 1900s, "queer" became used to reference homosexuals both by people within the community (Gertrude Stein in her poetry, for example) and people outside of the community (newspapers, for instance). Mostly, "queer" was used in a negative fashion in the way that words like "d*ke" or "f*gg*t" were, and this became even more popular in the 1950s and beyond. Therein, many people who are middle aged or older have some strong negative associations with the word, particularly because of bullying and harassment at school.

Now, many people are making an effort to reclaim the word queer, arguing that the word is more inclusive, and pointing out that by reclaiming a word, the community can have ownership and power over a word once used to hurt them. This movement to reclaim "queer" started in the 1980s and has become progressively more popular in the decades since, though it's still a divisive concept.

As I remarked before, whether or not someone identifies with and uses the word "queer" is an intensely personal decision. For myself personally, the word "queer" is one I use comfortably when it comes to academic discourse and discussing the "community." I avoid using it as a way of describing others, and generally avoid using it as a way to describe my own orientation, as I prefer a more specific label. Admittedly, as a woman of the Millennial generation who grew up in a relatively liberal area, I never experienced "queer" as a slur, so I have fewer negative feelings attached to it than many of my peers, especially those in the older generation. So just why is this topic so charged? Let's explore some possible reasons:

LGBTQA+ people are still the targets of hate crimes, bullying, and harassment on a regular basis. Yes, LGBTQA+ rights are moving in a positive direction, but there are still many inequalities in our country when it comes to the LGBTQA+ population. Beyond even legal inequalities, there is still a lot of hate, mistrust, and anger towards people who identify as queer. So while some people comfortably reclaim the word and see it as an insult of the past, others still confront it on a regular basis.

2. Sexuality And Gender Can Be Very Private

Sure, more people are openly identifying as queer than ever before. And that's great! But for many people, sexual orientation and gender identity can still be very private issues. While you should never out someone else, period, people may think using the word "queer" is OK because it has a broader definition than, for example, lesbian or bisexual. However, even using a broad label like "queer" counts as outing someone; the bottom line is that it's their private business, and no onelse's. If you are someone who is very open about your sexual orientation or gender identity, that's OK! But remember to speak only for yourself and your own experience, even if you have the best intentions.

3. Not All LGBTQA+ People Use It

People in the LGBTQA+ community who might technically fit the general definition of "queer" don't necessarily use it to describe themselves or others, we all need to respect that. Even if you know someone is gay, lesbian, pansexual, or so forth, you should avoid putting the queer label on them without their permission. And yes, that goes even if you're also part of the community. It's important to be cautious when putting a label on someone else; just because you're comfortable with it, or the word doesn't trigger bad associations for you, doesn't mean it's the same for everyone in the room with you.

The main defense in using the word "queer," I think, is that it is so inclusive. Sure, some people will write out the full acronym (LGBTTQQIAAP, which breaks down into: lesbian, gay, bisexual, transgender, transexual, queer, questioning, intersex, asexual, ally, and pansexual) but most people aren't familiar with it, or will accidentally leave out letters, which then defeats the purpose. A word like "queer" encompasses sexual orientation, gender identity, and gender expression concisely. It's also a word that most people are familiar with already. The LGBTQA+ community gets a lot of criticism for not being inclusive enough, so expanding the label is often regarded as a good way to get more people involved in the community and create a path for advocacy and awareness.

So, should you use the word "queer?" Or is it offensive? Ultimately, it's a judgment call and a personal decision. Either way, it's worth reminding yourself of both sides of the issue and deciding from there if you think it's appropriate or not. There is one use of the word that's universally acknowledged as not OK, and that's the use of it as a slur. Beyond that, though, I think intent is key — I would take into consideration the setting, the people around you, and what you're hoping to communicate. And remember: Even if you don't mean to offend, someone might take offense anyway, so be ready to own up and apologize if need be.