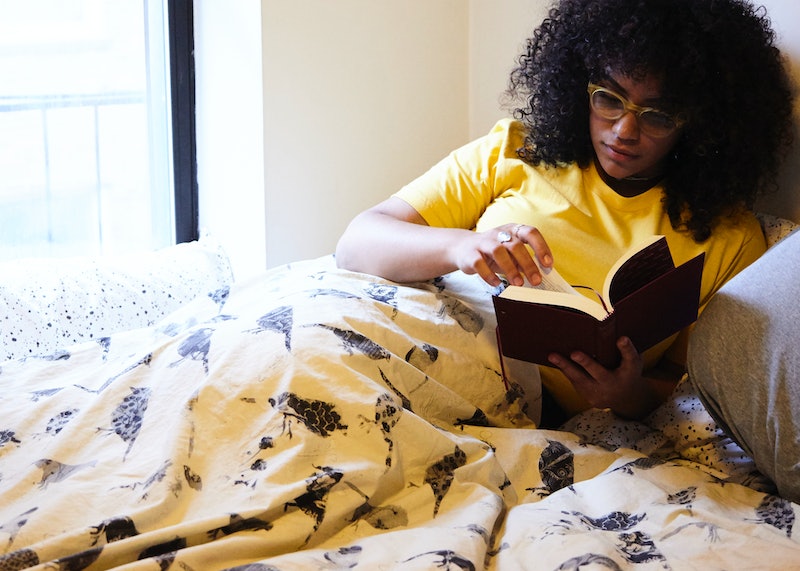 Science fiction may be great at creating far-out worlds, alternate realities, and unimaginable futures, but for a genre that's celebrated for its creativity and inventive style, it sure does like one particular kind of protagonist: caucasian, heterosexual men. Despite the over-saturation of that story — the story of the white dude who saves the day and gets the girl — in the genre, there are some outstanding feminist science fiction books that give a much needed voice to the diverse women of the world.

One of the best things about science fiction is its unlimited possibilities, and for feminist sci-fi writers, those unrestricted possibilities apply to not only the world the story is told in — on a distant planet, 13 billion years in the future in a time where humans have evolved to possess great powers — but they extend to the roles women play in that fictional world, too. Science fiction allows its authors to throw out the cultural norms and expectations of the present and instead imagine a future that isn't bound by binary gender roles and dominated by men.

From Ursula K. Le Guin to Joanna Russ to Octavia Butler, feminist sci-fi writers have been using science fiction to tell powerful stories about space heroines, female commanders and rulers, and general bad ass futuristic females that explore important themes of gender, sexuality, and race. They're stories from the female perspective, about the female perspective, and, as often is the case in real life, they're stories that end with the girl saving herself.

Despite what you might think, there's more to science fiction than Frank Herbert, Isaac Asimov, Philip K. Dick, and the straight white guys they wrote about — a lot more. Because women not only kick ass in real life, but in the fictional future too, here are eight feminist science fiction books to add to your reading list.

1. The Female Man by Joanna Russ

Written at the height of sci-fi's New Wave movement where women were making their voices heard in the genre, Joanna Russ's 1975 The Female Man is a cornerstone in the library of feminist science fiction. It's the 1970s, and in one reality, Jeannine is a librarian who is waiting to be married in a world that never saw the end of the depression. But in an alternate reality, she is also Joanna, a radical feminist, Janet, an inhabitant of Whileaway, a utopia where men don't exist, and Jael, an animalistic warrior at war with the males of her planet. The four meet, and each of their realities are turned on their heads. An inventive, thought-provoking novel featuring four incredible female characters, The Female Man is a must-read feminist sci-fi classic.

An essential read for every science fiction fan, Nalo Hopkinson's Midnight Robber is also a fitting addition to this feminist sci-fi reading list. A dark and powerful coming-of-age story that deals with issues of sexual abusive, incest, and abortion, Hopkinson's novel is a deeply personal and expertly executed. A complex story that intricately weaves a futuristic world, centuries-old mythology, and modern day women's issues, Midnight Robber is like nothing you've ever read.

Often compared to Frank Herbert's Dune, Joan D. Vinge's The Snow Queen is a feminist masterpiece all on its own. A retelling of Hans Christian Andersen's classic fairy tale with a sci-fi twist, Vinge's version of the Snow Queen myth includes an alien planet ruled by matriarchal monarchs, black holes, clones, and the classic clash of technology versus tradition. Featuring a variety of complex, layered female characters, The Snow Queen proves, as Vinge hoped, that women are indeed people, and their stories matter.

4. Woman on the Edge of Time by Marge Piercy

A dark and gritty book that addresses the topics of mental health, drug abuse, sexual abuse, racism, classism, sexism, and abortion head-on, Woman on the Edge of Time is a standout feminist science fiction novel. While talking with a Luciente, a woman from a idyllic future — one where everything from racism to homophobia to consumerism has been wiped out — Connie, a Hispanic woman committed to a mental institution against her will, learns that her actions will determine the future of the world. One wrong move can turn the utopia Luciente told Connie about to a alternate future where the worth of a woman is determined by her looks and sex appeal, a small group wealthy elite controls the masses, and plastic surgery is a way of life. If that sounds a little too familiar, it's time you read Woman on the Edge of Time.

5. Memoirs of a Space Woman by Naomi Mitchison

There are plenty of stories about men exploring galaxies far and away, but Naomi Mitchison's novel finally gives you the female perspective on things. Memoirs of a Spacewoman takes place in a future where men and women are essentially equal, at least when it comes to leadership positions, and chronicles the journey of Mary, a communications expert traveling from world to world in pursuit of scientific knowledge. An unabashed work of social science fiction that celebrates female sexuality and exploration, Memoirs of a Spacewoman is a fun feminist read.

You can't talk about feminism and science fiction without mentioning Octavia Butler. While all of her books would fit on this list, Dawn , the first in Butler's Xenogenesis series, features one of her best female characters, Lilith Iyapo. A strong, level-headed heroine, Lilith is one of the few surviving humans saved by the Oankali aliens, and maybe humanity's last hope at making it through.

Another author whose work is essential feminist sci-fi reading, Ursula K. Le Guin is known for her ability to bend gender norms. While most people probably know her masterpiece The Left Hand of Darkness , her 1969 novel set in the Hainish universe inhabited by"ambisexual" beings, "The Matter of Seggri," a short novelette most recently published in Le Guin's The Birthday of the World collection, is another gender-bending exploration worth the short time it takes to read it. Set on the titular planet Seggri, the short story turns gender roles on their heads by creating a world where extremely segregated men and women don't have the roles typically expected of them. A thought-provoking read, "The Matter of Seggri" should be considered required reading.

If you read feminist literature, then you probably know Charlotte Perkins Gilman's "The Yellow Wallpaper" by heart, but you might not know the author's feminist science fiction work. Moving the Mountains is the first in Gilman's Herland series, a utopian trilogy about a society composed of entirely women, followed by the more famous Herland, and its sequel, With Her in Ourland . Do yourself a favor, and read all three, because once you start to sink your teeth in, you're going to want more.