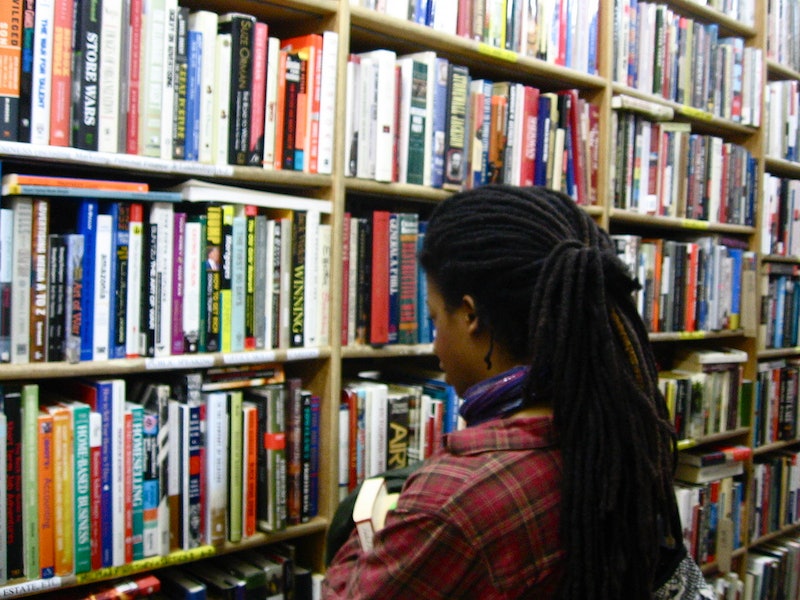 In romantic comedies, someone always says some cheesy line about wishing that they had found their significant other earlier in life so they could have had more time with them. As corny as it is, that's how I feel ... about Octavia Butler. She is my sci-fi soulmate.

I didn't start reading the work of the grand dame of science fiction until my early 20s. Once I discovered it, I was overcome with the sentiment that I should have been reading her my whole life. My love affair with Ms. Butler started with her short story and essay collection Bloodchild and Other Stories. The stories entertained me, scared me, challenged me, and made me think in whole new ways. But it was really the two essays that got me hooked. After I finished "Furor Scribendi" and "Positive Obsession," I went home and started submitting my own stories for publication. Butler's work is that inspiring and that powerful.

After Bloodchild, I was hooked. I read all five books in the Patternist series as quickly as I could buy them. I started and finished Kindred in one day. It felt like Christmas in the spring last year when it was announced that two previously unpublished stories were being released in an e-book collection, Unexpected Stories.

Throughout her career, Octavia Butler broke the boundaries of gender, race, class, and genre. She was a trailblazer for women and black writers. Her work has shaped the history and culture of science fiction. She was the recipient of the Nebula and Hugo awards and the MacArthur Fellowship (aka the "Genius Grant"), but her legacy is bigger than just awards. Her work has and will continue to influence generations of writers, from Junot Díaz to Karen Joy Fowler.

Reading Octavia Butler will change how you think, how you feel, and how you read, and it will be for the better. When you put down Kindred, you can look forward to these ten things happening to you.

When you're browsing the sci-fi section in your bookstore, you might think of H. P. Lovecraft and Isaac Asimov. You probably look for stories about robots and alien races. But the kind of science fiction that Octavia Butler created challenges the conventions of the genre along with the conventions the world she lived in. It addresses race, class, history, and gender, and it becomes a vehicle for the exploration of humanity. You won't think of the genre the same way ever again.

There are no job openings in your field. You can't afford to move to a new city. You're too busy and too tired. The list of reasons you can't live your dream goes on and on. Let Octavia Butler be your example ― nay, your inspiration ― when it comes to taking control of your life and going after what you want. Before she became a famous writer, Butler worked a number of odd jobs in places from factories to offices to pay for schooling, and even pawned her belongings when that was what was needed. She would get up as early as 2 a.m. to write before her shift, because that was what she knew she had to do.

You'll Become A Feminist ... Or An Even Bigger Feminist

Butler's female characters are strong, independent, smart, and unapologetic. They adapt and survive, and they are examples (much like Butler herself) of women who fight for their right to a good, fair life. Reading about these characters, and learning more about Octavia Butler herself, will no doubt inspire you to embrace your feminism on a whole new level.

The Term "Identity" Will Carry An Entirely New Meaning For You

Butler described herself as "a pessimist, a feminist always, a Black, a quiet egoist, a former Baptist, and an oil-and-water combination of ambition, laziness, insecurity, certainty, and drive." She gives her characters complex and layered identities, much like the layered identity she herself embraced. After reading Butler, "identity" will mean more than just race, gender, and occupation.

Engaging with a Butler book is like dissecting the biggest issues that we've faced over the last 100 years and examining their causes and effects, and one of those issues is class struggle. Butler used speculative fiction to explore the possibilities, dangers, and undeniable truths of economics and humanity.

You'll Learn The Term "Afrofuturism," And Understand Why It Matters

Butler was so ahead of her time that the term "afrofuturism" didn't even exist before she started writing, despite the fact that her name is often associated with the aesthetic. Afrofuturism is combination of fantasy, history, science fiction, and magical realism as a means of examining the plight of people of color, past and present. And there is no one who has been able to pull it off in such spectacular fashion as Butler.

Speculative Fiction Will Become A Place Of Endless Possibilities

A lot of people shy away from science fiction. A lot of readers are afraid of the genre, or assume that it is all aliens and dystopias. But after reading Kindred (which transports you back to a 19th-century plantation) or Fledgling (a vampire science fiction novel), you'll know that science fiction is much more than space stations and robots. Science fiction can be anything, take place anywhere, and include everyone. After reading Butler, you will know that there is no place sci-fi can't take you.

You'll Understand What It's Like To Be An Outsider, And That It's OK To Be One

Octavia Butler was not only a woman, black, and dyslexic. She was all of those things, and overcame even bigger obstacles, but she never apologized for who she was, and she never let it hold her back. Her characters echo her endurance and self-acceptance, and prove that being an outsider isn't the worst thing in the world, and can maybe be one of the best things about you.

After Octavia Butler watched Devil Girl From Mars ― a cheesy and flat-out bad science fiction movie ― she decided that she could write something better. So she did. And when there was no one like her, no other black female science fiction writers, she became one. She became not only one of the best women in the field, but one of the best writers, period. No man ― no person ― could hold her back.

One of the many, many benefits of reading is that it puts you in the shoes of someone else, and it can actually make you more empathetic. And this is especially true when you read Octavia Butler. Her exploration of life and relationships of every kind of person, from slaves to the ooloi (someone who is neither male nor female, but a third gender), truly allows you to not only see but also understand the world through someone else's eyes.

More like this
24 History-Making Black Women You Probably Didn't Learn About In School
By Ayana Lage and JR Thorpe
25 Inspiring Quotes From Black Women To Celebrate Black History Month
By Kyli Rodriguez-Cayro and JR Thorpe
Jessica Simpson On The Time She Was Pursued By A Backstreet Boy & An *NSYNC Member
By The Editors
Netflix Shut Down 'Bridgerton' S3 Rumours About A “Very Dark” Storyline
By Bustle
Get Even More From Bustle — Sign Up For The Newsletter
From hair trends to relationship advice, our daily newsletter has everything you need to sound like a person who’s on TikTok, even if you aren’t.