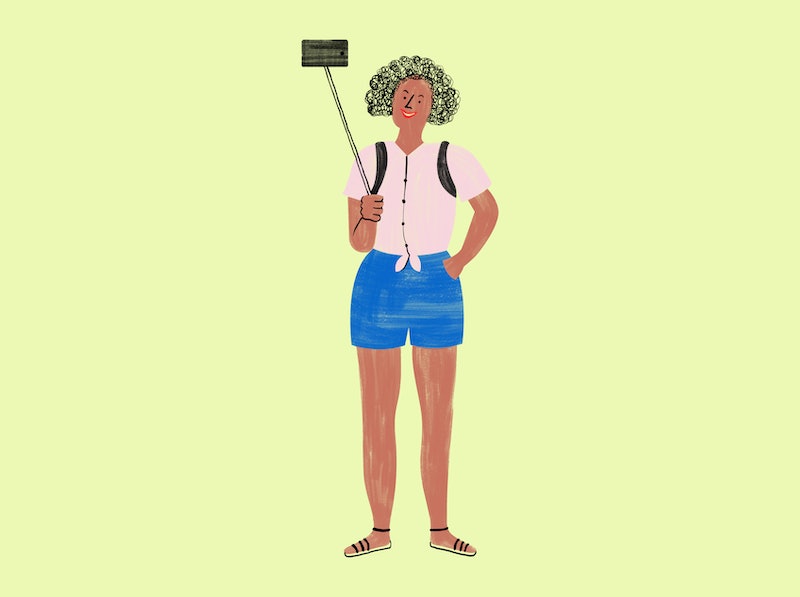 It's a commonly held belief that Millennials are narcissistic, but is it actually true? It turns out that there might be something to the stereotype — but there's also a twist. New research presented last week at the Society for Personality and Social Psychology (SPSP) in San Diego suggests that Millennials do, in fact, believe that they are more self-absorbed than generations past; however, they don't like being told that they're narcissistic — unless they actually are narcissists, in which case they don't mind the label quite so much. Figures, right?

Doctoral candidate at Case Western University Joshua Grubbs, who was the lead researcher on the study, is a Millennial himself, so he was interested in seeing whether the stereotype of Millennials being full of themselves had any truth to it. He conducted seven studies, where both Millennials and those from older generations were asked to rank themselves and the other generations on their levels of narcissism; additionally, the participants were asked to react to the media's perception of how values evolve over generations — including reacting to a controversial article published by TIME in 2013 entitled "Millennials: The Me Me Me Generation." These surveys were conducted both in person and online.

In terms of who was offended by being labeled a narcissist, the results of these experiments found that, across the board, people don't really like being called narcissistic. "If you say something just terrible about the generation, they tend to be somewhat offended as a general rule," Grubbs said according to LiveScience. However, those who actually did score highly on the Narcissistic Personality Inventory didn't seem to mind the label quite as much as those who didn't. As Grubbs put it, this aligns with previous findings about narcissists — that is, they know they're full of themselves, but they think that they're absolutely justified in being so.

If you were hoping this study was a fluke, I'm going to have to burst your bubble here and tell you that a lot of other research on Millennials' attitudes and levels of self-absorption have derived similar conclusions to Grubbs'. A 2015 study by the Pew Research Center found that 59 percent of Millennials described their generation as being "self-absorbed," and viewed themselves more negatively than generations past viewed those in their generation. "[Millennials] stand out in their willingness to ascribe negative stereotypes to their own generation,” the researchers said. Additionally, the Reason-Rupe poll found in 2014 that an overwhelming majority of Americans, 65 percent, said that they felt Millennials were "selfish" and "entitled."

However, it's not all bad news, since many studies and surveys have also found that Millennials see themselves as being driven to succeed, are more likely to be willing to take on the role of being caregivers for their elders, and are dedicated to a fault. There are also other factors at work here; bear in mind that the Reason-Rupe poll found that parents of children growing up in the Millennial generation fit the description of Helicopter parents, constantly hovering over their kids every move. This growing anxiety on the part of parents could be linked to our need for attention and self-focus, according to the researchers.

So hey, if you think your narcissistic, perhaps you have your parents to blame for yet another aspect of your life that sucks.

More like this
10 Thanksgiving Alternatives You Can Celebrate This Month
By Katie Mitchell
Read Dan Levy's Heartbreaking Message After The Club Q Shooting
By Stephanie Topacio Long
These 4 Zodiac Signs Have Naturally Inquisitive Souls
By Nina Kahn
The 3 Most Gullible Zodiac Signs, According To Astrologers
By Kristine Fellizar
Get Even More From Bustle — Sign Up For The Newsletter