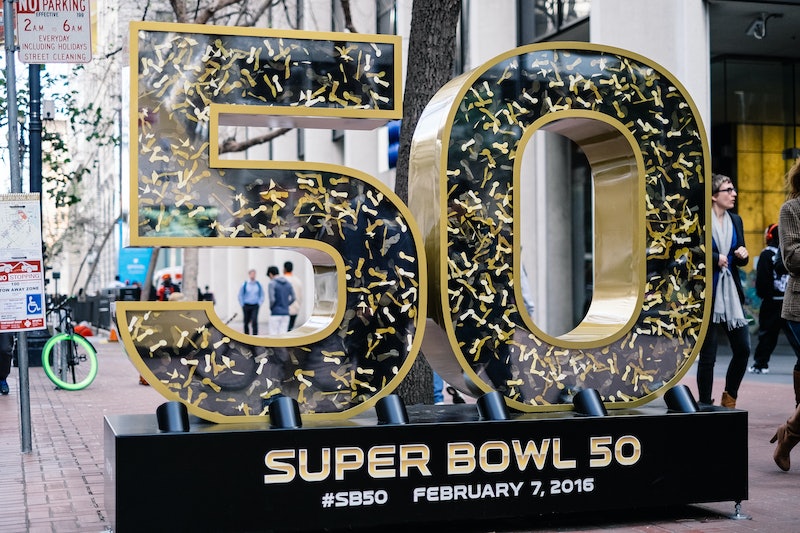 Do you smell that? The unmistakable scent of buffalo wing sauce and nacho cheese whirling around in the air? That can only mean one thing: Super Bowl Sunday is but a few days away. Now, there are a lot of details to square away before the big game: Where you will watch? Who will make food? Who will bring drinks? Which team will you root for? Which prop bet is the most hilarious? If you are throwing a Super Bowl party, there is one deet that is almost as crucial as the snacks 'n' beverages details: What's your pre- and post-game music sitch?

Whether you are looking for some tuneage to fire up before the game, a soundtrack to play during the game, or some jams for a post-Bowl soirée, I think these songs will suit your Super Bowl 50 get-together just fine.

2. “The Super Bowl Shuffle” By The Chicago Bears Shufflin’ Crew

30 years later, and this song is as poppin' as ever!

3. “The Final Countdown” By Europe

As Kevin McCallister once said, "This is it. Don't get scared now."

4. “I Can Go The Distance” From Hercules

This one's for Cam Newton and Peyton Manning.

Best of luck with your Super Bowl Squares pool.

10. “Carolina In My Mind” By James Taylor

11. “Back In The Saddle Again” By Gene Autry

13. “Pump Up The Jam” By Technotronic

14. “Get’cha Head In The Game” From High School Musical

Yeah, yeah, I know this is about basketball, but I dare anyone to listen to this record before any sporting event and not feel totally amped.

16. “The Pizza Song” From Cartoon Planet

Your fellow Super Bowl revelers will thank you for this one.

Merry football to us all, and to all a goodnight.

More like this
'Traumazine' Has Megan Thee Stallion Twitter Dancing Through Their Feelings
By Grace Wehniainen
Lauv Is No Stranger To Taylor Swift, Drake, Ed Sheeran, & Fame
By Alyssa Lapid
An Ultimate Guide To The Music Of 'Rap Sh!t'
By Brad Witter
Naomi Osaka & Emma Raducanu’s Experiences Have Inspired A New Amazon Show
By El Hunt
Get Even More From Bustle — Sign Up For The Newsletter