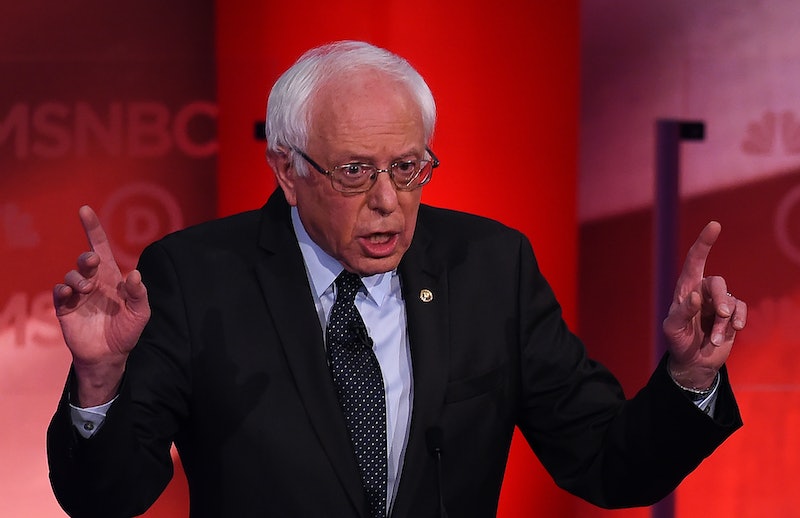 Presidential candidate and Vermont senator Bernie Sanders has given Americans a whole lot to think about during the more-than-a-few primary debates that have taken place so far. But his experience and proposed policy changes for the country are nothing compared to the glorious facial expressions and gesticulations the presidential hopeful has so graciously gifted both debate attendees and viewers at home. Just when you thought nothing could beat the Bernie side-eye from the last Democratic showdown, here are all the Bernie Sanders finger-waving tweets and memes that give new meaning to being the boss of dismissive.

Maybe it's Sanders' age that has given him the wisdom and sophistication to pull off such spot-on gestures and glances. The candidate did get asked by debate moderator Rachel Maddow about events that went down in 1964 (forget that the question was actually concerning a past presidential hopeful), so Bern has had a few decades to perfect the "nuh-uh" finger wag.

The reason that the Sanders finger wave is so enviable? It's all in the nuance. When Bernie wags that pointer finger back and forth, he isn't only dismissing whatever his opposing candidate is saying, and he isn't just asking the moderators to be called on for a rebuttal — he's killing two birds with one stone.

Asking For Service At The Sizzler

The animated finger-waving does resemble the gesture of an annoyed restaurant-goer who has sadly been forgotten by the waiter. The only difference is that Bernie's finger wag is fierce enough to get the attention of the entire wait staff. Oh, and the manager too.

Bernie Likes To Be Called On

This could be dangerous, since Bernie really likes to put up his pointer despite the fact that there's really no one else the moderators could call on to speak next.

The former NBA player gave everyone the tutorial on the finger wag a few years back. Clearly, Sanders has improved on the gesture further since Mutombo's performance.

Can this actually be a thing? Maybe children across the country can finally learn from a young age exactly what to do when someone is talking pure nonsense and it's time to set the record straight.

Now that Clinton and Sanders have agreed to several more debates, there's no telling what Bern will give Americans next in the catalog of Sanders sassy signals.