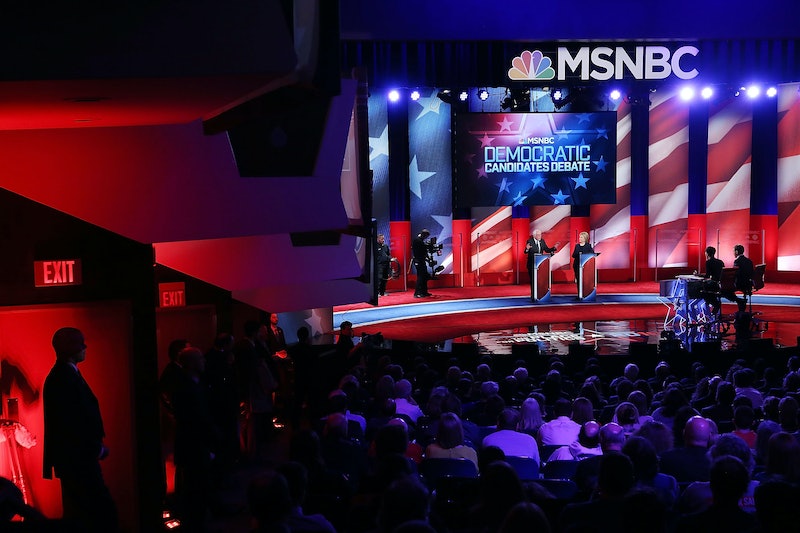 If you watched the fifth Democratic presidential debate on Thursday night, you got to see Hillary Clinton and Bernie Sanders discuss a lot of things ― Wall Street, campaign finance, foreign policy, what it means to be progressive, and even whether they'd consider each other for vice president. But there was one topic that the ostensibly liberal cable news channel hosted the debate failed to ask a single question about: MSNBC didn't ask about Black Lives Matter or racial justice during the debate.

If that surprises you, well, it should. In the world of cable news, whatever the channels like to advertise about themselves, the political breakdowns are clear: Fox News is a right-wing media outlet, while MSNBC mans the left-wing, and CNN is... well, something else.

Which is precisely why the omission of any question on the Black Lives Matter movement, the racial justice and police violence issues they've tackled, or the tangible policy steps that could be taken to address them was so shocking. Even Fox News put a question to the Republican candidates, and past Democratic debates have at least touched on the movement, as well. But surprisingly enough, with Rachel Maddow and Chuck Todd sitting at the moderators' desk, anyone hoping for a conversation about the value of black life and how to protect it was left out in the cold.

Obviously, no mere hours-long debate could possibly cover every issue relevant to every constituency in American life. At the end of the debate, which ran longer than its advertised 90 minutes, Todd mentioned that they'd tried to get in all the questions they could, so who knows ― maybe somewhere in their stack of papers, there was a trenchant, illuminating question that could've drawn Sanders and Clinton into a serious conversation about policy reforms to prevent racist policing and use-of-force against black Americans.

But when you consider some of the questions that did get asked, you at the very least would have to fault Maddow and Todd for their priorities. More conversation about Clinton's email controversy, which both candidates were clearly not interested in speaking deeply about? Asking them whether they'd run together on a unity ticket? Asking Clinton which federal agencies she'd abolish and which new ones she'd create, complete with a Rick Perry joke? There were some very good questions brought forward on Thursday night, but some incredibly empty duds, too.

And however harsh it sounds, that's not cutting it. It's not forgivable. There's already a ragged, bleeding edge within the progressive movement right now, and it's being felt within the Democratic primary race ― a sense on the part of many activist-minded black Americans that mainstream white progressivism is letting them down, whether in the media, or in the halls of power. And while the disproportionate killing of a certain race of people by officers of the state might not seem as all-encompassing an issue as, say, climate change, it's still one of the few truly existential struggles in America today.

The upshot is that people are dying, and begging for someone in their preferred political party to tell them what they're actually going to do to stop it. And when the cable channel that's supposed to be the progressive one can't even muster a single question about it, even while running over their scheduled time? Maybe it was an innocent mistake, or maybe it was a flat-out faceplant, but you can say this much: You can't blame any black activists who feels like this space is not for them.