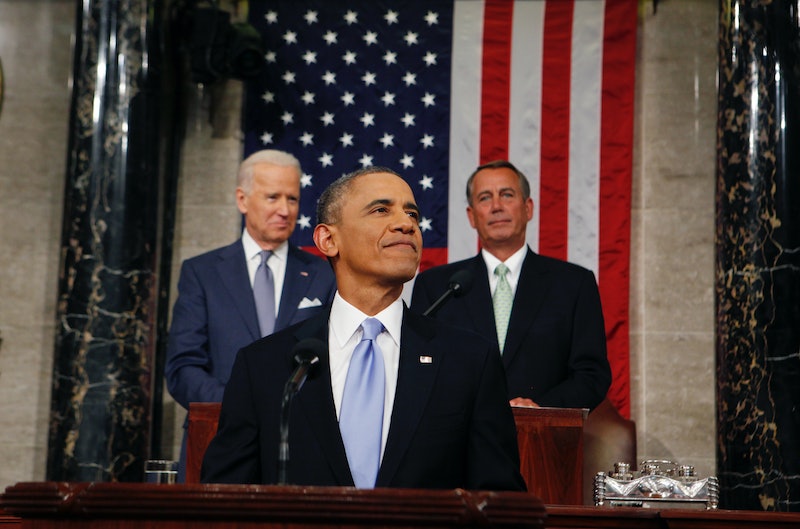 President Obama didn’t have much reason to be excited about delivering his fifth State of the Union address as he stepped onto the podium Tuesday night. Coming off the worst year of his presidency, he was tasked with outlining his vision for the next three years to a Congress that, regardless of what that vision was, almost certainly wasn’t going to do anything to help him implement it. Joys of the bully pulpit aside, that’s not something to look forward to.

And yet the president was fired up and full of pep on Tuesday, not displaying any of the fatigue and frustration he’s undoubtedly been feeling lately. This was probably due to the simple fact that much of the agenda Obama laid out was premised on bypassing Congress entirely. While there were several entreaties to the legislative branch to take action, Obama’s core message to Republicans was clear: Either do something and help out, or get out of the way.

Perhaps more significant than the “screw Congress” angle was the political angle: This speech — particularly the elements that focused on income inequality — was carefully crafted to set up the Democrats for success in the midterm elections later this year.

While the State of the Union ostensibly serves the purpose of reporting to Congress on, well, the state of the union, it also offers the president a rare opportunity to speak directly to Americans, uninterrupted, for an hour straight. It’s impossible for an occasion like that not to become political. The most significant takeaway from the speech may be the fact that Obama, despite having a horrible year, is far from a lame duck.

The most memorable line of the speech came in the section on the gender pay gap. “It’s time to do away with workplace policies that belong in a Mad Men episode,” a fiery Obama proclaimed. “Women make up about half our workforce, but they still make 77 cents for every dollar a man earns. That is wrong, and in 2014, it’s an embarrassment.”

These comments were received with a standing ovation (though in a truly tone-deaf moment, John Boehner didn't applaud when Obama called for equal pay for women) and for good reason: The pay gap is an embarrassment. From a policy standpoint, Obama didn’t unveil very much — just a general plea for businesses to stop discriminating based on gender. However, by focusing on the additional obstacles women face in America, a theme he touched on several times in the speech, Obama both gave voice to a cause he believes in and, in the process, helped shore up one of the Democratic Party’s most reliable voting bases (though Rand Paul's response speech made clear that Democrats probably don't have to worry about women flocking to the GOP any time soon).

Obama also spoke of the need to “strengthen the middle class and build new ladders of opportunity into the middle class.” His most significant announcement to this effect was an executive order mandating a $10.10/hour minimum wage for all federal workers and contractors; however, he also rolled out a new Treasury program, the awkwardly-titled MyRA, which will essentially be a basic a retirement account for Americans without access to an employer plan, and announced the formation of a new Joe Biden-led task force on improving federal job training programs.

In terms of direct effects, these are somewhat modest programs. Task forces often amount to nothing, and the details of the MyRA are still vague. The minimum wage increase won’t even begin to be phased in until 2015, and only applies to future contracts, not existing ones. Also, it’ll only affect 200,000 workers (although to those workers, it’s obviously a significant and welcome benefit).

But there’s a political purpose behind all of this as well. Democrats have made clear that they’re going to focus on income inequality during the midterms, and the centerpiece of this will be a push to raise the minimum wage — for everybody, not just federal workers. That, of course, would require an act of Congress, and while the prospects of the Republican-controlled House of Representatives putting that up for a vote are slim at best, that won’t stop Democrats from hammering their GOP opponents on the issue throughout the campaign (There’s good reason for them to think this will work — raising the minimum wage is ridiculously popular policy.)

By owning and embracing the goal of increasing the minimum wage, Obama is taking a big step to unify the Democratic Party and its messaging ahead of the midterms. The message: Democrats want to help you make more money, immediately, in the most direct way possible.

That’s the point Congressional Democrats will be driving home once the campaign starts in earnest, and their promises will have a lot more weight now that the sitting Democratic President has actually put a version of a minimum wage increase into action. The same goes for the MyRA and job training programs, which also seek to rectify income inequality: They all serve the purpose of highlighting that Democrats care about helping low-income Americans, and will take action to do so.

The president also mounted a vehement defense of the Affordable Care Act. This wasn’t too surprising, as he’s been doing that since the bill passed in 2010, but the way in which he framed the issue was, like the minimum wage increase, aimed at helping Democrats’ electoral prospects at the ballot box later this year.

Obama started out saying that “for decades, few things have exposed hard-working families to economic hardship more than a broken health care system,” thus tying it directly into the inequality theme. He told the story of Amanda Shelley, a single mother whose Obamacare coverage began on January 1st — and then required emergency surgery less than a week later. And he highlighted Congress’s impotence yet again by reminding Republicans that the law is, at this point, irreversible:

I know that the American people aren’t interested in refighting old battles. So again, if [Republicans] have specific plans to cut costs, cover more people, and increase choice – tell America what you’d do differently. Let’s see if the numbers add up. But let’s not have another forty-something votes to repeal a law that’s already helping millions of Americans like Amanda. The first forty were plenty. We got it. We all owe it to the American people to say what we’re for, not just what we’re against.

Obama isn’t just poking Republicans in the eye, although he certainly is doing that. He’s also practically handing Democratic candidates a stump speech to use later this year when their Republican opponents attack them on Obamacare.

While the State of the Union ostensibly serves the purpose of reporting to Congress on, well, the state of the union, it also offers the president a rare opportunity to speak directly to Americans, uninterrupted, for an hour straight. It’s impossible for an occasion like that not to become political. The most significant takeaway from the speech may be the fact that Obama, despite having a horrible year, is far from a lame duck. He telegraphed loud and clear his intention to be aggressive during the remainder of his presidency, both in implementing the policies he believes in and helping his fellow Democrats do the same.