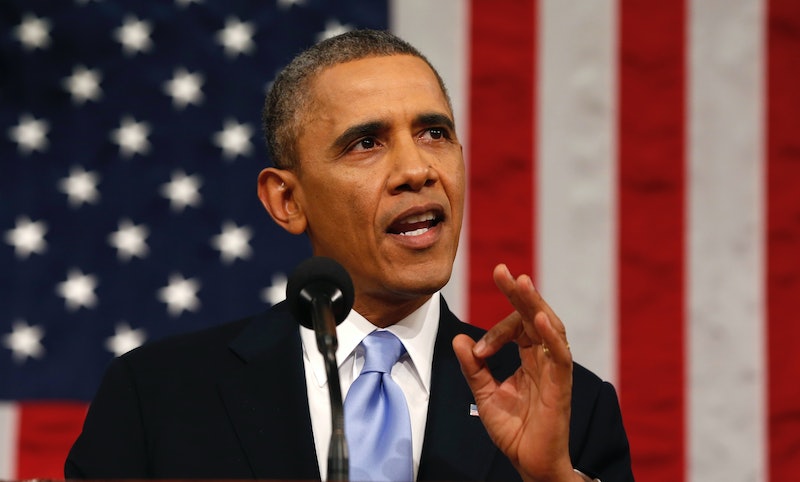 2013 might have been the worst year yet of Barack Obama's presidency. Tuesday night's State Of The Union address was his chance to promise things could, and would, turn around. In his same speech a year ago, the president laid out an array of goals: In the 12 months since, most have been stalled, deadlocked, or seen little improvement. The major exception was the launch of the Affordable Care Act, which was plagued by a mortifyingly botchy rollout.

On Tuesday night, Obama laid out many of the same goals he described last year, but with a renewed commitment to executive action and solving the issue of income inequality — and the necessity of dodging Republican opposition in order to keep his promises.

Here's what you need to know about Obama's State of the Union address...

After an inability to compromise shut down the federal government last September, Obama wasn't shy about blaming the Republican Party for gridlocking Washington, D.C.. And he still isn't.

For several years now, this town has been consumed by a rancorous argument over the proper size of the federal government. It’s an important debate – one that dates back to our very founding. But when that debate prevents us from carrying out even the most basic functions of our democracy – when our differences shut down government or threaten the full faith and credit of the United States – then we are not doing right by the American people.

As President, I’m committed to making Washington work better, and rebuilding the trust of the people who sent us here.

In short? Obama's saying: The Republican Party destroyed your trust in the government and shut everything down, simply because they flat-out refused to compromise — the most fundamental criteria of a working democracy.

Obama listed some positive economic gains: "The lowest unemployment rate in over five years. A rebounding housing market. A manufacturing sector that’s adding jobs for the first time since the 1990s. Our deficits – cut by more than half." He added that America remained full of opportunity, and that opportunity is only increasing.

But, as the Guardian points out, a key theme in Obama's address was that there are forces pulling back that growth of opportunity. To that end, Obama stressed that he'd be pushing executive action if necessary.

But what I offer tonight is a set of concrete, practical proposals to speed up growth, strengthen the middle class, and build new ladders of opportunity into the middle class. Some require Congressional action, and I’m eager to work with all of you. But America does not stand still – and neither will I. So wherever and whenever I can take steps without legislation to expand opportunity for more American families, that’s what I’m going to do.

Sitting behind Obama, the House Speaker got his own shout-out.

Here in America, our success should depend not on accident of birth, but the strength of our work ethic and the scope of our dreams. That’s what drew our forebears here. It’s how the daughter of a factory worker is CEO of America’s largest automaker; how the son of a barkeeper is Speaker of the House; how the son of a single mom can be President of the greatest nation on Earth.

Once and for all, said Obama, the "debate" over humans causing global warming is over. And now that we know that, and have accepted it, we need to figure out what to do about it.

The shift to a cleaner energy economy won’t happen overnight, and it will require tough choices along the way. But the debate is settled. Climate change is a fact. And when our children’s children look us in the eye and ask if we did all we could to leave them a safer, more stable world, with new sources of energy, I want us to be able to say yes, we did.

This part of the speech was met with huge applause, and so it should be. Obama called for greater gender equality in the workplace, and a renewed focus on women's rights in general. (Of course, there were no details on how that will happen.)

Today, women make up about half our workforce. But they still make 77 cents for every dollar a man earns. That is wrong, and in 2014, it’s an embarrassment. A woman deserves equal pay for equal work. She deserves to have a baby without sacrificing her job. A mother deserves a day off to care for a sick child or sick parent without running into hardship – and you know what, a father does, too. It’s time to do away with workplace policies that belong in a “Mad Men” episode.

On the minimum wage

In the coming weeks, I will issue an Executive Order requiring federal contractors to pay their federally-funded employees a fair wage of at least $10.10 an hour – because if you cook our troops’ meals or wash their dishes, you shouldn’t have to live in poverty.

Except he does, actually, need Congress to raise the minimum wage for all workers. So he implored:

Today, the federal minimum wage is worth about twenty percent less than it was when Ronald Reagan first stood here. This will help families. It will give businesses customers with more money to spend. It doesn’t involve any new bureaucratic program. So join the rest of the country Say yes. Give America a raise.

Despite a school shooting today and gun control being a gigantic, divisive issue, Obama dedicated just two sentences to it.

Citizenship means standing up for the lives that gun violence steals from us each day. I have seen the courage of parents, students, pastors, and police officers all over this country who say “we are not afraid,” and I intend to keep trying, with or without Congress, to help stop more tragedies from visiting innocent Americans in our movie theaters, shopping malls, or schools like Sandy Hook.

Obama swore to veto any new Iran sanctions while talks were ongoing, regardless of Congress' opinions on the matter.

But let me be clear: if this Congress sends me a new sanctions bill now that threatens to derail these talks, I will veto it. For the sake of our national security, we must give diplomacy a chance to succeed. If Iran’s leaders do not seize this opportunity, then I will be the first to call for more sanctions, and stand ready to exercise all options to make sure Iran does not build a nuclear weapon.

The president called on Congress to make 2014 the year that the U.S. finally (finally!) closes Gitmo.

This needs to be the year Congress lifts the remaining restrictions on detainee transfers and we close the prison at Guantanamo Bay – because we counter terrorism not just through intelligence and military action, but by remaining true to our Constitutional ideals, and setting an example for the rest of the world.

On the war in Afghanistan

Obama reaffirmed once more that the twelve-year war in Afghanistan is set to end this year.

Together with our allies, we will complete our mission there by the end of this year, and America’s longest war will finally be over... If the Afghan government signs a security agreement that we have negotiated, a small force of Americans could remain in Afghanistan with NATO allies to carry out two narrow missions: training and assisting Afghan forces, and counterterrorism operations to pursue any remnants of al Qaeda. For while our relationship with Afghanistan will change, one thing will not: our resolve that terrorists do not launch attacks against our country.

The President ended the speech with the moving story of a wounded veteran, Cory Remsburg, who was struck by a roadside bomb in Afghanistan.

My fellow Americans, men and women like Cory remind us that America has never come easy. Our freedom, our democracy, has never been easy. Sometimes we stumble; we make mistakes; we get frustrated or discouraged. But for more than two hundred years, we have put those things aside and placed our collective shoulder to the wheel of progress – to create and build and expand the possibilities of individual achievement; to free other nations from tyranny and fear; to promote justice, and fairness, and equality under the law, so that the words set to paper by our founders are made real for every citizen.