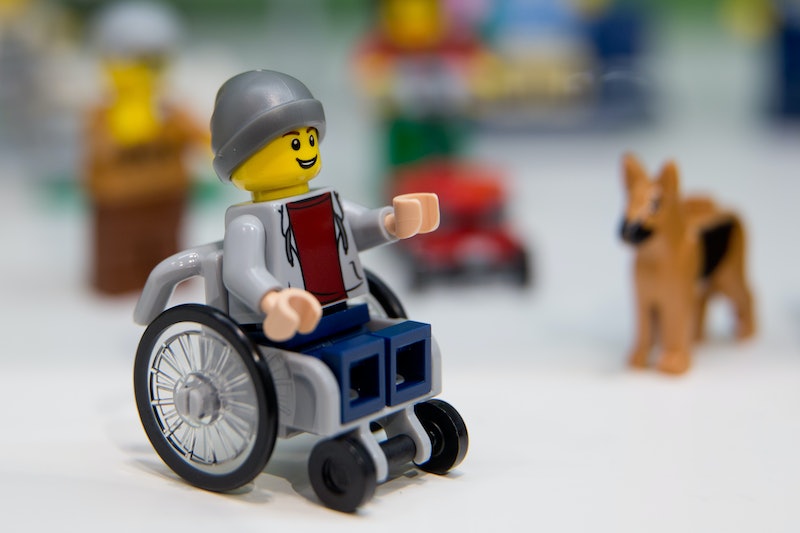 With all eyes on Tuesday's New Hampshire primary, the candidates are facing growing demands from all sides to fully articulate their platforms, so that voters can start making some tough decisions. However, one group of voters hasn't been well-represented in discussions about the upcoming presidential race. In fact, this group is being largely ignored by both the candidates and the media: the disability community, which accounts for nearly 20 percent of Americans. The candidates, and the American public, need to think about what disabled Americans need, because many of their concerns dovetail with those of the larger country as a whole — and disability is the only minority status that can be acquired at the blink of an eye.

Experiences of disability are, of course, incredibly diverse. While there's a broad umbrella over a community that shares the commonality of living with a variety of impairments (from amputations to congenital disorders), disability is not a monolith. However, there are some key issues that are of vital concern to a significant proportion of the disability voting block, and many disabled voters are keeping their eyes on how candidates address them. More than 15 million disabled people voted in the 2012 cycle, and if the disability community mobilizes this year, it could become a considerable force, with many more showing up at the polls. Voting organizers are certainly hoping so, with groups like RespectAbility providing candidate information and encouraging disabled people to register — so here are seven issues relevant to disabled voters that are worth focusing on.

Jobs are a big priority for most voters, but they are an especially important issue for many disabled people. The disability unemployment rate — which has only been tracked since 2008 — was at 10.8 percent in January, double the unemployment rate of nondisabled people. Many disabled people have trouble securing work, despite the fact that they want to be in the workforce. Some are unable to work because of the benefits penalty (discussed below), while others are kept out of the workforce by systemic discrimination, despite the fact that such discrimination is illegal under federal law. It's not just difficult to get hired; it's also hard to keep a job, as disabled people may experience hostility when it comes to asking for accommodations, negotiating pay and raises, and working with other employees.

Historically, many people approached disability employment as an issue to be solved under the "sheltered workshop" model, in which disabled people labor in segregated workplaces, often producing very basic products or services. One modern example is Goodwill: as Al Jazeera America noted in a 2014 expose, the company employs disabled people and pays them "pennies per hour." This kind of discrimination is possible when employers take advantage of a loophole in the Fair Labor Standards Act that allows companies to provide subminimum wage to disabled people on the grounds that they can't do the work of a "regular" worker. The "sheltered workshop" model is discriminatory — those who cannot work independently can thrive with supported employment, in which part of an employee's wages are paid by a third party organization and workplaces are encouraged to hire and mentor disabled staff. People who need aides and assistants or interpreters also belong in the workplace — would you try telling Marlee Matlin she shouldn't have been on the set of Children of a Lesser God because she needed to use a sign language interpreter?

The Americans with Disabilities Act stressed the importance of independent living for the disability community, affirming that people had a right to live in their communities rather than being forced to live in nursing homes. Similarly, Olmstead v. L.C., a critical Supreme Court case, reiterated that disabled people have a right to community-based living. In practice, however, this has not worked out. The structure of the benefits system funnels disabled people into institutions, despite the fact that it's significantly cheaper to support people living in their communities — contrast a $60,000/year nursing home bill with a few thousand dollars for someone who needs an aide for a few hours every week.

Disabled people want to engage with society, rather than being hidden away. Many, however, are stuck in institutions because it's the only way to access the support they need. Or they're trapped in their homes by inaccessible design, living in communities that lack curb cuts, ramps, sufficient doorway clearance, and other basic measures. Consequently, rather than being an active and vibrant part of their community, disabled people often exist as a ghost population, contributing further to a sense of isolation that many disabled people feel. And those issues of inaccessibility include polling places — one study found that 73 percent of polling places were less than fully accessible, keeping many disabled people from casting their votes.

Though many non-disabled people don't even know that this issue exists, this is a problem that consistently impacts the disability community. The structure of disability benefits in the United States is such that when people go to work, inherit funds, or have other sources of independent income (including income from a spouse), they often lose their government benefits. This can create enforced poverty in the disability community, as the costs for health care, aides, rent, and other needs are very high — few disabled people can afford them on their own, even with jobs or partners. People who want to go to work, participate in the economy, or even get married are thus effectively financially punished. The result is often that disabled people are forced into unemployment to avoid losing these critical benefits. The ABLE Act, signed by President Obama in 2014, aims to address this by allowing people to use designated savings accounts without losing benefits, but it's an imperfect solution at best.

The financial stresses that the benefits penalty creates aren't the end of it; it can also lead to stereotypes about disabled people that create very real problems. For many members of the general public, lack of awareness regarding how the benefits penalty functions leads to the idea that disabled people are "scroungers" who rely too much on the government, or that disabled people are committing fraud to access benefits — despite the fact that fraud is so rare that the government often feels that the costs of investigating it aren't worth it in relation to the amount of claims recovered. This incorrect stereotype has serious implications for the disability community, however, as it contributes to hostile attitudes that sometimes even escalate to violence.

Autism has become a cause célèbre in American culture, sometimes to the exclusion of other disabilities (note: not all autistic people identify as disabled). While many people busy themselves debating causes and cures — often over the voices of self-advocates who don't want to be "cured" and see their autism as an integral part of their identity, rather than a flaw — autistic people of all ages are facing serious social shortfalls. The bulk of autism funding is dedicated to research, rather than to providing direct services for autistic people who need community supports, and autistic adults are often erased from the conversation entirely.

Raising an autistic child can be extremely expensive, depending on where that child lies on the autism spectrum. Some children need speech and occupational therapy, supports in school, counseling, and a variety of other services. It can cost as much as $2.4 million to raise an autistic child in a healthy, happy, safe environment. Autistic adults, some of whom benefit from services like aides to help them live independently, similarly lack supports.

A hot-button issue in the news lately, police violence disproportionately affects disabled people as well as communities of color — and in fact, there's considerable overlap between the two when it comes to interactions with police that go horribly wrong. Many Black and Native American people with mental illness, cognitive disabilities, and other disabilities wind up in situations with the police that turn fatal. For example, over 50 percent of people shot and killed by U.S. police have mental health problems. Police officers have also been accused of tipping people out of wheelchairs, mocking disabled children, and physically abusing homeless mentally ill people.

The disability community wants to see serious engagement with the issue, including concrete plans for reform. Very few police departments offer training in disability, and only one state, Maryland, requires it. Maryland, notably, is centering the voices of self-advocates in its training, having police officers interact directly with disabled people to learn more about how to work with disabled subjects.

The United States is experiencing an education crisis, and it's especially acute for disabled students — nearly three million disabled children need accommodations and accessible education in U.S. schools. This includes educational materials for blind and visually impaired students, accessible media for D/deaf students, physically accessible schools for people who use mobility aids, and accommodations for those with developmental, intellectual, and cognitive disabilities. Too often, schools leave their disabled students behind.

More chillingly, restraint and seclusion continue to be a problem in U.S. schools. Rather than being mainstreamed (included in conventional classrooms), disabled children are often sidelined to separate classrooms and deprived of learning opportunities. The practice of physically restraining disabled children, particularly those with intellectual and cognitive disabilities, is shockingly common, and abuse like hitting students, throwing things at them, and caging them is enough of an issue that Texas recently passed a law to require cameras in special education classrooms.

25 percent of the U.S. population experiences symptoms of mental illness during any given year, ranging from severe mental illness (SMI) to situational depression — concurrent with or independently of disability (some mentally ill people identify as disabled because of their mental health conditions, others do not). Yet, access to mental health services in the United States is extremely poor, especially for low-income Americans and the homeless community. Over 550,000 Americans can't get mental health care due to affordability issues, and, notably, the largest provider of mental health services is the criminal justice system.

Sadly, mental health care often seems to only come up in political discussions in the context of acts of mass violence, which are usually (incorrectly) blamed on mental illness. Drives to improve access to treatment options within this setting often only serve to further stigmatize mentally ill people, by creating a false corollary between mental health and violence. Many members of the mentally ill community want to see services made a priority — instead of just being used as a punching bag when the country is reeling in the aftermath of terrible acts of violence.