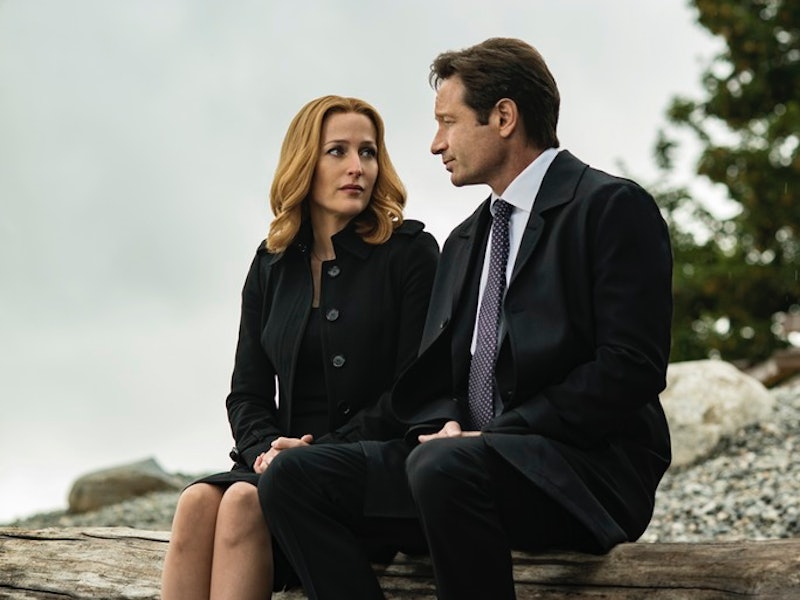 After a humorous, deliberately campy "monster of the week" episode, we had to know that things wouldn't stay light-hearted for long. Sure enough, just minutes into the Feb. 8 X-Files episode "Home Again," Scully experiences a personal tragedy that reopens a number of painful, unresolved issues. She and Mulder have just arrived at a crime scene in Philadelphia when she receives a phone call from her older brother, Bill, in Germany. She looks rattled before even answering the call, because he initially shows up as "William" in her phone. (Although he's named after Mulder's father, Scully's son also shares a name with her own father and brother.) Scully's mother has suffered a heart attack back home in Washington, D.C. so she rushes to her side and the death of Scully's mom is an incredibly sad moment on The X-Files.

Although she wasn't a main character, Margaret was important during the original series. She influenced Scully's Catholic faith and she was protective of both her daughter and Mulder, despite her reservations about Scully's line of work. When Scully arrives at the hospital, Margaret is unconscious — but the doctor tells her that she briefly regained consciousness and asked for Charlie. Scully's youngest brother was barely mentioned in the series and she explains that he's estranged from the family and she doesn't even know how to reach him. She appears distressed that her mother didn't ask for her, Bill, or her grandchildren. Scully references her own coma from Season 2 as she begs her mother to not "go home yet" because she needs her. She recalls the moment Mulder sat by her bedside and told her, "I don't know if my being here will help bring you back. But I'm here," most likely because she hopes her presence will bring her mom back.

As she sifts through Margaret's personal effects, Scully finds a necklace with a quarter on it that she's never seen before. During another phone call with Bill (who, despite not making an onscreen appearance, seems to be as difficult in 2016 as he was in the '90s), she clarifies that she and Margaret had agreed after Scully's own coma that she wanted to have all available measures taken to keep her alive. But, the doctor has more bad news for her — unbeknownst to Scully, Margaret amended her living will last year and it means she needs to be taken off life support. Bill calls her again, but ultimately the only person who joins Scully at the hospital is Mulder.

Her distress is paired with confusion — she asks Mulder a series of unanswerable questions, like why Margaret would ask for Charlie instead of she or Bill and why she'd change her will without telling Scully. She struggles to decipher what the necklace and the date on it might have meant to her mother. The two shared a trusting and powerful bond and Scully was shown confiding in Margaret multiple times, such as when she initially realized she was infertile. Scully's questions illustrate that, even in healthy family relationships, there are often so many secrets — and we don't even realize it until a tragedy like this occurs. While she watches Margaret be taken off life support, Scully tearfully tells Mulder, "I don't care about the big questions right now. I just want one more chance to ask my mom a few little ones."

As Mulder and Scully sit at Margaret's bedside waiting for the inevitable, Charlie calls his sister. She pleads with him to say "something, anything" to Margaret and, "do what I can't do. Bring her back to us." She puts her brother on speakerphone and he speaks briefly, which prompts Margaret to open her eyes. Scully drops the phone, and Margaret turns to Mulder, grabs his hand and tells him, "My son is named William, too" before dying as Scully desperately begs her to come back.

Almost immediately, hospital staff come into the room with a gurney to take her body and Scully panics as she repeatedly screams at them to "get that out of here." It's yet another heart-wrenching moment, because it's so out of character and it's finally sunk in that Margaret is gone for good. She's lost her mother and now her "little questions" (which are actually big ones) will never be answered. Mulder pulls her away to comfort her and, as she continues to clutch the mysterious necklace, she sobs about the fact that Margaret's last words were about "our child... her grandchild that we gave away."

As she sees her mother's body being taken away for good, Scully orders Mulder to drive them back to Philadelphia because she needs to work. Despite his repeated protests, Scully grabs her belongings and storms out of the hospital leaving him looking more helpless than ever. The pair returns to the crime scene, where they eventually interview the artist who created the episode's non-human killer.

During this scene, it initially appears as though Scully is not listening to him at all. She gazes into nowhere and experiences a series of flashbacks, all related to William — his birth, the first time she realized he had alien powers, and the moment she told Mulder that she had given him up for adoption. But, as it turns out, she heard every word and asserts that: "You were responsible. If you made the problem, then you're responsible. You put it out of sight so that it wouldn't be your problem. But you're just as bad as the people that you hate." She's clearly speaking to herself more than the artist, as we know from previous episodes that she hates herself for her decision.

In the episode's final scene, Mulder and Scully sit by the water with Margaret's urn at her feet as she reflects on her mother's death and William's adoption. It's unclear whether either of her brothers even came back to D.C., but this moment illustrates that, both personally and professionally, it's often Mulder and Scully against the world. She tells him that she knows now why Margaret asked for Charlie — even though they were estranged, he was still her responsibility and she needed to know before she left this earth that he was OK. She relates it to Margaret's words about William: "That's why she said what she said to us. She wanted to make sure that we'd be responsible and know that William's OK even though we can't see him." Again, this raises the question of whether or not William will make an appearance this season — Scully is clearly determined to get confirmation that her child is safe, but she's wary that a reunion would put his safety at risk.

She goes on to tell Mulder that she believes he'll find the answers to all the biggest mysteries and she'll be by his side when he does. But her own mysteries, which all relate to her family, will never be answered. She wonders if William thinks of her, if he's ever been afraid and wished she was there, and whether or not he doubts himself because his birth parents gave him up for adoption. Most significantly, she wonders "what questions does he have of me, the same that I have of this quarter." Whether we're close with our family members or haven't seen them in years, there will always be secrets, unanswered questions, and unspoken truths. In fact, familial mysteries are so complex that even the most convoluted alien and conspiracy mysteries seem simple in comparison.

This dialogue is significant not just to the revival, but to the series as a whole. Scully's words are so raw and honest, and they're also incredibly relatable — although it's safe to say most people don't lose their children to government conspiracies, many parents are faced with painful, complex decisions about how to ensure their children have the best lives possible. Scully's main reason for giving up William was clearly his safety, but she also recognized that he could never grow up normally no matter how many measures she took to protect him. And, parents who raise their children under normal circumstances still doubt themselves. When Scully reflects to Mulder about her mysteries, they extend beyond William — she's so visibly confused about all the things Margaret withheld from her and why. Often, so much is left unspoken and we regret it deeply when it's too late.

I think this is one of the reasons that The X-Files resonates with so many people on an emotional level. We love the mystery, the action, and the quest for the truth, but that's not the only explanation for why so many people are deeply invested in the show 23 years after its premiere. Mulder and Scully's personal struggles are often deeply relatable, even if they stem from highly unusual circumstances.

At its core, the show is about family and interpersonal relationships just as much as it's about UFOs and government conspiracies. They don't get as much screentime or discussion, but they're always present and they deeply influence the overarching mythology of The X-Files. As we all know, Mulder's obsessive mission (both personally and professionally) is driven by the abduction of his younger sister when they were children. The only person who matters to him as much as Samantha is Scully, and the two essentially became like family long before their relationship turned romantic — so when she, too, was victimized by the conspiracy, it increased his obsession and his determination to uncover and expose "the truth."

Although Scully's questions about her mother will remain forever unanswered, there's still hope that she'll find answers and a sense of peace when it comes to William. At this point, so much emphasis has been placed on Mulder and Scully's son that I have to believe there will be some resolution during the finale. Scully and Mulder have already suffered so much and, at the very least, they deserve to have these questions answered.

More like this
'The Summer I Turned Pretty' Book Ending Is An Emotional Rollercoaster
By K.W. Colyard
The Future Of 'All Creatures Great & Small' Is Confirmed & Wedding Bells Are Ringing
By Rebecca Fearn and Frances Stewart
A New Season Of The Midwich Cuckoos Could Be Coming “To A Town Near You”
By El Hunt
“The Door Is Always Open” For Another 'Breaking Bad' Spin-Off, Says AMC Boss
By El Hunt
Get Even More From Bustle — Sign Up For The Newsletter