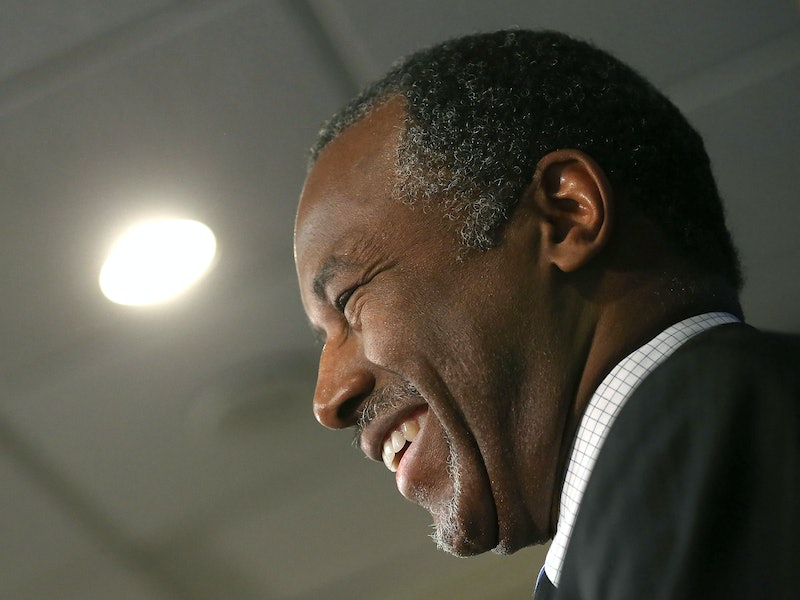 During Saturday's GOP debate in New Hampshire, Ben Carson channeled Ronald Reagan on his birthday, opting not to attack his fellow presidential candidates. When the ABC News moderators asked Carson to respond to the Cruz campaign telling voters during the Iowa caucuses that Carson was dropping out of the race, Carson said he would take Reagan's 11th commandment that "thou shalt not speak ill of any fellow Republican." Republicans always get bonus points for mentioning Reagan in a debate, and Carson knew that bringing up the 40th president of the United States on his birthday would go over very well.

Carson said: "This is the 105th birthday of Reagan. His 11th commandment was to not speak ill of another Republican. So, I'm not going to use this opportunity to savage the reputation of Senator Cruz." Despite seemingly taking the high road, Carson didn't exactly forgive Cruz for the mishap. The retired neurosurgeon went on to explain that the news outlet Cruz blamed for tweeting that Carson was going home after Iowa immediately tweeted a clarification, saying that voters could decide whether or not the Cruz campaign ignored the second tweet and acted shady. So, Carson technically followed Reagan's commandment, but found a loophole by insinuating criticisms of Cruz rather than saying them explicitly.

Carson also voiced his disappointment in how Cruz's campaign behaved, fully playing up his role as the victim and his commitment to his supporters.

I will say that I was very disappointed that members of his team thought so little of me that they thought that after having hundreds, if not thousands of volunteers and college students who sacrificed their time and were dedicated to the cause — one even died — to think that I would just walk away ten minutes before the caucus and say, "Forget about you guys."

Reagan might not have approved of Carson's debate tactic after all.