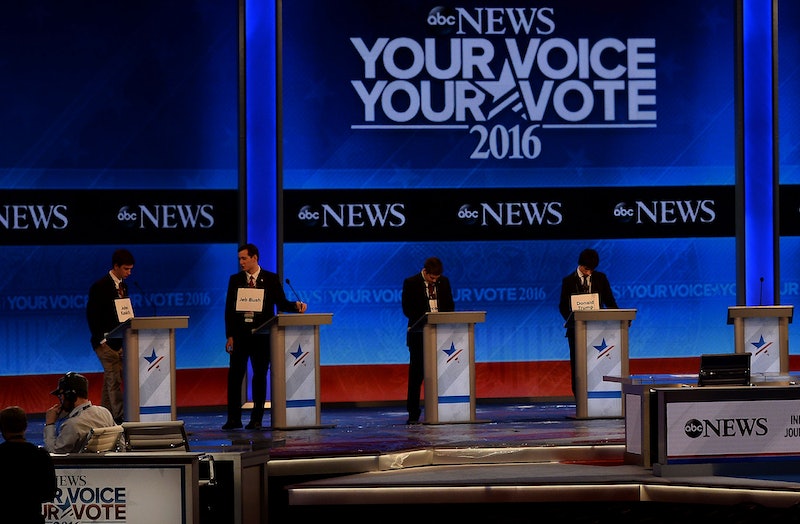 Talk about awkward first impressions. When moderators David Muir and Martha Raddatz welcomed each candidate on to the stage at the start of Saturday's GOP debate, something seemed slightly off. Retired neurosurgeon Ben Carson refused to walk out out to his podium, causing a back-up in the wings and a cringeworthy situation all around.

As is typical at these debates, the candidates took — or rather, were intended to take — the stage one-by-one, walking out to their podium, which was assigned based on their standing in the polls. At Saturday's ABC News debate in New Hampshire, the candidates were supposed to walk through a small hallway on the side of the stage and out to their podium, all on camera. When the moderators called Carson's name, he stepped into the hallway, but he did not proceed out to the main stage where the podiums were located.

At first, it seems like Carson was just confused about when he was supposed to move out on to the stage. The move caused an awkward silence among the moderators, until finally, they just continued calling the other candidates' names. Ted Cruz was next on the list — but even seeing Cruz walk into the hallway didn't send Carson on his way to the podium.

What ensued from that point forward was just painfully uncomfortable for all who were watching. Members of the production team peeked around the curtains to gesture that Carson should continue out on to the stage, but it was clear that he did not intend to move. Rather, he stayed firmly planted in front of a camera in the hallway leading out to the stage as his fellow candidates walked around him to their respective podiums.

When Donald Trump's name was called, Trump walked up to where Carson was standing and did not budge, either. In total Trump fashion, he was not to be outdone by Carson's antics. The pair remained there — awkward as it was — until it seemed like they thought everyone else had passed them. That's when things got even more uncomfortable.

Trump and Carson finally walked out to their podiums, and then the moderators announced that John Kasich was still waiting to be called. Kasich, who has not made nearly the same impact in the polls as Trump or Carson, seemed like an afterthought. What's interesting is that New Hampshire — even more so than Iowa — has been a core focus of Kasich's campaign. To be overshadowed by Carson's silly antics at the start of the debate probably wasn't in his game plan.

Ultimately, Saturday's GOP debate was bound to have an uncomfortable moment or two. After all, it's basically the last opportunity that the candidates have to make a lasting impression on the voters of New Hampshire before they head to the polls on Tuesday. It's also the first opportunity the candidates have to address a massive audience of voters since the results of the Iowa caucus were announced. Awkwardness was likely inevitable, but it's likely that no one could have expected it to come so early in the night.