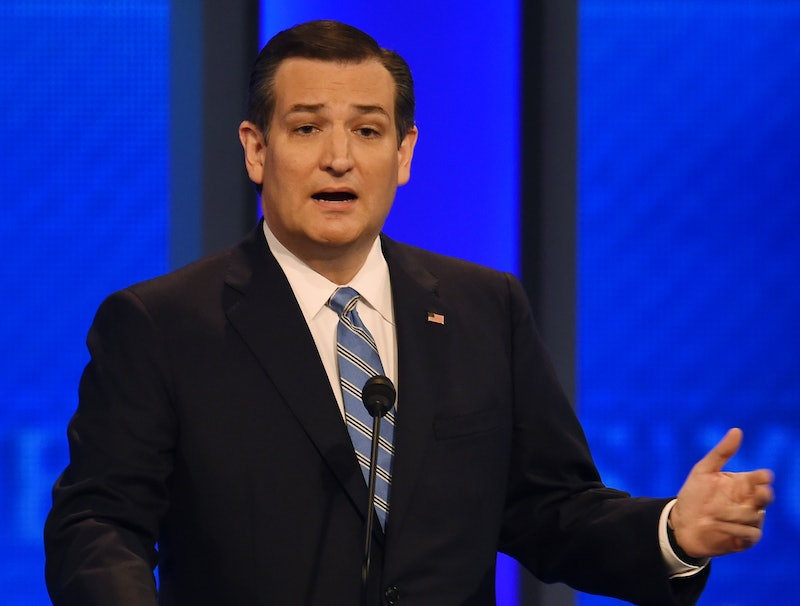 When asked about New Hampshire's heroin problem in Saturday night's GOP debate, Ted Cruz explained that the issues is very personal for him, as Cruz's sister died of a drug overdose. The Republican seeking the White House told the debate audience that his half sister, Miriam Cruz, went to jail several times, spent time in a crack house, and ultimately died of a drug overdose five or six years ago. "She was angry her whole life," he said.

Miriam, who was 12 years older than Ted, died in 2011 at the age of 49. Ted explained that his sister refused all help he tried to offer, saying: "She was not willing to change the path she was on." He used his personal story to advocate for more to be done to combat drug addiction in the U.S. "This is an absolute epidemic," he said. "We need leadership to solve it." The Texas senator went on to say that action needs to be taken on local and state levels, and the federal government needs to secure the borders to prevent drugs from entering the country. He didn't go into detail about what he thought local governments should do to prevent and treat drug addiction, but said: "As president, I will secure the border, we will end this deluge of drugs that is flowing over our southern border and that is killing Americans across this country."

Ted attempted to quiet concerns that he was only telling New Hampshire voters what they wanted to hear days before the state's primaries. New Hampshire has one of the highest rates of addiction per capita in the nation, with admittance rates for state-funded treatment programs for heroin up by 90 percent and 500 percent for prescription opiate abuse in the past decade. Because of the state's problem, addiction has become a major topic in the 2016 election, much more than it has in past elections.

Ted's very personal story about his sister was touching, and showed that he knows first-hand what addiction can do to a person and a family. However, his plan for dealing with the issue was very vague.

More like this
The David Beckham Qatar Controversy, Explained
By Sophie McEvoy
What Jen Shah's Delayed Sentencing Could Mean For The 'RHOSLC' Season 3 Reunion
By Brad Witter and Jake Viswanath
Matt Hancock Broke a Major Rule With I’m A Celeb
By El Hunt
Adele’s Boyfriend Was “Livid” Over This Fan Interaction At The Singer’s Show
By Sophie McEvoy
Get Even More From Bustle — Sign Up For The Newsletter