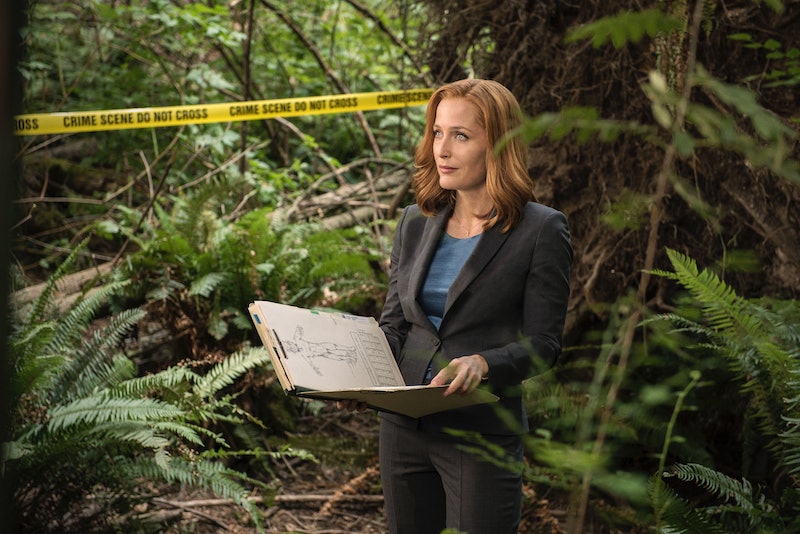 It felt like the revival had officially hit its stride when the Feb. 1 X-Files episode "Mulder and Scully Meet the Were-Monster" aired. The hilarious, deliberately campy "monster of the week" theme was better than ever as Mulder attempted to use his new camera app to obtain a video of the were-monster and engaged in an old-school rant that Scully described as nothing short of "batcrap crazy" — just the way she (and viewers) like him. The episode was filled with Easter eggs and winks to the show's devotees, including a tombstone for Kim Manners (a former director on the show), a reappearance of Mulder's red speedo, and numerous Moby Dick references. But, one of the most significant moments has revived a popular fan theory and topic of debate. When Mulder playfully chides Scully for approaching a dangerous suspect without backup not once but twice, she responds by telling him: "You forget, I'm immortal." Was it a joke or is Scully really immortal on The X-Files?

Well, since nothing can ever be straightforward on this show, it's unclear. Her immortality was first addressed in the Season 3 episode "Clyde Bruckman's Final Repose" when Mulder and Scully asked a psychic how they would die. According to Clyde Bruckman, Mulder will die of autoerotic asphyxiation (awkward) and Scully won't die at all. Fans love to debate both sides of the argument, and even X-Files insiders can't seem to agree on the issue. In a Reddit AMA, showrunner Chris Carter answered a fan question about whether or not Scully is immortal: "Yes, it said so right in the show." Meanwhile, Darin Morgan (who wrote both "Clyde Bruckman's Final Repose" and "Scully and Mulder Meet the Were-Monster"), recently told Entertainment Weekly that he thinks and hopes Scully is not immortal and the lines in both episodes were meant as jokes. I suppose it's somewhat comforting to know that even the writers and directors on The X-Files are as confused as the show's fans.

But, Carter has hinted that the possibility of Scully's immortality will be addressed in a more serious manner during the revival's finale. In January, he cryptically told The Huffington Post: "It's certainly been suggested, but I can tell you this: Stay tuned for Episode 6." Fans of The X-Files will definitely stay tuned — but while we wait, let's channel our inner FBI agents and explore some theories about Scully's immortality.

Although Bruckman predicted her immortality in Season 3, it didn't become official until the Season 6 episode "Tithonus." Before the 2002 series finale, Slate writer Josh Daniel assured X-Files fans that our beloved Scully would be safe in the finale because she's immortal. He theorized that the events of "Tithonus" are what ultimately made Scully's immortality canon. In that episode, she crossed paths with an 149-year-old photographer named Fellig who once "looked away" when death came for him and ultimately became immortal. When both Scully and Fellig are shot during this episode, he instructs her to "look away" from death the same way he once did. She does, and he dies — which implies that she has replaced Fellig as the immortal one.

Just four episodes after "Tithonus," Mulder and Scully find themselves caught in a Groundhog Day type time loop — the same Monday repeats over and over, and neither of them realize that they're re-living the same day. In this episode, Scully repeatedly attempts to stop a bank robbery and the bank blows up with her inside it on multiple occasions. It appears that the day continues to reset because the explosion would have killed Scully — and her immortality is what triggers the time loop. As Reddit user the_piranha points out, the day had to repeatedly reset until Scully was able to walk out of the bank alive — and only then was time allowed to move forward.

Theory #3 — Her Immortality Will Allow Her To Save Humanity

Since Carter specifically told fans to stay tuned for Episode 6 (the revival's finale), perhaps her immortality will be key to saving humanity. Here's the episode description from FOX's official website:

The investigations that Mulder and Scully previously began with conspiracy theorist and web-TV show host Tad O’Malley (guest star Joel McHale) seem to have awakened powerful enemies. A widespread panic begins as people all over the country suddenly start falling gravely ill, and Scully must look within to try and find a cure.

Since this is a mythology-based episode, it makes sense that Scully's immortality will come into play — and perhaps it will provide her with the opportunity to save the day and save humanity because she has the ability to successfully carry out a mission that could only be accomplished by an immortal individual. Although I'm on the fence about Scully's immortality, I'd love to see the revival end with her as the ultimate savior — because she's more than earned the title of "hero" and she deserves major credit.

The initial reference to Scully's immortality was, as Morgan says, nothing more than a joke that unintentionally sparked a series of intense theories from the show's obsessive fans. (We just can't help ourselves.) As we theorize, I can almost hear Scully's skeptical sighing from here. She would be quick to explain to us that science proves immortality doesn't exist and we're "batcrap crazy" for suggesting it.

Either way, X-Files fans can't wait to see what the revival's finale reveals about Scully's immortality or lack thereof.