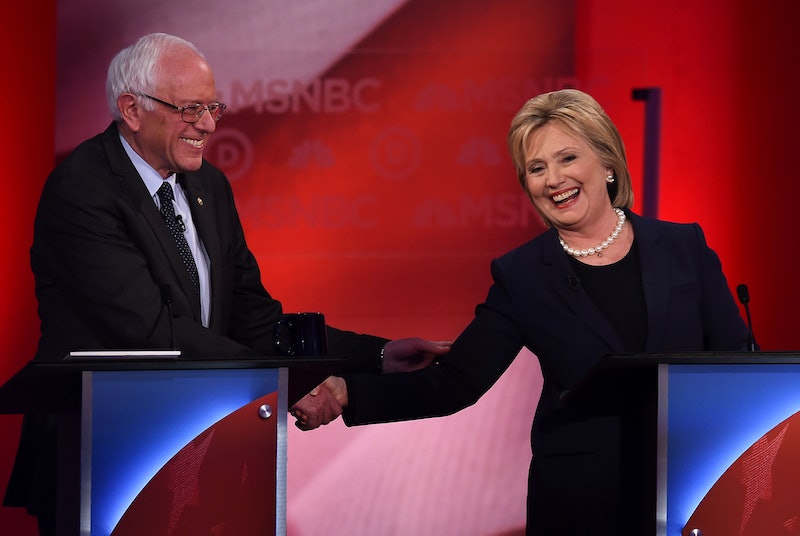 You didn't think they'd let a week go by without a debate, did you? On Thursday, Democratic candidates for president Hillary Clinton and Bernie Sanders will face off for a sixth time in Milwaukee, Wisconsin. You might actually want to know how to stream the PBS Democratic debate, though, because it could be the biggest night yet for the Democratic side of the race.

Clinton and Sanders will go head-to-head at the University of Wisconsin-Milwaukee as PBS NewsHour co-anchors Gwen Ifill and Judy Woodruff moderate. The debate will be broadcast on PBS's member stations, which total more than 350 stations across the country. CNN will also broadcast the debate, which could increase the debate's audience significantly, as cable has done throughout the debate schedule.

Both PBS and CNN will also stream the debate online. As with previous debates, you won't need a cable account to stream the debate on CNN's website. As a public broadcasting network, PBS doesn't require a cable account to view any of its online content. If you prefer to watch via a mobile device, Apple TV, or another similar platform, the live stream should be available through CNN's app. Even if you haven't watched PBS since elementary school, you should consider tuning in on Thursday, as the stakes get higher for the candidates and the all-female moderating team is likely to shake things up.

Thursday's debate will come as debate viewership, at least on the Democratic side, seems to be waning. Last Thursday, Clinton and Sanders met up for a last-minute debate ahead of the New Hampshire primary. That debate, which was broadcast by MSNBC and streamed online, was the lowest-rated debate of the entire election cycle, according to audience numbers. An average of just 4.5 million people were tuned in. That's an even smaller audience than MSNBC usually receives during that time slot, meaning the debate caused even fewer people than normal to watch MSNBC while it was on.

Previously, low ratings for the Democratic debates have been at least partially blamed on the time slots they've gotten. Many of the Democratic debates have been scheduled for weekend nights, which traditionally receive smaller audiences than weeknights. Last week's debate was during the week, but it was scheduled at the last minute, so perhaps that had something to do with the small audience.

Thursday's debate in Milwaukee has been scheduled for months, and it's on a weeknight, so expectations for viewership will likely be high. The Iowa caucus and New Hampshire primary are out of the way, but the vast majority of the country still awaits its primary elections, meaning that voters could still be deciding whom to support. For this reason, voters should plan to tune in on Thursday, whether it's via a television or the web.