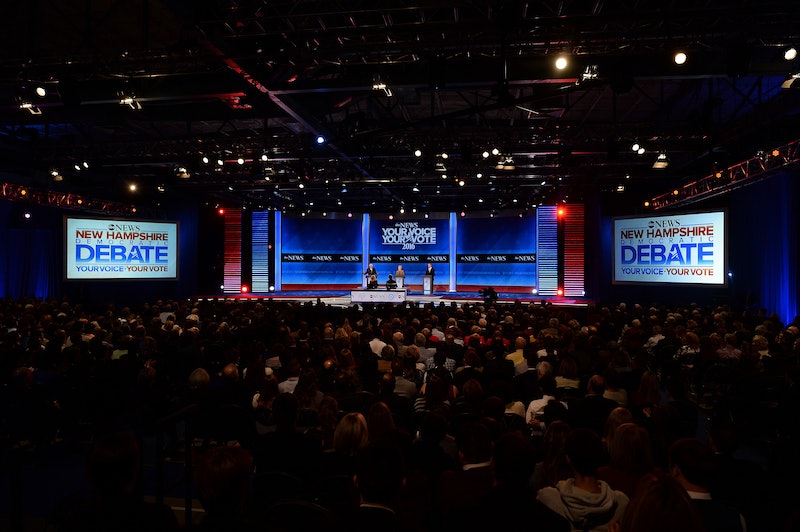 On Saturday night, the Democratic Party took its starring turn on the national debate stage, in the crucial early primary state of New Hampshire. But the particular timing of the event — the third one out of six the Democrats will hold during the 2016 primaries — has gotten a lot of people wondering: Why are there Democratic debates on Saturdays and Sundays? The question is understandable, considering that you'd typically expect a political party to want maximum exposure for its candidates. Scheduling debates on weekend nights, so the logic goes, almost assures less exposure.

And yet, when you look at the Democratic debate schedule, it's pretty noticeable: While three of the debates are airing on weekday nights, the other three are scheduled on those not-terribly-desirable weekend slots. The Nov. 14 debate was on a Saturday night, and on Jan. 17, we'll have a Sunday night debate airing on NBC News. Some supporters of the Sanders and O'Malley campaigns have accused the Democratic National Committee of deliberately scheduling debates at low-viewership times, so to shield the obvious front-runner Hillary Clinton from overexposure.

So, what gives? According to DNC spokesperson TJ Helmstetter, who provided comment to Bustle through Twitter, there's actually a not-so-mysterious reason for it — he said that the major broadcast networks wanted Saturday debates, while cable news channels carrying debates wanted weeknights. He also said the same thing was true for the GOP debates, and indeed, the schedules back this up — the only two weekend debates on the Republican side are the ones airing on ABC and CBS, while the cable news ones are all on the weekdays.