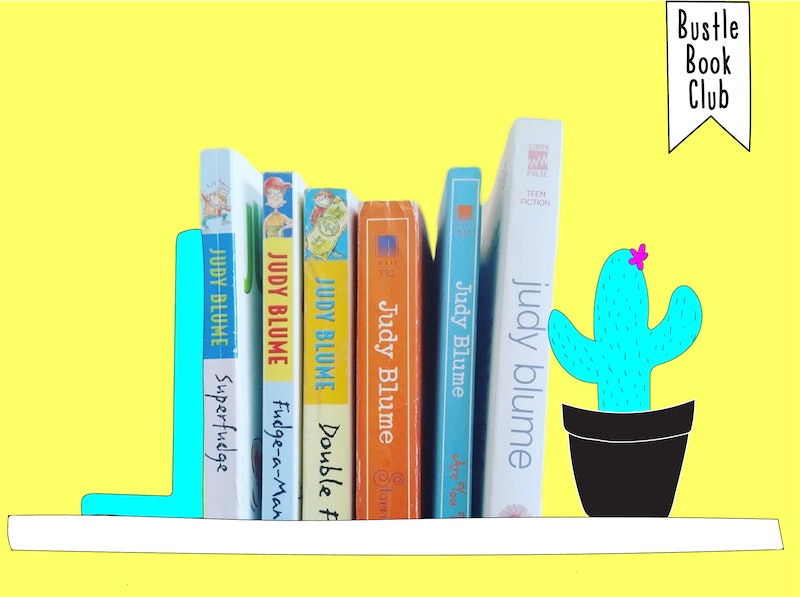 I grew up chain reading Judy Blume books — turning the final page in Tiger Eyes, and starting up Deenie, then Are You There God? It's Me, Margaret, then Just as Long as We're Together and its sequel Here's To You, Rachel Robinson. Before I hit my pre-teen years, I was devouring Freckle Juice, Tales of a Fourth Grade Nothing, and The Pain and the Great One. And when I finally stumbled across her adult fiction novel Summer Sisters (probably way before I was supposed to, by the way), I decided it was so life-changing that I was never going to stop reading it. And summer after summer, I pick it up and read about Vix and Caitlin on Martha's Vineyard so that now the pages are worn and stained and grains of sand occasionally slip out from the binding.

I know my history with Judy Blume is not singular. She has inspired generations of reader (and writers) with her relatable characters, her frank discussions of the difficult topics of growing up, and, as you notice particularly when you're older, her feminism that weaves through all of her stories.

Way before her time, Judy Blume was bringing women's sexuality, agency, and voices to the forefront, and she wasn't afraid to do so even in the face of book banners determined to keep it quiet. Though you could find countless examples, here are 10 of the most standout feminist moments in Judy Blume books.

If you are no longer a virgin, remember the first person you had sex with? Are you currently married to him or her? (Sorry to incite horror among some of you.) Though, of course, there are exceptions, chances are you are not. Because no, sex does not have to mean forever love, and it often doesn't, and Judy Blume was the first person to tell me that. (Blame abstinence-only education.)

Michael and Kath fall in love and have sex for the first time, and shockingly don't get pregnant, get STDs, or have any tragic complications. They also don't, however, stay together.

Women are so often taught to "save themselves" (creepy!) for the person they marry. And if you decide that path is for you, great. But if you don't, Aunt Judy is here to tell you that's OK, too. While books aimed at teenagers were wrapping up sex with the term forever, Blume used her book Forever to show that there's nothing wrong with moving on from the person you lost your virginity to. Even more? Sometimes it's even healthier. It was revolutionary and feminist, and even in today's modern lit, it's still not nearly as common as everlasting, forever love.

2. The Slut-Shaming Takedown in Are You There God? It's Me, Margaret

When Margaret first spotted Laura Danker, she thought she was the teacher because Laura was further developed than all the other girls in their class. And because Laura already wears a bra and has gotten her period, the entire class spreads rumors that she is sexually active (behind the A&P, if we want to get specific).

Soon, however, Margaret confronts Laura about the rumors, and she learns that it's just lies spread by mean girl Nancy. When Margaret learns this lesson, all us pre-teen readers learn the same one, one it feels society is still learning today: A woman's appearance, whether it's what she's wearing or her body type, is in no way correlated to her sexual history or experience.

3. The OTHER Slut-Shaming Takedown in Forever

“Sybil Davison has a genius I.Q. and has been laid by at least six different guys.”

In that one simple statement, Judy Blume absolutely obliterates the negative stereotypes of sexually active women.

4. Sally's Acting Choices in Starring Sally J. Freedman as Herself

Starring Sally J. Freedman As Herself was first published in 1977, but it's set in 1947. Our titular Sally is a Jewish grade schooler, and she dreams of becoming a movie star. But instead of the damsel in distress, Sally would far rather play a spy, confronting Hitler, who was responsible for her cousin and grandmother's sister's deaths in Auschwitz. Even in the '40s, she can see herself as the star of the show, and she doesn't believe she has to be relegated to the main (male) star's love interest. If only we had Sally for some of the blockbuster movies today.

Summer Sisters is my absolute favorite re-read book, one that's always around to comfort me. (Though OK, maybe I first picked it up because one of the main character's name is Caitlin.) And sure there's Bru, Von, and Gus, but at the story's heart is Vix and Caitlin. This feminist moment isn't exactly a moment, but it's the concept of the book itself.

Summer Sisters is the ultimate love story, but that doesn't mean it has to be romantic love. Friendship between two female best friends can be the most influential, powerful, life-changing relationship of a lifetime — forget boyfriends and husbands.

I have this special place and when I rub it I get a very nice feeling. I don't know what it's called or if anyone else has it but when I have trouble falling asleep, touching my special place helps a lot.

Guess what? Sexual contact, with yourself or with a partner, can be enjoyable for women. Deenie discovering what Blume called her "special place" to "get that good feeling" was revolutionary (just ask the book banners).

When Forever was published in 1975, everyone freaked out that teenage, sexually active Kath (gasp!) was on birth control. If only Judy Blume knew that we'd still be having this debate about women's access to birth control 40 years later in 2016.

8. Learning That Girls Should Stick Together in Otherwise Known as Sheila the Great

If there's one scene in Judy Blume books that has really stuck with me it's the infamous slam book scene in Otherwise Known as Sheila the Great. At a sleepover party the girls write in the slam book what they think of the other girls at the party. Sheila learns, among other things, that one of the girls thinks her face is "ugly but lovable." Naturally, things get out of hand.

Judy Blume comes down firmly on the side of girls sticking together. The scene is such a knock against women cutting each other down, against bullying. Considering that decades later, Tina Fey has to make that point again with Mean Girls' Burn Book, it just shows how ahead of the feminist times Blume was.

I know: Another feminist moment from Forever? There's a reason the book is iconic YA. This moment is subtle, but it's so important. Before there was Michael, and before she lost her virginity. Kath dated Tommy Aronson, who threatened to leave her if she didn't have sex with him. But Judy gave Kath agency, and she didn't let her have to settle for that crap. Kath turned on her heels and left that jerk Tommy. Girl power.

The words you use when you talk about women are meaningful — whether you're talking about their behavior, their body type, their clothing or anything. In an age when Twitter harassment against women is shockingly the norm, though it still isn't isn't taken seriously, we can all look to the grade school class bullying "Blubber" for her body type and realize that Judy knew how serious words were all along.

More like this
Candice Brathwaite Is Over Using Her Own Life For Material
By Shahed Ezaydi
10 Must-Read New Books Out This Week
By K.W. Colyard
The Most Anticipated Books Of August 2022
By K.W. Colyard
The 35 Best Thriller Novels To Read Now
By Morgan Leigh Davies
Get Even More From Bustle — Sign Up For The Newsletter