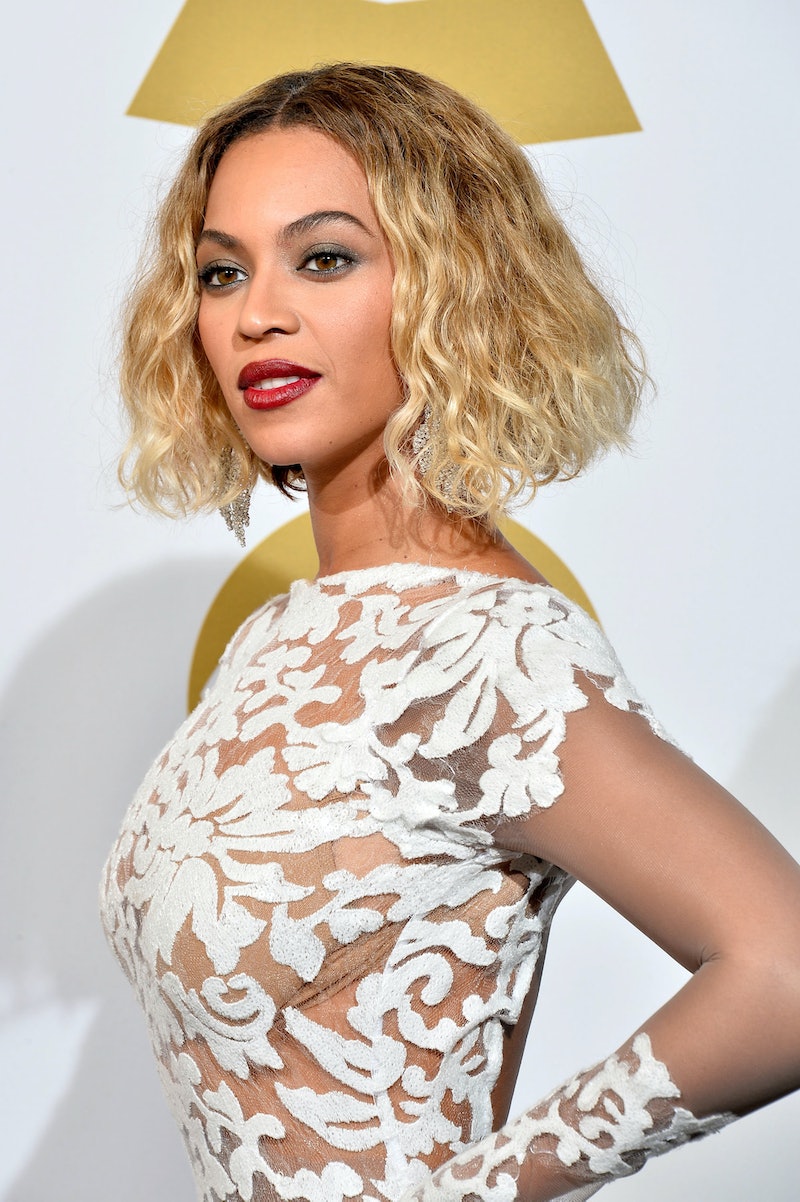 Finally, the world has given us a reason to bother going to to New Jersey. PhD student Kevin Allred of Rutgers University has created a class, "Politicizing Beyoncé." As in, yes, somewhere in this glorious world, there are lucky students who get to spend their class time purposely learning about King Bey (unlike the rest of us, who are still stuck clandestinely grooving to "Drunk In Love" when our teachers aren't looking).

The course as it exists uses Beyoncé and her career as a lens "to explore American race, gender, and sexual politics" with a reading list full of amazing black feminists and abolitionists like Sojourner Truth. Sounds amazing, fascinating, and powerful — fitting, considering those are all adjectives we use to describe Beyoncé herself. (In fact, just learning about the class, we're wondering: How much would it cost to enroll in Rutgers right now?) But may we suggest an accompanying course, one that would also focus on the pop legacy of King Bey, the hero worship surrounding the diva, and, of course, those amazing Destiny's Child mix-and-match outfits?

In the wider context of cultural importance, we all have PhD's in Beyoncé, and these sections are how we'd organize our masterclass. Take note students: Classes are held Monday and Wednesday of every week from 3 to 5 p.m., and absence will not be tolerated. It's our shit, bow down bitches.

Objectives: In this course we will explore the many faces of Beyoncé, from Sasha Fierce to the Bonnie to Jay Z's Clyde to Queen Bey. Over the course of her career, Beyoncé has worn many masks, from a girl group member to sex symbol to mother and back again, all of which are deserving of close analysis and group discussion. Our aim in this class will be to praise her constantly, analyze her every move always, and do our best to put ourselves into the unique mindset of Queen Beyoncé. It won't be easy, as her work is a combination of hard physical work, incredible strength of spirit, and general beauty, but through secondary texts, consideration of all Beyoncé-related media and general hero worship, we will gain further understanding into the general goings on of the reigning monarch of pop music.

1) Every Beyonce Music Video Ever Made

Section 1: Who Is Sasha Fierce?

During Weeks 3-6, we will be combing through the Beyoncé discography, identifying each song we think could be attributed to her alter ego and quantifying why that might be. Students will then be asked to come in with those adorable belly-baring silk jackets she made fashionable in her "Crazy In Love" video (or, of course, a House of Deréon original). Secondary reading on the importance of multiple personality disorder in right-brained people will be advantageous in the third and fourth lectures.

You will be asked to write a 3,000-word persuasive essay on what might have influenced Beyoncé to name her daughter Blue Ivy, based on the lyrics to songs found on her first two solo albums, Crazy In Love and B'Day. Any references to Jay Z or his ability to contribute to decisions that impact both of them will be met with disdain and in all likelihood, points off.

It goes without saying that Beyoncé's public image has undergone a rather severe change, following the publicizing of her relationship and consequent marriage to rap superstar Jay Z. We will spending Weeks 7 through 9 after Private Beyoncé Appreciation Week looking critically at Beyonce's career pre-Jay and post-Jay, looking to chart specific differences in her public image. We'll also be imagining all the fun stuff they do when they go on those magnificent vacations on yachts. There will be an in-class quiz on where and when their vacations have been, discussion of whether or not Blue Ivy was conceived on one of the aforementioned vacations will be encouraged.

Until the end of the semester we will be focusing on the most controversial type of Beyoncé listener, the Bey Hater. As any academic study of Beyoncé's fierceness demands, we must consider the points made by those of the opinion that Beyonce is less than the absolute queen of music and beauty and life. She does insist on drinking alkaline water, whatever the hell that is, and she does have that thing about white furniture in her dressing room, so it seems pertinent to admit that what makes Beyoncé a perfect pop star probably makes her a perfect-ly crazy person offstage. However, we will end each class with a dance party to "Partition," just to get our spirits up.

Final Exam: The final exam will be a three-hour long written test. The first section will be short answer, featuring "WWBD" questions, those being What Would Beyoncé Do. The second section will be essay questions. Students will have a choice of three essay topics, all based on relating Beyoncé's Grammy performance with religious experiences as detailed in any and all Testaments.

More like this
The 2023 Grammy Nominations List Is Full Of Surprises
By Jake Viswanath
How To Stream 'She Said' In The UK
By Maxine Harrison
Where Is John Leonard Now After Suing Pepsi For A Harrier Jet?
By Brad Witter
James Colthurst Described His Last Call With Princess Diana Before Her Death
By Brad Witter
Get Even More From Bustle — Sign Up For The Newsletter