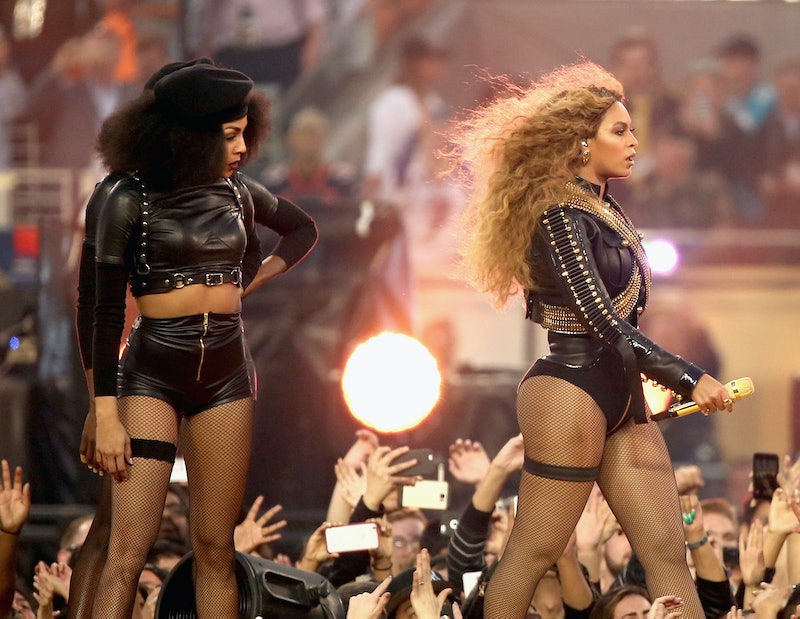 Listen y'all: Beyoncé's Super Bowl performance was fierce, and all the Twitter haters need to calm down. When she took the stage to perform "Formation" alongside Bruno Mars and Coldplay, the last thing she was inviting people to talk about her body. On Sunday night, Twitter was filled with negative comments about Beyoncé's body, and it's absolutely ridiculous. The fact that Twitter users have anything to say about her body is uncalled for, so let's stick to how #flawless her performance was, OK? OK.

Prior to her Super Bowl 50 performance, there was talk that Beyonce might announce her second pregnancy during the show, just like she did at the Video Music Awards with Blue Ivy. That was clearly not the case when she stepped out in a skin-tight Michael Jackson-inspired bodysuit and danced around the field. You'd think that would be the end of all the body talk, but apparently Twitter wasn't done.

People had an opinion on everything from her go-to body suits to her weight, with searches for "Beyonce fat" on Twitter leading to some seriously eye-roll-worthy results. But it's truly time to stop all the hating. If there's anyone that's preached self-love and body positivity, it's Beyonce, so it's time to stop with all the negative body talk. She look fierce and confident on stage and wore what made her feel great. So take that, Twitter trolls.

These types of reactions are exactly why we need to be talking more about body positivity. What does Beyoncé's current weight have to do with the quality of her performance? And aren't all those haters kind of missing the entire point of Beyoncé's new single? The fact that anyone is talking about a fierce, successful woman's body only a day after she released an important music video about empowering other women is seriously upsetting, and reeks of antiquated sexism.

Chances are, though, that Beyoncé isn't worried about the haters. She's just gonna continue to slay.