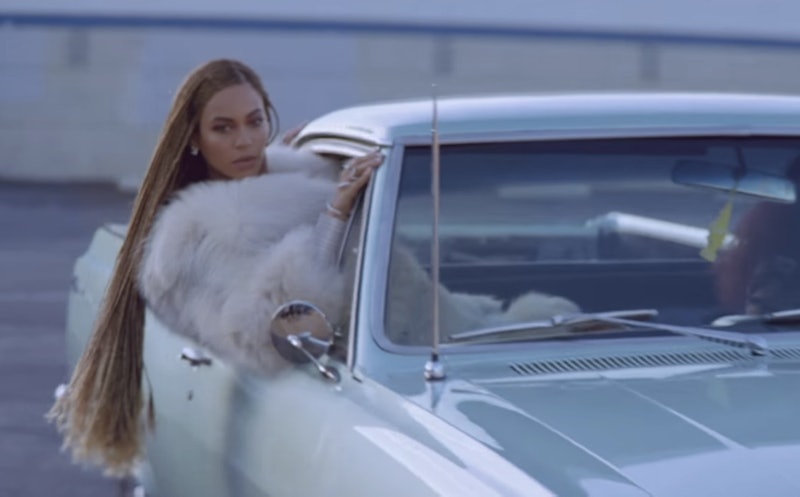 If you thought Super Bowl 50 was going to be the big news this weekend, then you obviously don't know Beyoncé. In a surprise move, Beyoncé debuted a new song "Formation," as well as a politically-charged music video. What is Beyoncé's "Formation" about, though? The video presents some serious social commentary, and the lyrics to "Formation" seem highly personal for Beyoncé.

Based off the lyrics, the song is all about who Queen Bey is deep down. Every carefully chosen word applies to her heritage, her family, and what her fame means to her — even her sweet daughter Blue Ivy appears in the video, adding a powerful, multi-generational touch. Beyoncé is doing more than talking about slaying here — she is explaining to us all how she does it with lyrics that cut deep. This is a side of Beyoncé you haven't seen before, but will definitely want to see again.

While Beyoncé has always loaded her music with a sense of female empowerment, it tends to be in a more general sense. Here, Beyoncé is the one who is empowered, she's the one who is owning her cultural identity, and she is the one who doesn't care if you don't like it. "Ya'll haters corny with that Illuminati mess/ Paparazzi catch my fly, and my cocky fresh," she sings during the refrain. It is a proverbial middle finger (to go along with the literal ones she throws up in the video) to the people who dismiss her success, and the paparazzi's insatiable need to follow Beyoncé and her family at all times. She even proudly admits to being possessive of her husband, Jay Z: "I'm so possessive, so I rock his Roc necklaces."

"Formation" isn't just about Beyoncé's present though — it's also about where she comes from and how her heritage has informed the inspiring woman she is today. "My daddy Alabama, Momma Louisiana," she proudly proclaims. "Earned all his money but they never take the country out me."

Beyoncé is proud of being from the South, and she acknowledges through both the lyrics and the visual imagery that invoke Hurricane Katrina and the Black Lives Matter movement that the area is volatile when it comes to matters of equality. Her strength, her perseverance, and her talent all manifested itself in the south — Houston, Texas, to be exact — and she is not going to forget where she, or her family came from.

Bey is also trying to get across through the song that she has worked crazy hard to get to the top, and now that she's there, she isn't going to let anyone bring her down. The songs constant refrain of "I slay, OK, I slay," is not just a self-referential nod to her fans, it's a way of saying there is a reason she slays. It's not effortless. Beyoncé has built her career from the ground up and she deserves respect for all that she has accomplished. "Always stay gracious, best revenge is your paper," Beyoncé sings at the close of the song. In other words, she's not going to let any haters take her down. She has the talent, fans, and money to back up her fame — she doesn't need universal approval because she knows how amazing she is.

An important social message and a personal one? Now that is how you slay.

More like this
Taylor Swift, Kerry Washington & More Speak Out On Uvalde Mass Shooting
By Jake Viswanath
Harry Styles Opened Up About Olivia Wilde With A Rare Comment About "Trust"
By Sophie McEvoy
Twitter Has Very Mixed Feelings About The New 'American Idol' Winner
By Jake Viswanath
Selena Gomez Joked About Her Relationship Status In Her ‘SNL’ Monologue
By Grace Wehniainen
Get Even More From Bustle — Sign Up For The Newsletter