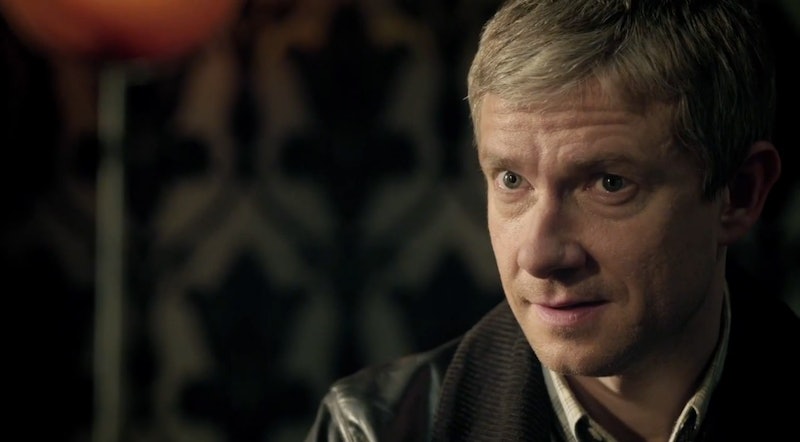 The thing about Sherlock is that it's so sweet when it's here, but it's not here for that long — in fact it's three episodes per season to be exact, which means the Season 3 finale is upon us. Maybe this clip from Sherlock 's "His Last Vow" will soothe your ravaged soul.

The sneak peak shows us a scene from the finale in which Sherlock introduces John to his girlfriend. And yes, Sherlock has a girlfriend, and it's that woman he met at John's wedding the episode before. John is, to say the least, surprised to see his best (usually celibate) friend shacked up with a lady.

The video has "MASTERPIECE" in its title purely because it's part of PBS' Masterpiece programming, but it is in fact a masterpiece all its own, what with it being further proof that Martin Freeman's face is a thing of wonder, especially when he is acting as one Dr. John Watson.

There is also, in a bit that is a bit more impactful to the actual plot of the episode, a bit from Sherlock expounding on "His Last Vow"s big villain, one Charles Augustus Magnussen. That part's important, too.

And so witness: John Watson's confusion acrobatics, and a glimpse at the chillingly villainous Magnussen.