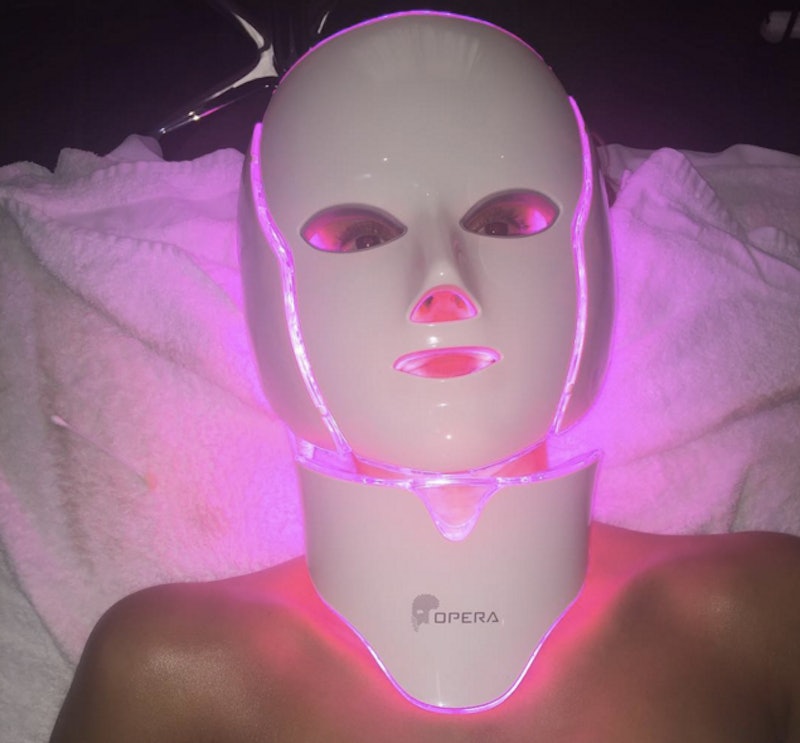 One of the K-beauty trends to watch in 2016, according to Harper's Bazaar, is at-home LED skincare devices. At this point, LED light therapy is still a relatively niche skincare technique in the United States, most often found in estheticians' or dermatologists' offices and medical spas. But it's a fairly common skincare treatment for Korean women, where there seems to be an esthetician on every corner and innovative skincare methods abound. LED skincare therapy can be used to fight acne or boost collagen production, depending on what color light is used. "A lot of these machines are actually in the form of a mask," explains Angela Kim, founder and CEO of Insider Beauty, in a phone interview. Though it sounds super-futuristic, all you do is pop the device on your face, sit there for a while, and let the light do its thing.

So enter the at-home LED skincare device, similar to the light therapy treatment you might get from your local esthetician, but in the privacy and comfort of your own home. On the surface, it seems like a pretty good deal, but there are some very real challenges to making these high-tech beauty products go mainstream.

What exactly are the benefits of using an at-home LED light therapy systems? Are they really worth the hype and the cash? Here are the pros and cons to investing in one of these devices.

How Do They Work?

Each of these devices emits a different wavelength of light, differentiated by color, and each color does something slightly different to your skin. "Blue lights are targeted for acne-prone skin. The red light is helpful for collagen production," which can be thought of as an anti-aging treatment, explains Kim of Insider Beauty.

Use of the mask is fairly straightforward: Slap it on your face, turn on the light, and sit there for anywhere between 15 and 30 minutes, depending on the device. The handheld treatment can be a little tricker and time-consuming, as the user has to hold the LED lights to the different parts of their face, but according to Cindy Kim, a Korean skincare consultant, you can also find big LED panels that rest on a table. "The panel spreads the LED a lot further on your skin at one time so your'e not having to hold the thing up to your cheek in ten different places," she tells me on the phone.

Plenty of celebrities swear by these LED devices, and that's definitely played into the hype in the United States. One of the most regularly name-dropped is the Deesee Skin Care System, a Korean-designed device that looks like a mask and is a favorite of makeup artist Gucci Westman and Linda Evangelista. Jessica Alba somewhat famously posted a space age-inspired selfie with the Deesee System on Instagram. And Kim Kardashian prefers the Quasar MD Plus, which she mentioned in her interview with Into The Gloss.

Though products like Deesee Skin Care System might look a little reminiscent of a Stormtrooper's mask, the relatively small size is what's getting everyone so excited about the potential for this new generation of at-home LED therapy. "They were much bigger machines that you would only be able to try if you visited some esthetician's office," Angela Kim tells me in a phone interview. "But now, as these devices are getting a lot smaller and a lot more portable, it's just going to be a lot more accessible."

That investment of time is one of the major barriers to entry. As Cindy Kim says, "You have to use this device for 15 minutes, plus. In the grand scheme of things, it doesn't seem like a lot of time, but when you have to do it every day? You might be excited about it for a month or two, and you're really doing it, but then it falls to the wayside."

"There's a lot of education required around the technology and why it works and how to use it and how to comply," Alicia Yoon, CEO of Peach & Lily, agrees. "And they're not items that are $20, so there's a bit of a hurdle for consumers where they really need to believe that this is going to work." And the high price point is definitely the biggest drawback of these devices. The Quasar MD Plus will run you a cool $595 from the manufacturer while the Deesee Skincare System is closer to $3,000. They're not cheap, and it can be hard to convince anyone to spend that kind of cash on an at-home skincare treatment that is, at this point, so unfamiliar.

If you are going to drop several grand, or even just a couple of hundred, on a brand new skincare device, you probably want to be sure the technology works; and right now, the jury's still out. "The outcomes with prospective, randomized scientific studies are mixed," Dr. Stafford Broumand, a NYC-based plastic surgeon who offers LED light therapy at his practice, tells me on the phone. What that means in a practical sense, he notes, is that some patients see a difference in their skin while others don't see any change. But since the risks are fairly limited, there's no real harm in giving LED light therapy a shot. "We've seen no adverse effects in our practice. It doesn't burn." As a result, Dr. Broumand usually recommends using the LED light therapy in conjunction with other treatments, like lasers or injections, depending on what kind of result the patient is looking to achieve.

Yoon echoes this sentiment, especially when it comes to at-home LED devices. "It's just another option to supplement with all your products and being able to take your skincare to another level."

Will LED Skincare Devices Be The Next Big Thing?

Since the price is so high and the results of LED therapy alone are still relatively mixed, it's going to take more for these devices to really take off. Cindy Kim thinks that means the rise of multifunctional tools. "If I'm going to hold up an LED to my face, I hope it's doing something else too," she jokes. And she thinks some of the added functionalities — like vibration to help with absorption of accompanying creams or serums, or different modes to help with lifting — make these devices, while still expensive, worth the money in the long-term.

"Price is definitely an issue," admits Kim. "But with things like Foreo and Clarisonic, women are adapting to using devices a little more." Kim of Insider Beauty agrees. "I think that with machines, as people are able to try these products out and test them and see how effective they are, they're definitely going to become a lot more popular," she says.

The hope is that these devices, as they continue to grow in popularity, will also drop significantly in price, especially as some of the innovative devices already used in Korea make their way over to the United States. But until then, it might not be the worst thing to wait or go see your dermatologist instead.

Want more beauty tips? Check out the video below, and be sure to subscribe to Bustle's YouTube page for more inspo!