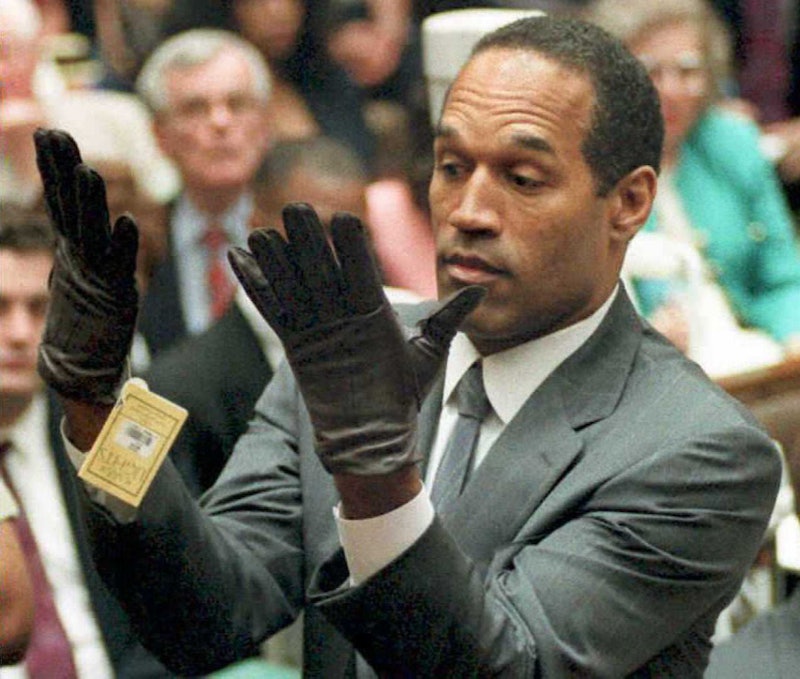 On FX's newest anthology series, we have already been witness to the discovery of a murder, its ensuing investigation, the introduction of legal teams on both sides of the case, a funeral, the warrant for the arrest of a suspect, and the subsequent flight of that suspect… and that's all just in the first episode! There are still nine episodes to go in The People v. O.J. Simpson: American Crime Story and things are only going to get even more complicated from here. Some viewers will likely remember the infamous trial like it was yesterday; others, whether they were too young or whether details have simply faded with the passage of time, likely need a refresher on all the ins and outs of the convoluted case. So here's your brief timeline of the O.J. Simpson trial.

Before the trial, Simpson was most famous as a former pro footballer-turned-actor, whose face was known nationwide thanks to his Hertz commercials as well as appearances in popular films like The Towering Inferno and The Naked Gun. In fact, shortly before his arrest, Simpson had filmed the pilot of a new NBC series titled Frogmen , which starred the football player as the leader of an A-Team-esque group of former Navy Seals. However, Frogmen would never see the light of day and Simpson's life would change forever on June 13, 1994.

At 12:10 in the morning on this fateful Monday, the bodies of Nicole Brown Simpson and Ronald Goldman were found stabbed to death outside her home in Brentwood, California, as reported by the Los Angeles Times. Brown Simpson, 35 years old at the time, was O.J.'s ex-wife and the mother of their two children, Sydney and Justin. Goldman, 25, was a waiter at a nearby restaurant who was allegedly returning Brown Simpson's mother's glasses at the time of the murders. They had both been killed several hours before their discovery, sometime during the night on June 12.

As reported by the New York Times, a warrant for Simpson's arrest was issued on June 17 once investigators had tested blood from the crime scene. When he failed to make his 11 a.m. deadline for turning himself in, Simpson led police on a highly publicized chase for hours, before finally being apprehended at his home around 8 p.m.

On this date, Simpson was officially arraigned for the murders of Brown Simpson and Goldman. He pleaded "not guilty" on both counts and was ordered to be held in prison without bail for the duration of the trial, as reported by the New York Times.

The Trial of the Century officially begins. The trial, presided over by Judge Lance Ito, occurred in Downtown Los Angeles, where the charges were filed, rather than Santa Monica. Many believe this was crucial to the outcome of the trial and that because the LA jury pool was notably more diverse than that of Santa Monica, jurors were more likely to be sympathetic towards Simpson .

Denise Brown takes the stand. Nicole's older sister claimed to the jury that Simpson had been abusive towards his wife on numerous occasions, as reported by the New York Times. She told stories about how Simpson had, during one argument, thrown Nicole against the wall and then tossed her out of the house. Denise also testified that once while out in public, Simpson had grabbed Nicole's crotch and said, "This belongs to me." Prior to the murder trial, Simpson had pleaded no contest to spousal abuse following a dispute with Nicole, as reported by the New York Times. However during his 1996 civil trial, Simpson denied beating Nicole.

Kato Kaelin was a key witness in the Simpson case, as he was staying in the defendant's guest house on the night of the murders and therefore could have conceivably accounted for Simpson's whereabouts. However, he proved difficult to question in court, cracking jokes and making the jury laugh. Lead prosecutor Marcia Clark petitioned Judge Ito to brand Kaelin a "hostile witness," a request he granted on this date, as reported by the New York Times, which also explains that a "hostile witness" means a lawyer is permitted to ask the witness leading questions that are generally otherwise prohibited.

This date signaled a huge turning point for the trial. At the request of the prosecution, Simpson tried on a pair of bloody gloves in full few of the jury, the judge, the press, and the courtroom. They didn't fit. Explaining why the prosecution went ahead with such a gutsy demonstration when they weren't 100 percent certain of its outcome, co-prosecutor Christopher Darden simply said, "I looked at his hands and I looked at the gloves and I thought they would fit," according to AOL. This allowed defense lawyer Johnnie Cochran to coin the phrase, "If it doesn't fit, you must acquit," which became the catchphrase of the trial. In 2012, Darden would publicly accuse Cochran of tampering with the gloves, an accusation Cochran couldn't address, since he had passed away from a brain tumor in 2005.

The prosecution had based much of their case on the testimony of Detective Mark Fuhrman, who had discovered the blood and the gloves — so it was severely damaging to them when the defense was able to attack Fuhrman's character by accusing him of being racist. They unearthed tapes of the detective, in which he used the N word 41 times. On this date, those incriminating tapes were played for the jury, possibly swaying their opinion on Fuhrman and thus his reliability as a witness against an African-American suspect. When he was on the stand, Fuhrman denied that he is racist.

Over eight months after the trial began, O.J. Simpson was found not guilty of the murders of Nicole Brown Simpson and Ronald Goldman. The jury took only four hours to deliberate.

After Simpson was acquitted on criminal charges, Ronald Goldman's family took him to civil court on a wrongful death suit. On this date, the jury found Simpson unanimously liable for the wrongful deaths and batteries of Brown Simpson and Goldman, and demanded that he pay their families a total of $33.5 million in punitive damages, as reported by the New York Times.

Exactly 13 years to the day since the announcement of his "not guilty" verdict, Simpson was found guilty of 12 unrelated counts, including armed robbery and kidnapping, after he and a group of men allegedly broke into a Las Vegas hotel and stole various sports memorabilia at gunpoint in September of 2007, according to CNN. He was sentenced to 33 years in prison with the possibility of parole in 2017. Last year, Simpson made an appeal requesting a new trial, which was denied. He is currently serving time in Nevada's Lovelock Correctional Center.

You can watch the details of the Simpson case unravel on American Crime Story every Tuesday night at 10 p.m. on FX.