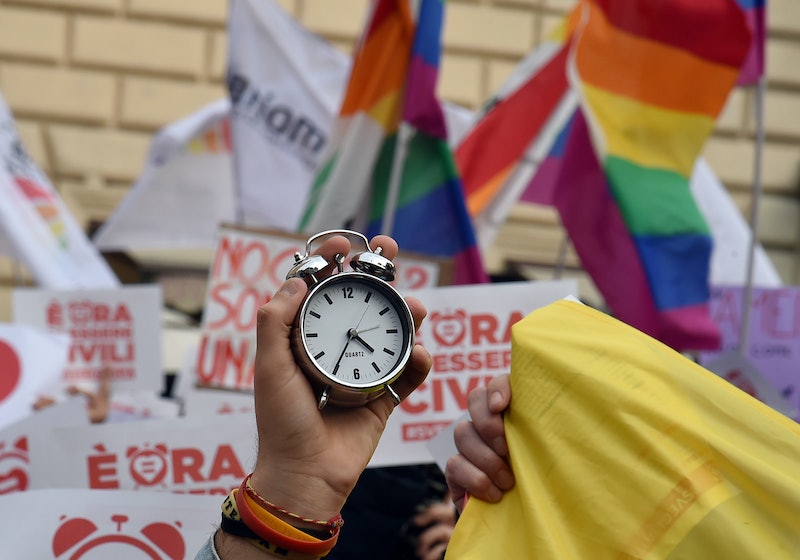 There are a lot of stigmas surrounding domestic violence. A prevailing one — one which damages both the heterosexual couples it stereotypes, and the LGBTQ couples it ignores — is that (usually straight) men are always the perpetrators of violence, and that (usually straight) women are always the victims. The truth is that anyone can be an abuser, and anyone can be a victim — including in LGBTQ relationships. In fact, domestic violence is a major issue in LGBTQ relationships, and a topic which is rarely discussed outside of the LGBTQ community.

For that matter, it's rarely discussed inside of the community, perhaps due to the fear that sharing experiences could hurt the "movement" (marriage equality, adoption rights, and so forth), or perhaps because heteronormative society has ingrained a message that same-sex relationships are unhealthy to begin with, making people hesitant to be open and risk adding more fuel to the fire. Either way, domestic violence and sexual abuse in LGBTQ relationships is grossly underreported, and rarely talked about in the media or domestic violence education — but, just like domestic violence in heterosexual relationships, it needs to be talked about. If we refuse to address a problem, how can we hope to solve it?

Before we get into some specific examples, I want to point out that there is some progress being made on this issue. More LGBTQ-friendly domestic violence services are opening, and more traditional domestic violence organizations are specifically expanding to welcome LGBTQ people. On the flip side, there remain few resources available for LGBTQ people specifically, and of the ones which do exist, many are at risk of closing, usually due to budget cuts.

Here are some main takeaways on the issue. Remember, education and awareness are often the key to making change!

1. It's Grossly Under Discussed

Significant studies and research on the topic of domestic violence and abuse in LGBTQ relationships have only come about in the past few years. Specifically, when the CDC released their study on intimate partner and sexual violence broken down by sexual orientation in 2013, "It was the first national survey estimating how prevalent intimate partner violence, sexual violence and stalking are among people who are lesbian, gay, or bisexual in the U.S.," according to the Guardian.

Personally, this rings true for me. In high school, for example, I definitely remember learning about violence against women and domestic abuse (which is very important to be taught in school); however, it was all through the lens of heteronormativity, which can feel exclusionary and isolating for LGBTQ students. While campaigns about domestic violence (which are so important) often do great work in raising awareness, they rarely include queer identified women in their statistics or examples. This invisibility hurts the LGBTQ community because as a society, it means that less and less people are aware they experience this abuse, and therein, first responders and specialists, on a whole, may be less equipped to handle these situations appropriately when survivors come forward.

For many LGBTQ people, there can be a real fear of reporting domestic violence and abuse to the police. In communities where LGBTQ rights are minimal and homophobia runs rampant, it can be or feel like a huge risk to out your sexual orientation or gender identity, even if it's in an attempt to protect yourself from harm.

Even when domestic violence is reported, a lack of collaboration between respondents and LGBTQ organizations can make things difficult: As the National Center for the Victims of Crime and the National Coalition of Anti-Violence Programs points out in their joint 2010 report, "43 percent of sexual assault and intimate partner violence service providers said that they did not collaborate with any LGBT organizations; neither did half of responding law enforcement-based victim assistance programs." The same report notes that for respondents in rural or highly conservative areas, a lack of partner agencies exist. In this case, the existence of LGBT partner organizations as well as the proper communication between agencies is definitely a step in the right direction for improving response and resources.

Remember, not all states have protections for employment and housing for LGBTQ people, so coming out to someone (even if it's in an effort to protect yourself) is potentially a risk to yourself in terms of your livelihood. Even in areas with better LGBTQ protections, there is often minimal cultural or awareness training pertaining to LGBTQ issues, so talking to authorities can be intimidating or stressful, especially if you're already in a vulnerable or heightened situation. As Anthony Armstrong writes in an op-ed for The Advocate, "Police may also have a lack of resources to refer victims and couples to due to a lack of exposure to culturally appropriate services available to the LGBT community" — which coincides with the reported need for better collaboration between agencies and LGBTQ specific resources.

Transgender people are two times more likely to experience threads and intimidation in relationships, and nearly two times (1.8) more likely experience harassment within violent relationships, found a 2012 study released from the National Coalition of Anti-Violence Programs. For anyone attempting to leave an abusive situation, it can be difficult to actually separate from your abuser, especially if they control the finances or a shared home. For the transgender population, it can be even more difficult; transgender people may rely on their partners for housing, insurance, or basic needs, as structural and societal problems often limit the options transgender people have to survive. As Darrick Ing and Tiffany Woods discuss in their article, "Why Talking About Domestic Violence in the Transgender Community Matters," sometimes transgender people may stay in abusive relationships because that person affirms their gender identity. Access to shelters can also be extremely difficult for the transgender population, as well, as they're often designated as "male" or "female" only.

According to a 2015 study from the National Coalition of Anti-Violence Programs, people who identify as bisexual are two times more likely to experience sexual violence than people who do not identify as bisexual. A 2010 report from the CDC on Victimization by Sexual Orientation had a similar finding, in that one in five bisexual women report being raped by an intimate partner in their lifetime. In addition, the report shares that one in three bisexual women (compared to, for context, one in six heterosexual women) experience stalking in their lifetime. The same report found that nearly half of bisexual men (47 percent) report experiencing sexual violence other than rape in their lifetime.

5. Even In Safe Spaces, Inclusion Is Necessary

Even when LGBTQ people do have access to safe spaces, support groups, or counseling, it's important that they not be squeezed into heteronormative boxes. As Ally Fogg over at The Guardian points out, for example, "a woman-only space does not necessarily provide protection to a lesbian victim." In a women's only space which isn't LGBTQ-aware, it's possible the abuser could gain access to the shelter or group as well, if intake staff or management are only trained to be on the look out for male infiltrators. It may also open up the frustrating "who is the man in your relationship?" conversation, hinging on a stereotype many people have about same-sex couples, which harkens back to gender norms on who is most likely to be violent.

Even on an emotional and psychological level, it's important that LGBTQ victims of violence are understood as nuanced, complex people that they are: Often, it's tempting for medical and mental health professionals to try to "figure out" why LGBTQ people are LGBTQ, or how they "fit" into a heteronormative lens, both perspectives being demeaning and demoralizing, especially in a situation where a survivor is seeking help. For men seeking protection from abuse, it can be even harder, because men are so often stigmatized as the perpetrators of violence, and not the survivors.