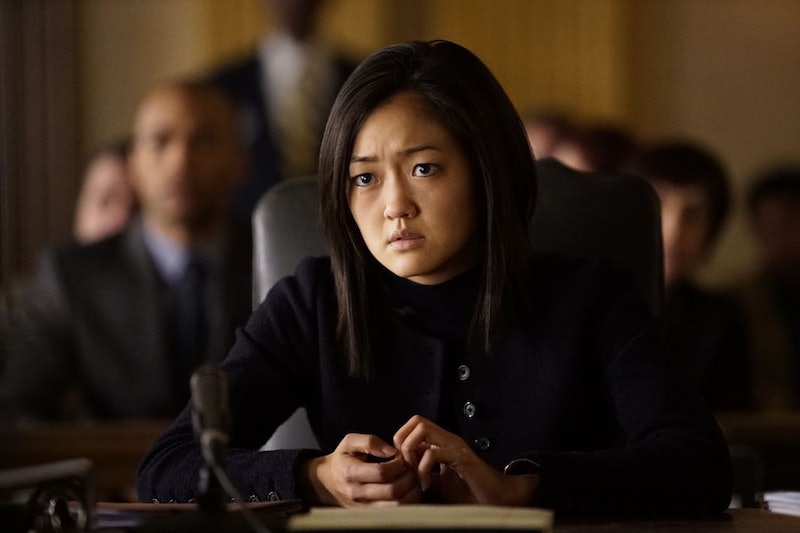 Annalise Keating should really teach a refresher class on what goes on during How to Get Away With Murder outside of her law class. Really, no one will blame you if you need more than one recap on what went down in the first half of the show's second season. But, if you didn't take notes, I've got you covered — at least in terms of the goings on of one particular person in this storyline filled with twists and turns — with a refresher about what happened to Catherine Hapstall on How to Get Away With Murder in the beginning part of Season 2.

First off, let's get the basics out of the way; she didn't appear in Season 1 — so you can momentarily forget everything you remember from the initial season of HTGAWM since it won't apply to this study group session. She enters Season 2 and quickly becomes one of Annalise's clients as one-half of the brother-sister duo accused of murder in an extremely high-profile case (you know, Annalise's favorite kind). But, this case isn't a one-off like many of the others that appear on HTGAWM and actually becomes integral to the goings on with the Keating Five and their constant struggle to hide their homicides.

So, now that the basics are out of the way, let's get down to business.

Annalise meets Catherine and Caleb Hapstall when she offers her services to the siblings after they've been charged with the murder of their adoptive parents early on in Season 2. Then, when their adoptive aunt, Helena Hapstall, is found murdered as well, the siblings seemingly become even more implicated in the crime. Unfortunately, we don't know yet who exactly murdered the Hapstall parents, though signs pointed to some suspects in the midseason finale — but more on that later!

Her Relationship With Caleb

So, the reason we know Catherine didn't have an inappropriate relationship with Caleb is because she actually had a secret relationship with Philip Jessup — who is not only a hidden Hapstall lovechild, but the result of an incestuous relationship between Helena and Catherine's adoptive father. Plus, Catherine hid the fact that she knew about Philip from everyone in her life, including Annalise and Caleb.

As if that's not bad enough to implicate Catherine as the real killer of her adoptive parents (or, at least, an accessory if Philip was the one to commit the crime), Caleb reveals to Michaela that he found the murder weapon hidden in her studio. Yikes. I'm not a lawyer but that sure looks bad.

Prior to the revelations that Catherine knew Philip, Annalise had planned to pin the Hapstall case on him in order to exonerate Catherine and Caleb. But, when the information about the gun and her relationship come to light, Annalise changes tact and fires Catherine as a client, only working for Caleb from then on out.

Of course, things go even more wrong when Bonnie calls Annalise to tell her that Asher killed A.D.A. Emily Sinclair. So, Annalise does the only thing she can think of: She has her Murder Club set Catherine up to take the fall for the murder of the A.D.A. — all held together by one of the Keating Five (sans Asher, as always) needing to shoot Annalise. But, that's a whole other story.

Between the present storyline in the midseason finale and the flashforwards earlier in Season 2, we know that Frank drugs Catherine and dumps her in the woods the night of Annalise's shooting. Catherine is then woken up by policemen and their search dogs the next morning. However, before waking up the woods, the last thing she remembers is being at the motel with Philip. With all the evidence against her in the Hapstall case and no alibi for the murder of the A.D.A., Annalise may have perfectly framed Catherine for these crimes (though we still don't know who actually killed the Hapstalls).

So, that's everything you need to know about Catherine Hapstall leading into the second half of Season 2! If you still have questions, don't worry, you're not alone and I suspect HTGAWM prefers its viewers to be in the dark. But, at least we have a whole other half of a season to this twisty, fantastic drama of How to Get Away With Murder to look forward to! Maybe we'll even get some answers along the way.