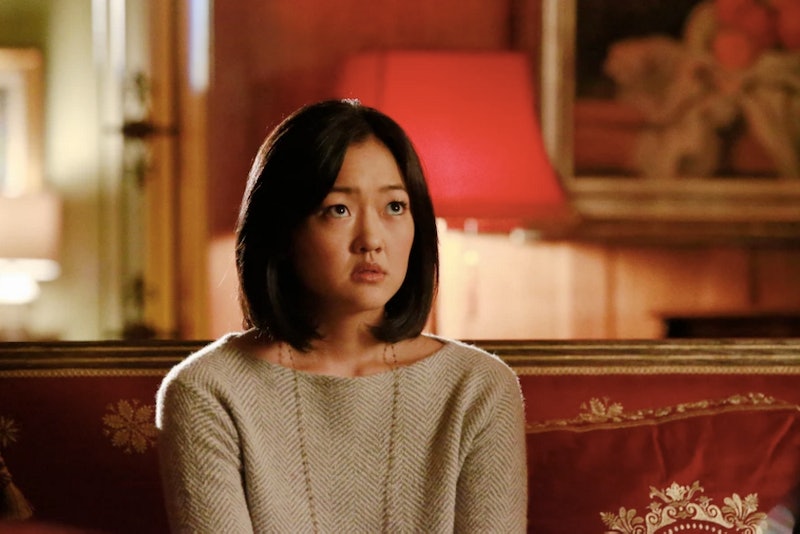 Catherine has been a big old question mark since this season of How to Get Away with Murder began. Her involvement in her parents' murder seemed to waver between in the wrong place at the wrong time and 100 percent, totally did it. In one of the many flash forwards this season, we saw Frank dump Catherine's body in a forest, only for her to wake up — shocked — and rescued by a searcher. On Thursday's finale, we didn't really get our answer to what happened to Catherine on How to Get Away with Murder , but we do know that Frank was tasked with finding Catherine, but he might have tried to do even more than just find her.

When it was revealed that she and her half-brother (I think that's how the family tree would work?) Phillip, it became painfully obvious that she was hiding a dark secret. It started making sense that Frank might have been trying to get rid of her — in the way he gets rid of people — and it didn't go as planned. After all, it seems like Catherine and Phillip were clearly working together in killing their parents/aunt.

It's still to be determined whether Catherine and Phillip actually did kill the parents, but in the meantime, Annalise ordered Frank to drug Catherine — using the drugs for Nate's wife — and bring Catherine to the Hapstall house to frame her. The only thing is, Frank had a very heavy hand on the drug dosage, and it appeared like he was almost trying to kill Catherine, aka, the thing Annalise said to not do. (It's going to be a lot harder to frame a dead person.)

We know that Catherine isn't dead, since she wakes up in a flash forward after being dumped by Frank, but is it possible that Frank thought he had killed Catherine, and he wanted to get rid of her to protect Annalise and himself? Frank is a loyal guy — to a fault, remember Lila? — but he clearly went against Annalise's request here, making this a move that could solely benefit him, and not Annalise.

But something tells me he wouldn't do that. With Annalise shot, Emily dead, and Catherine the prime suspect in both crimes, finding her alive and on the run in a forest might be enough to wipe clean the hands of all of those in Annalise's office. Plus, Frank rarely makes mistakes, let alone a mistake the size of thinking you killed someone when you actually didn't. So, maybe Frank came to the rescue and actually saved the huge hurricane that went down in the Hapstall house. Maybe everyone's going to have to send him an Edible Arrangement to thank him for saving their butts. Again.