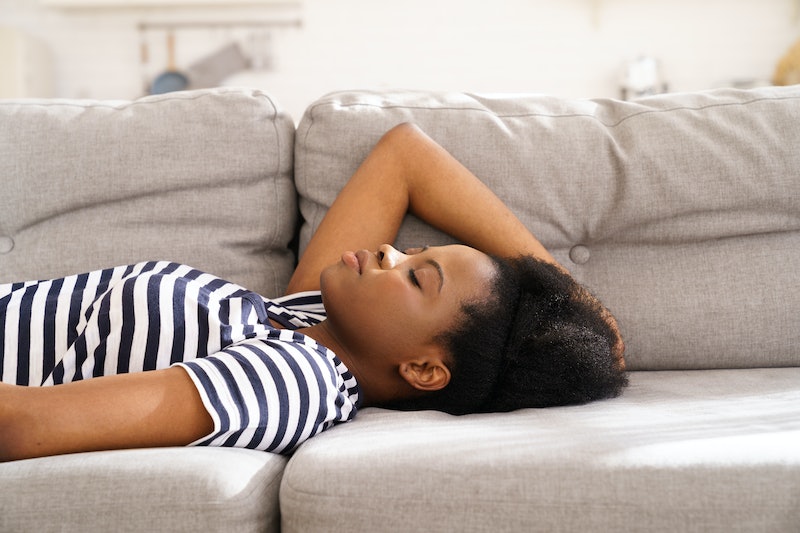 Having an iron deficiency is a problem a lot of women face, and more often than not, don't even notice. While severe anemia can cause symptoms that send you off to the doctor who gives you shots in the bum and/or super powered iron supplements, anemia can also have more subtle symptoms that aren't pressing enough to motivate you to go get a blood test. If you don't eat red meat or a lot of leafy greens or other veggies that are high in iron, you could be at risk for anemia, a deficiency that can leave you feeling sluggish and less like your buoyant self than you should. Meanwhile, it's important to note that anemia isn't only caused by iron deficiency (which is generally the most common), but can also be caused by B12 deficiency, chronic lead poisoning, chronic or sudden red blood cell destruction or sickle cell anemia.

The onset symptoms of anemia are fairly consistent across the board, with some types of anemia having slightly different symptoms. It should, of course, go without saying that if you suspect you might have anemia, you should consult your healthcare professional immediately. The body is pretty good at coping with anemia on its own, but if left untreated, can worsen and have some pretty rotten effects on your health. Keep in mind also that one of the following symptoms experienced on its own might not be indicative of anemia, but the more you have at the same time, the more likely it is you should go see a doctor. Here are some ways to tell if you might be anemic (with emphasis on visiting a doctor rather than self-diagnosing if you suspect that might be the case):

If you're constantly tired, lacking energy, and fatiguing easily, it may be because of anemia. If you've had a busy week or a bad night's sleep, probably don't jump to any conclusions too quickly. Fatigue is a symptom of many different conditions and illnesses, but if it's ongoing, you should be tested.

If you're finding your heart is beating extra fast, especially when you exercising, it might be due to anemia. This is because you have fewer red blood cells so your heart has to work a little harder to deliver oxygen to your body.

3. Shortness Of Breath, Dizziness, And Headache

If you're finding yourself short of breath, dizzy, or with ongoing headaches, particularly with exercise, this could also be because of anemia. Again, this is because your heart is struggling to deliver oxygen to the rest of your body, resulting in bodily functions, like brain activity and breathing, becoming more difficult.

Anemia has been linked to poor cognitive performance, so if you're struggling to concentrate, it might have something to do with a lack of red blood cells in your system.

As a pale skinned person myself, I know how annoying that can be to hear. I'm not anemic, just naturally ghostly. But if your skin is starting to look particularly colorless (the natural rosiness disappears from your cheeks, for instance), it could be a symptom of anemia.

Speaking of your blood struggling to circulate when you're anemic, it can also lead to cramping in your extremities, especially your legs, which, duh, are a fair distance from your heart. This will especially happen when you're moving around a lot or exercising, where efficient circulation is needed to increase to send blood around the body.

Insomnia is not a direct symptom of anemia, but it is related. Fatigue and drowsiness, weirdly, can actually cause insomnia, so where you have those and they're caused by anemia, it's likely that insomnia will follow. Likewise, bodily cramping and RLS (restless leg syndrome) caused by anemia can also lead to interrupted sleep.