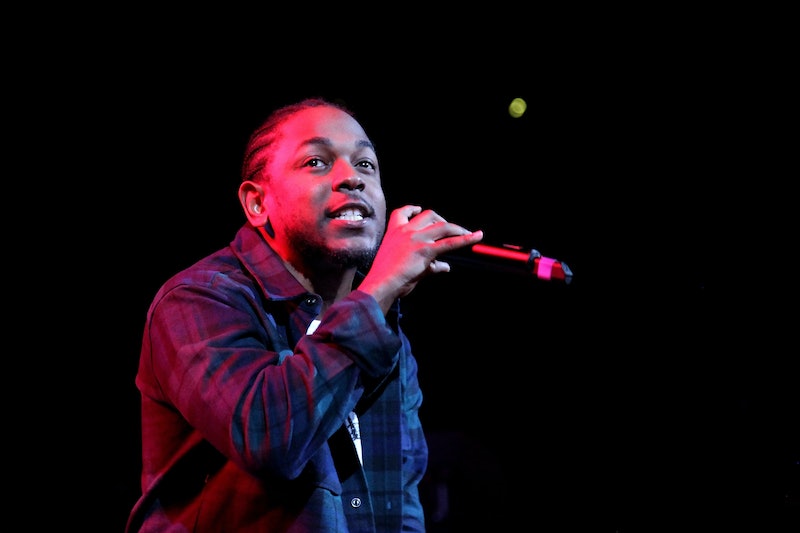 The 2016 Grammy Awards will shed a light on whether or not the music industry has evolved since last year's ceremony. And the sign of the times is Kendrick Lamar, who has been notoriously snubbed in Grammy Awards' past. Though he's accepted the losses gracefully, this year, Kendrick is circumventing any doubt that he's OK with whoever wins; in the February 4 issue of Billboard, Kendrick Lamar said of his Grammy nominations: "I want to win them all." The 28-year old rapper and visionary is nominated for an historic 11 Grammy Awards for his second full-length album, To Pimp A Butterfly, and he deserves to win every single one of them. I'd go so far as to say the Grammys owe him.

Eleven is the magic number. As Vibe reported after the Grammy nominations were announced in December, the Compton-hailing Kendrick is second only to the King of Pop Michael Jackson, who was nominated for 12 awards for Thriller. Kendrick is perhaps the most notoriously snubbed black artist at the Grammys of late, though let's not forget Beyonce, Nicki Minaj, Rihanna, and countless others. What with #OscarsSoWhite exposing the blatant racism and sexism in Hollywood, the Grammy Awards are almost on probation: if they don't give recognition to Lamar where it's long overdue, its not gonna look good.

Lamar did pick up two awards at the 2015 Grammys: Best Rap Performance and Best Rap Song for "i." But 2014 was the real snafu on the Grammys' part, when Macklemore and Ryan Lewis unbelievably beat out Lamar's incredible first album, good kid, m.a.a.d. city.

Even Macklemore seemed like he knew he wasn't the right choice. He apologized to Kendrick via text message. King Kendrick, sage and gracious as ever, said of Macklemore sweeping the rap categories: "It’s well deserved; he did what he did, man. He went out there and hustled and grinded. Everything happens for a reason; the universe comes back around, that's how it go."

But of course, because Lamar is not only a musician but a wise historian and poet, he also did well to remind people that although Macklemore (and Ryan Lewis) worked hard and deserved awards for that work, part of that is made possible because, in his opinion, black artists have to work twice as hard to be recognized in the industry. Lamar cited the fact that Nas, an undisputed hip-hop legend, was snubbed for a Grammy win during his time:

I definitely feel like they should always have more of the culture up in there, for sure, because we definitely stand out just like any other genre...We part of the world. We part of the movement. So I think any awards, including the Grammys, should always push for more hip-hop because it’s music as a whole, it’s not just splitting different regions.

Among the 11 awards that K Dot is nominated for at Sunday's ceremony are: Song of the Year, and Rap Performance of the Year for "Alright." The song is a political anthem with a charged, powerful music video, which was nominated for Music Video Of the Year; and Album Of The Year as well as Best Rap Album for his fearless, emotional and galvanizing album To Pimp A Butterfly.

Lamar losing out this year would only be another divisive and ignorant blow from the entertainment industry, in my opinion. He's not only making incredible music, but songs on political protest calling for visibility and accountability, an album that seems to perfectly capture the spirit of the #BlackLivesMatter movement. It's not only Kendrick that deserves recognition, but the fact that hip-hop is directly connected to the movement. Beyonce proved that yet again just this week with both her surprise drop of her extremely political and empowering "Formation" video, paying tribute to the Black Panthers at Super Bowl 50. These artists are demanding change.

And if that isn't enough reason that Kendrick should win, he has a very influential fan on his side. K Dot is not only a rapper, writer, and performer, but he's one of the Leader of the Free World's faves. In December, Obama told People that "How Much A Dollar Cost" from TPAB was his favorite track of the year — and that was before he invited Lamar to the White House to talk about mentorship, politics, and being black in America. If Kendrick doesn't snag those Grammys, Barack is not going to be very happy.

More like this
Taylor Swift, Kerry Washington & More Speak Out On Uvalde Mass Shooting
By Jake Viswanath
BTS Is Visiting The White House To Discuss Anti-Asian Hate Crimes With President Joe Biden
By Jake Viswanath
Cardi B Explains To David Letterman Why She Uses Her Star Power For Politics
By Jake Viswanath
President Zelensky Spoke Out On Ukraine's Chances Of Hosting Eurovision Next Year
By Sam Ramsden
Get Even More From Bustle — Sign Up For The Newsletter