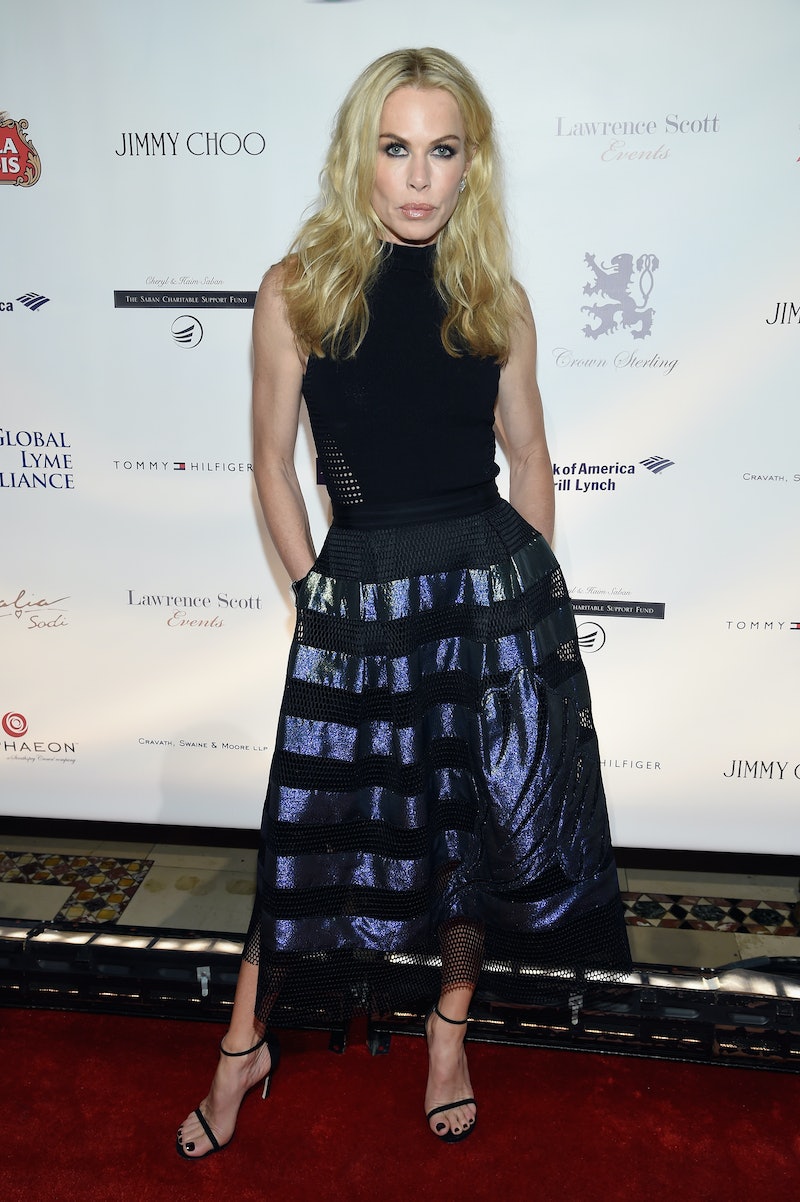 The timing of Kathryn Edwards' entrance onto Bravo's Real Housewives of Beverly Hills and the premiere of FX's The People v. O.J. Simpson: American Crime Story is, well, coincidental. A case that has been widely talked about for decades is coming to the forefront of American culture, again, not only on Ryan Murphy's true-crime series, but also with Kathryn Edwards' introduction to the women on RHOBH . Now, many eyes are back on the O.J. Simpson trial, scrutinizing every last detail like O.J. Simpson's apparent suicide note, read by Robert Kardashian at a press conference the day of the infamous Bronco chase. In the letter, of which CNN has the text in full, it appears that Simpson mentions Kathryn Edwards in the note, while addressing his friend Marcus Allen.

Despite only being on RHOBH for a few episodes so far, Edwards has already taken issue with "friend of the show" Faye Resnick (best friend of Nicole Brown Simpson) for something Resnick wrote about Edwards in her 1994 tell-all, Nicole Brown Simpson: The Private Diary of a Life Interrupted. In the book, Resnick alleged that Simpson's friend Marcus Allen (Edwards' husband-at-the-time) and Simpson's ex-wife Nicole Brown Simpson had an affair. People reported that Edwards and Allen both deny the accusations.

Now, looking back at Simpson's apparent suicide note, one particular line stands out. After addressing the murders of his ex-wife and Ronald Goldman, Simpson took a moment to personally address his close friends in the letter. In it, as CNN reported, he mentioned a "Marcus."

Marcus, you've got a great lady in Catherine, don't mess it up.

It should be noted that the letter includes an alternate spelling of the name "Catherine," according to CNN's documentation of it. It should also be noted that it would be a rather large coincidence for Simpson to be friends with two couples by the name of Marcus and Catherine/Kathryn. Kathryn and Marcus Allen married in 1993, and the note was written in 1994. Of course, it's also entirely possible that te letter refers to anyone else by the name of Marcus of Catherine, since neither are addressed using a last name. Just some food for thought as American Crime Story and RHOBH continue to explore similar topics.