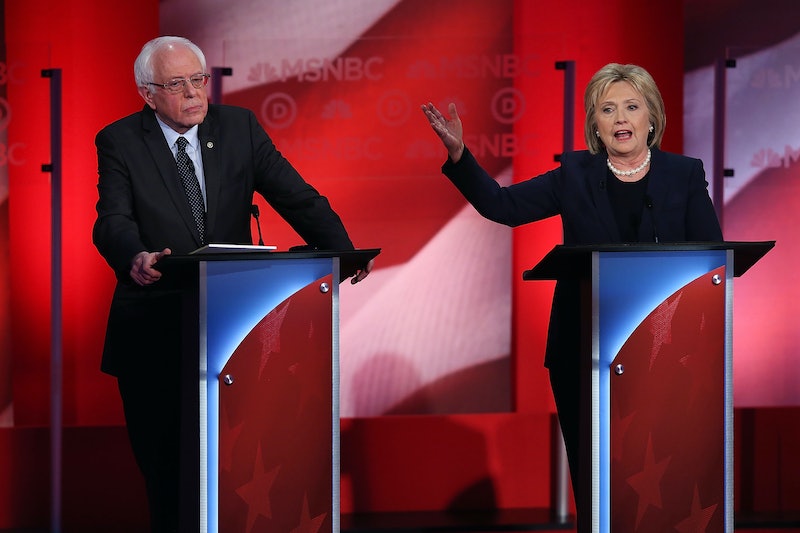 Get ready for... another presidential debate! This showdown is a Democratic one between the two remaining candidates, Bernie Sanders and Hillary Clinton, and comes only two days following the New Hampshire primaries. Set for Thursday, the debate should take a bit of a new direction since the first caucus and first primary will have passed. The intensity is increasing with each debate, and now even Bill Clinton is ready to pounce on the Sanders bandwagon — and as everyone knows, when spouses get involved, the game is on. How exactly will Thursday's debate prove different from past debates, and how can you watch the Democratic debate if you don't have cable? I'm glad you asked.

PBS is hosting this debate, which begins at 9 p.m. ET, and NewsHour co-anchors and managing editors Gwen Ifill and Judy Woodruff will moderate. PBS and WETA — Washington D.C.'s public television station — will broadcast the event nationwide, but for those without cable, and with the help of Milwaukee Public Television and WUWM 89.7 FM, the debate will stream online at pbs.org/newshour.

This debate takes a slightly different form because it will take place on the University of Wisconsin, Milwaukee, campus, which has never hosted a presidential debate before. This adds a whole new vibe to the candidates' personas and representations of self; it's always fun to see how they relate to their surroundings.

Scott Emmons, who is the dean of UW-Milwaukee's Peck School of the Arts stated:

I think this is an opportunity for all eyes to be on our campus.

He also added, "It's been kind of wild and crazy and a little bit intense. They will be using many of our classrooms and such for dressing rooms for the candidates and for staging areas. We've got a VIP reception right in the room behind us." Obviously, the campus is excited for the opportunity to host this major event.

Hopefully, this event will help to further illuminate the differences between Clinton and Sanders, further clarifying the contrasts to help voters decide in the primaries that lie ahead. Perhaps this post-primary trajectory will help bring about viewership in higher numbers.

More like this
'Waterloo Road' Is Back, With More Than A Few Familiar Faces
By Sam Ramsden and Vivian Iroanya
Prince William Condemns “Unacceptable” Comments Made To A Black Guest At Buckingham Palace
By Shahed Ezaydi
Matt Hancock Broke a Major Rule With I’m A Celeb
By El Hunt
What To Know About Martin Bashir After Watching 'The Crown'
By Bustle UK
Get Even More From Bustle — Sign Up For The Newsletter