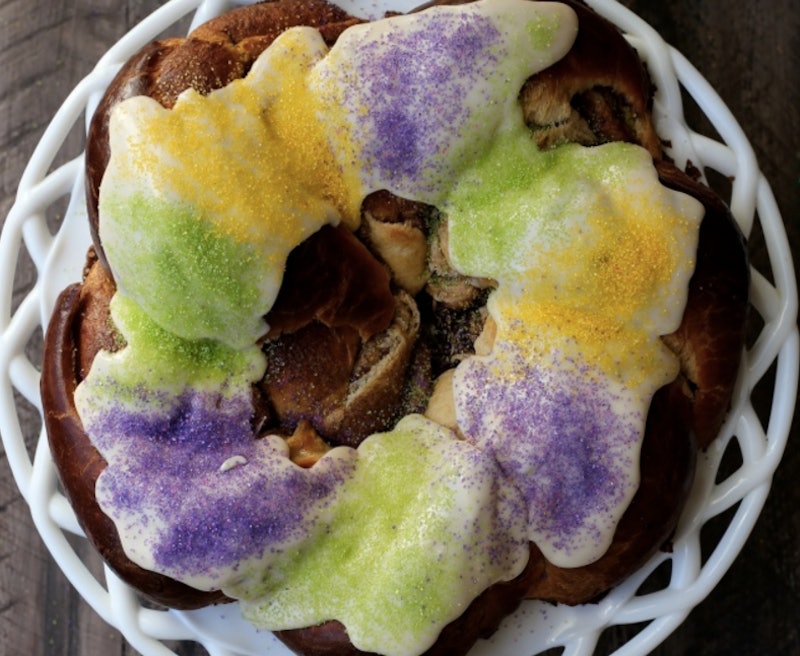 It wouldn't be a party without cake, and Mardi Gras — arguably the biggest party of them all — is no exception. The good times can't roll without a little King Cake on the menu, but if you've never ventured over to the French Quarter this time of year, you might be wondering: what is King Cake, exactly? Short answer: Insanely delicious. But the history behind the Mardi Gras tradition is a bit more complicated than just that.

Even if you aren't an experienced Mardi Gras reveler, you've likely at least seen photos of a King Cake before on Instagram. They're hard to miss, mainly because they're so freaking beautiful. Traditionally, King Cake is made of decadent, brioche dough laced with cinnamon, and topped with colorful glazed icing and gold, green, and purple sprinkles. The cake is baked in a ring shape without a center, and buried in the batter is a small, plastic baby figurine. When the cake is baked, whoever ends up with the slice containing the baby is said to have good luck — but is also responsible for bringing a King Cake to the following year's festivities. It's a sweet tradition that's been synonymous with Mardi Gras since the 1870s, when it became popular in New Orleans. However, the cake's history dates back even further than that, and comes from a Biblical background. Don't believe me? Here are five facts about King Cake that may come as a surprise:

1. It gets its name from the three wise men in the Bible

That's right — the cake's title is derived from the three kings bearing gifts who were said to have visited the newly born Baby Jesus the 12th night after Christmas. King Cake is usually first served during Epiphany, when the Magi are believed to have made their visit, and is a mainstay at tables through Mardi Gras.

2. There's no right way to make a King Cake

The traditional King Cake recipe is usually a simple dough seasoned with cinnamon, nutmeg, and brown sugar, but can be altered however the baker deems fit. Some come with fruit fillings, while others are stuffed with cream cheese and pralines.

3. King Cake parties are a thing

A whole party dedicated to cake? Consider me interested. In New Orleans especially, people will devote entire parties to sharing their King Cake with friends and family. Whoever receives the baby figurine in their piece is considered to be the king or queen of the party.

4. There's a reason why they are decorated purple, green, and gold

Those are the three colors that have come to represent Mardi Gras, and each hue stands for something different — green represents faith, purple justice, and gold power.

5. You can order them online

You could try walking into your own local bakery for one of these seasonal treats (Dominique Ansel in New York City, for instance), but if that doesn't work, order King Cake online. For an authentic taste, try placing an order with New Orleans' famous Randazzo's Camellia City Bakery. A small cake will cost you a little under $50.

Feel like trying your own hand at making one of these decadent cakes? Use this recipe by Joy the Baker. You can find plastic baby figurines online to insert yourself.