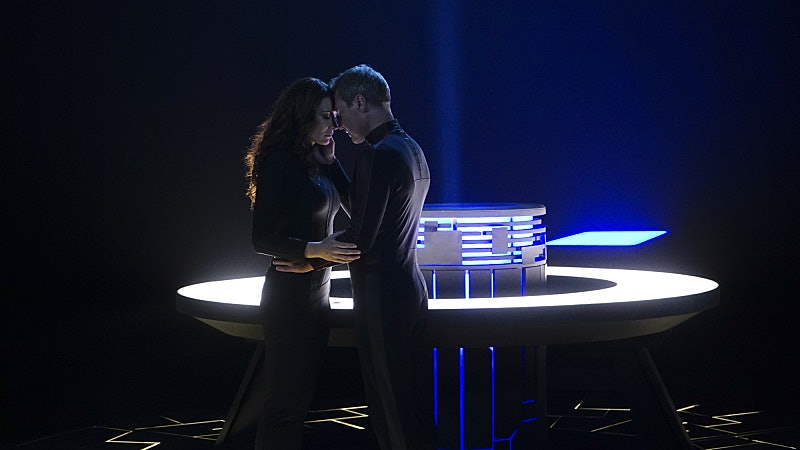 It's ironic that I'm about to say this because Kara spent most of the episode in a fantasy dream, but Supergirl just got real. After proving that she still loves her niece and may have lost sight of her evil goals, in a moment of defense Alex Danvers killed Astra on Supergirl — at least, that's what it looked like. Is she really gone?

She was stabbed with a glowing kyptonite sword. First of all, cool. Second of all, no! Alex was justified in what she did, technically. The General was attacking Hank Henshaw/J'onn J'onzz, and Alex acted quickly to save her boss. I just wish there was another way. Plus, the fact that Hank lied for her (one in a series of mistakes he made in the episode, but let's not get into his behavior at CatCo acting in Kara's assistant job because I am still cringing) and took the blame for Astra's death. Kara doesn't know that her sister took her Aunt's life, and that secret is going to have an ugly fallout for sure.

Could Astra come back to life? Laura Benanti is clearly not off the show — she can still play both sisters in flashbacks, and don't think I haven't forgotten about that weird Alura hologram that the DEO uses for consulting purposes. So, we'll see more of her no matter what. I don't know Kryptonian medicine as well as I would like, but it seems likely that there's a way she isn't really dead. The problem is, I don't think Non wants her to come back at the moment, and her body is in his custody. She was voicing doubts about their plans, out of concern for Kara, that really seemed to be crimping his "take over the word" style, if you know what I mean.

That said, I don't feel like Astra's story is over and I definitely don't like the looks of Non's crew without their fearless lady leader — so I hope there's a way she can pull through from this brief spat with death. Crazier things have happened on Supergirl, that's for sure.