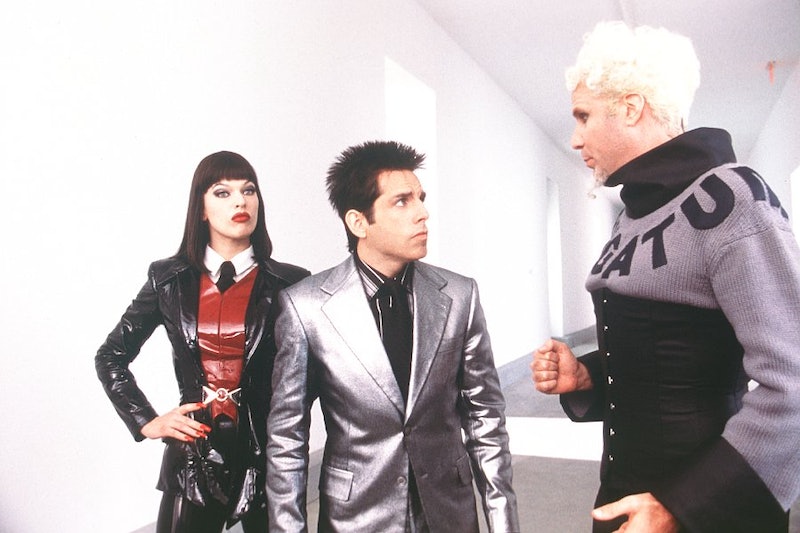 Zoolander is one of my comfort comedies. You know the ones — these are the movies you watch when you're sick or in need of some self-care, whose best lines you know like back of your hand. And Zoolander knows how you and I feel about it. When Ben Stiller and his co-writers set out to write the sequel, it sounds like they were making a love letter to the fans. I haven't seen the film yet, but I couldn't be more excited to hear that so many characters from the original movie are returning. Even Milla Jovovich's fierce Katinka Ingabogovinanana will be appearing in Zoolander 2. Mugatu's co-conspirator in the plot to assassinate the Prime Minister Of Malaysia played the role of the cold and dangerously fashionable designer representative for Derek's sake, but there was a lot more her than some incredible vinyl blazers. But what happened to Katinka at Zoolander 's end, and how can she be back in the sequel?

Katinka is an amped-up version of the fearsome fashion plate stock character. (Meryl Streep played a much softer take in The Devil Wears Prada.) She's designed to play off the concept that women in fashion are stony and punishing, maybe because they have the ability to decide which trends live or die with a snap of their fingers or maybe because everything they wear is so uncomfortable. Mugatu and Katinka accessorize their assassination scheme with lots of judgement about the people around them, none of whom could ever be as chic as they are. The worst insult that Katinka can think to throw at Matilda (Christine Taylor) is that her outfit is cheap. Matilda is probably like me, who enjoys telling perfect strangers how little I paid for everything I'm wearing at any given time. But Katinka can't fathom that anyone — any woman, especially — could possibly rank style so low on her list of personal priorities.

It's Katinka's duty to carry out Derek's brainwashing, and she sits front row at the Derelicte fashion show to make sure he finishes the job. When Hansel kicks out the power to sound system, Derek snaps out of it and lets go of the Prime Minister. Katinka jumps onto the runway (looking amazing in her catsuit and blood-red lip, by the way) to take out Derek before he can snitch on her and her boss. Hansel's yo-yo skills yank the pistol out of her hand, and then Matilda kicks her legs out from under her and sends her crashing to the floor.

Does Katinka get arrested? Mugatu is tackled by police on screen, but the last the audience sees of Katinka in Zoolander is right before Derek and Matilda's kiss. Just in the background, Katinka takes a quick look from side to side, scoops up her razor-sharp stilettos, and slips away in all the commotion. She always seemed trickier than her boss (she didn't invent the piano key necktie, but still), and I like to think that she escaped to scowl another day.

The trailer for the sequel doesn't reveal the whereabouts of Katinka Ingabogovinanana, but it does show how Mugatu tricks Derek into helping him escape from his high security prison. And if he's smartened up at all, his first step in his next evil fashion plan should be retrieving his henchwoman from wherever she's been hiding out.