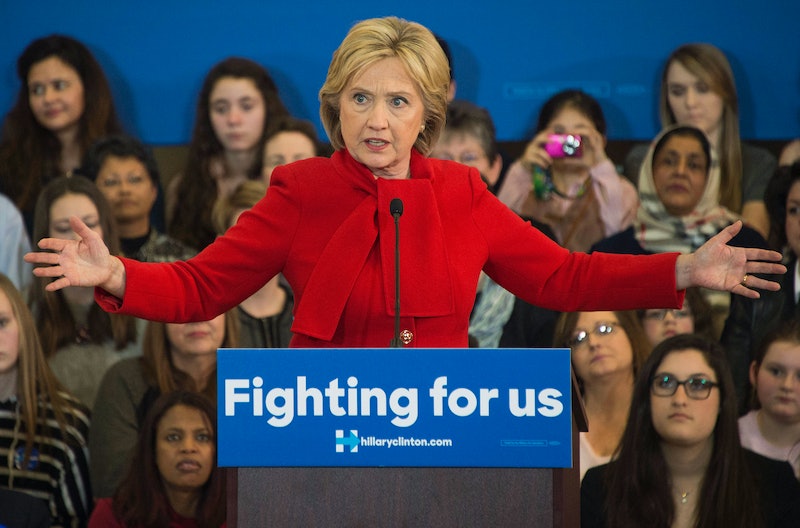 Some women who endorse political, social, and economic equality between men and women — the very definition of feminism — feel as though they are being pressured to prioritize gender over politics in the upcoming presidential election. Politician Madeleine Albright has come under fire for seemingly attacking young feminists who do not support Hillary Clinton, the Democratic candidate who has the potential to become America's first female president. "There’s a special place in hell for women who don’t help each other," Albright declared at a New Hampshire rally. (She later clarified to TIME: "I said that I think that people need to understand who has been really fighting on their behalf on issues that are of interest to women, and clearly Hillary Clinton has.")

According to this school of thought, it matters less whether Bernie Sanders' policy proposals appeal to you more than Clinton's proposals. Sanders is a man. Clinton is a woman. Unfortunately, this polarized perception of the presidential race reduces the value of a woman's political opinion, as well as her intellect, and inflicts lasting damage on what should be a united feminist movement.

Furthermore, encouraging a woman to vote based on the gender of a candidate disregards her ability to actively participate in the political sphere in an opinionated and educated manner. If electing a candidate who supports feminism is the ultimate goal, then Clinton and Sanders supporters need to see eye-to-eye and realize that both candidates support equality between men and women. In fact, it's this sort of commentary that alienates men from a movement that needs the participation of women and men alike in order to succeed.

At the New Hampshire rally on Saturday, Albright seemed to condemn women who don't perceive Clinton's female identity as a reason to unquestionably side with her:

People are talking about revolution. What kind of a revolution would it be to have the first woman president of the United States? ... We can tell our story of how we climbed the ladder, and a lot of you younger women think it’s done. It’s not done. There’s a special place in hell for women who don’t help each other!

Though Albright's "special place in hell" line has been used under many contexts and was probably incorporated to get a giggle from the audience, her words were polarizing. It may come as a surprise to Albright's generation, but some of us "younger women" don't support Clinton and absolutely do not believe that men and women have achieved equality in society yet. Electing a female president is certainly a sign of progress, but politics is a tricky thing. I for one am not so naïve as to believe that Clinton will be able to, for example, convince Congress to pass laws that mandate equal pay better than Sanders could.

Both Sanders and Clinton are feminists, rendering Albright's remarks devoid of any valuable commentary on feminism as a movement that can be furthered by women and men. Projecting the "who is a better feminist" argument onto Democratic candidate supporters represents an extension of the frivolous tit-for-tat bickering among politicians that generates intense hatred and distrust for the inner workings of campaign politics (*cough* the GOP field *cough*).

Instead of pitting feminists who support Clinton against feminists who support Sanders, female icons should be encouraging women to find common ground. Ultimately, it's about standing together and promoting equality regardless of whether you support a male or female candidate. The feminist fight belongs to everybody, but in order to win, we have to be more inclusive.

More like this
Beyoncé & Madonna’s “Break My Soul” Remix Honors A Group Of Black Icons
By Stephanie Topacio Long
22 Movies On Netflix That Are Perfect For The Whole Family
By Bustle Editors
The 5 Best Underwear For Preventing Wedgies
By Lisa Fogarty
Are John Legend & Kanye West Still Friends? The Singer’s Latest Update Is Candid
By Brad Witter
Get Even More From Bustle — Sign Up For The Newsletter