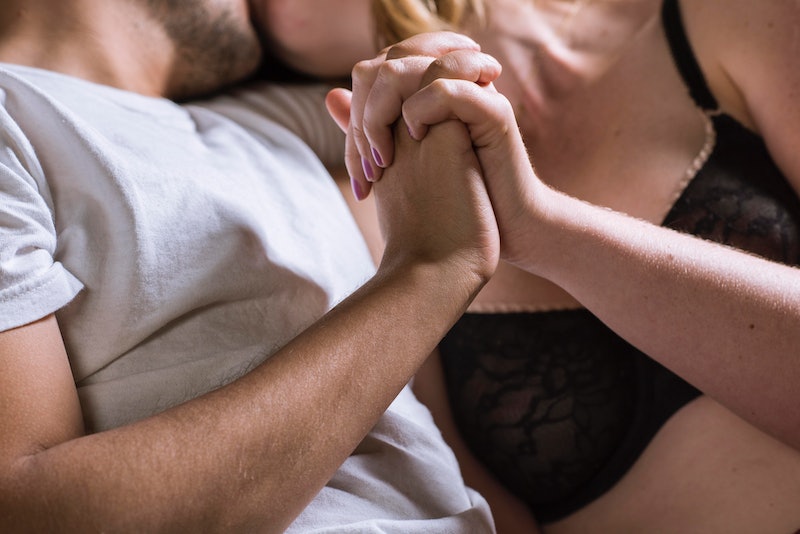 How do you maintain a satisfying sex life in a long-term relationship? It's the ultimate test, because sex is usually easy at first. As much as you need to work out how to have sex with a new partner, normally you simply can't keep your hands off of each other. And then you get really good at having sex with each other, and sex lives have been shown to peak around the on year mark. But what happens then? How can you keep it going in the long run? It's awful to think that loving, exciting relationships can die out just because you feel like you've completely lost interest in bed.

The good news, according to research coming out later this month in the Journal of Sex Research, is that it doesn't have to die out. Some people keep interesting, satisfying sex life going for decades. Researchers from Chapman University, California State University, Sonoma State University, and at the Kinsey Institute at Indiana University surveyed nearly 39,000 heterosexuals who had been in relationships for at least three years. And there's a good portion who still love getting it on and reported having satisfied sex lives. And the key to keeping happy in a long-term relationships? Well, there are a lot of things, but it seems to be mostly about variety and communication.

Here's what you should know:

1. Nearly Everyone Is Happy With Their Sex Lives At First, But That Drops

2. Part Of It Was Just About Frequency

So obviously sexual satisfaction doesn't mean the same thing to everyone, but there seemed to be a difference between men and women. The biggest indicators for men were: having the right mood, sexual variety, and communication. Which makes sense, because communication is always important and, if we're talking long-term, I can imagine you'd want to change it up a bit.

As you can see, the number of orgasms matter to women in a way they don't to men. It would be interesting to see if that changes with a younger demographic, who seem to be closing the orgasm gap. But communication and mood appeared for both men and women, showing how important they are for long-term sexual satisfaction.

5. These Five Things Are The Most Important When Talking About Sex

But all the different ways we communication about sex were valuable. The study identified five different behaviors:

1. Say they praise their partner for something they did in bed

2. Are asked by their partner for something they want

3. Ask for something they want from their partner

4. Talk on the phone or email with their partner during the day to tease about something they want

5. Ask for feedback on how something felt

The more of these engaged with, the more likely they were to be satisfied. This emphasizes how important a holistic, compassionate approach is to discussing your sex life.

So if you're looking for the best, most direct way to reconnect and set the mood, this is it.