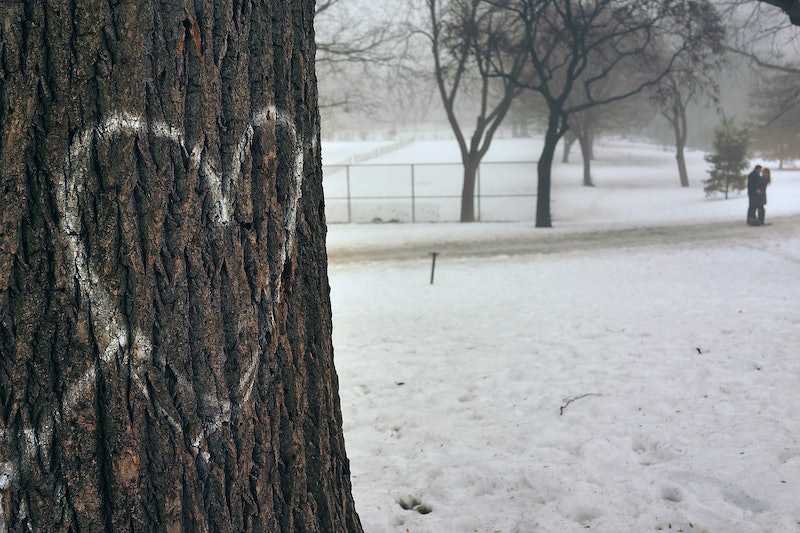 When it comes to having sexually satisfied and fulfilled relationships, the United States doesn't exactly have anything to brag about. Whereas 67 percent of Nigerians report they are sexually satisfied, only 48 percent of Americans can say the same. Places like Russia, Brazil, and China are doing the deed far more often than us, with the top spot going to Greece, where 87 percent of people have sex at least once a week.

But what makes for a sexually fulfilling relationship? Is it simply about having an orgasm every single time, or is there more to it than that? A recent study, published in Feminism & Psychology, asked 40 people what it meant to be sexually satisfied. Although having an orgasm did constitute satisfaction for a few, what really sealed the deal was the feeling of complete trust and security they felt for their sexual partner. It makes sense, since, according to Psychology Today, one of the many rewards we get from from being sexually satisfied is that "sexual activity builds and maintains feelings of love and even happiness that endure over time." Our overall relationships are better for it.

We talked to a few women in self-reported sexually fulfilling relationships to see what it takes to be that, well, fulfilled. Here's what they had to say.

SECRET #1: THEY HAVE SIMILAR SEX DRIVES

For the majority of the people Bustle spoke to, it seems that having a similar sex drive (aka being sexually compatible) was the #1 secret to having a truly sexually fulfilling relationship. After all, if one person is always in the mood, and the other isn't, it can make for some issues: guilt on the part of the one who just doesn’t want to do it, and disappointment on the part of the one who wants to get it on 24/7.

As Catherine, 26, a writer in New York City, tells Bustle, “My partner and I both have insanely high sex drives, so much so that we've each had problems with past partners being less into it. We talk about sex a lot, whether discussing things we did or didn't like, or making up new scenarios over Gchat and text. But it's not just to titillate; when we talk about sex, we're usually doing so in a thoughtful and considerate way.”

Jen, 35, a nurse and mother of three, feels the same way. “We have pretty much the same drive. I've never found much of a compelling reason to take it off the table except for being so tired that either of us would be comatose for the event. In that case, it's a nap and then game-on.”

Another aspect that adds to sexual fulfillment? Being into similar kinks. Someone with a Red Room of Pain in their closet probably isn’t going to mesh well with a partner whose idea of getting kinky is to do it with the lights on.

SECRET #3: THEY COMMUNICATE EXPLICITLY ABOUT SEX

Mel, a 27-year-old exotic dancer, says that communication, especially in the bedroom, is what keeps her relationship fulfilled. “You need to let them know what you want and need, even if it’s a bit demanding. I’m not afraid to say things like, ‘I don’t care many times you try, you’re not going to stick it in before I get oral’ or ‘this position bores me to tears’ or ‘just like that; two fingers, not three… right there.’”

SECRET #4: THEY'RE ALWAYS UP FOR EXPERIMENTATION

Being willing to experiment, within the parameters of your comfort level, keeps things exciting and satisfying. After all — you never know what’s going to turn you on and get you off until you give it a try.

“Being at least willing to give something a go if the other person is super into it and being super courteous of each other goes a long way,” says Becky, 30. “We try to be fair about that balance, and it usually works out well for us."

According to these sexually-fulfilled couples, sex shouldn’t be just regulated to the bedroom. Sex is about not just experimenting and exploring physically, with toys and new techniques, but also about branching outside the constraints of the bed.

“We live by the rule of thumb that anytime and anyplace, as long as we’re discreet, is good for sex. It keeps things alive and you never know if a boring dinner party will end in a f*%k in the bathroom,” says Sarah.

Jen agreed saying, “Any point or place that works — shower, closet, wake [up] at 3 a.m. then go back to sleep — whenever and however.”

SECRET #6: THEY NEVER STOP FLIRTING WITH EACH OTHER

Just because your days of trying to score with hot strangers at the bar with your mad flirting skills are long gone, it doesn’t mean you should stop flirting all together. Flirting is fun and can make for some playful foreplay before you actually do the deed.

According to Becky, who has been with the same partner for 10 years, flirting really is essential in keeping one’s relationship sexually fulfilled. “I think continuing to flirt and be silly no matter how long you've been together is important. We’ve been together 10 years now, and we still stop to check out each other and flash each other around the house, randomly saying, ‘Hey, cutie, what are YOU doin’ tonight?’”

Leigh, 34, also stands by the flirting technique: "I still love to flirt with my husband. With just a seductive wink or a pinch of his butt, we both know what's in store once the kids are in bed. It also reminds us of our dating days and that's fun."

More like this
Are Quality Time & Gift-Receiving Love Languages Compatible?
By Lexi Inks
The 19 Best Tweets & Memes About Bisexual Awareness Week
By Lexi Inks
These 4 Signs Are The Seductive Sirens Of The Zodiac
By Brittany Beringer
Why A Libra & Libra Couple Might Become Codependent
By Kristine Fellizar
Get Even More From Bustle — Sign Up For The Newsletter