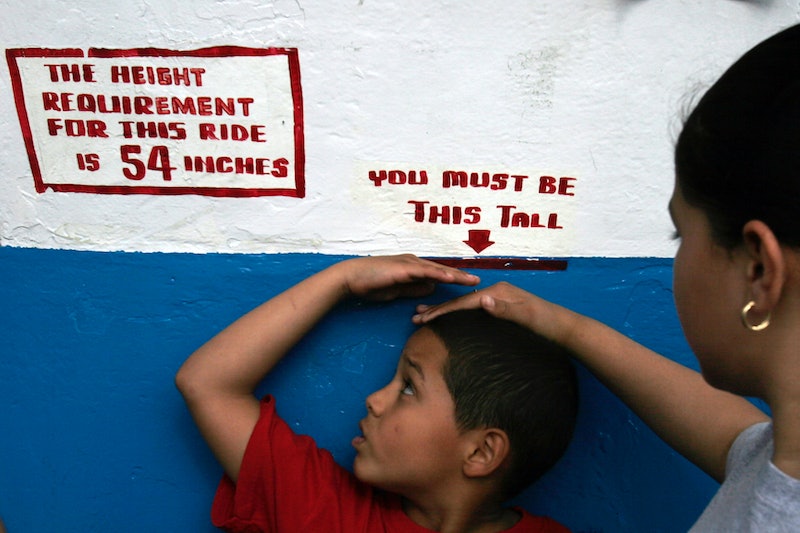 Always feel like somebody's watching you? Well, you might just be short. According to an Oxford University study, short height is linked to feelings of paranoia, distrust, and inferiority. The study's findings suggest that short-man syndrome, or the Napoleon complex, really does exist. Professor Daniel Freeman, who led the study at Oxford's Department of Psychiatry, says that being taller denotes more influence over others.

"Being tall is associated with greater career and relationship success. Height is taken to convey authority, and we feel taller when we feel more powerful. It is little wonder then that men and women tend to over-report their height."

Researchers used a virtual-reality exercise to conduct the study. They first had testers "travel" through the London Tube at their normal height. The second time, however, the travelers' points of view were lowered by 10 inches.

"The results were very clear: lowering of height led to more negative evaluations of the self compared with others and greater levels of paranoia," according to the report, which was published in the journal Psychiatry Research.

Even more interesting? The study only measured women. Freeman and his team picked "60 adult women from the general population who were prone to having 'mistrustful thoughts.'"

Were there no men with "mistrustful thoughts" available? Do you think men would feel a lesser or greater sense of paranoia if the researchers lowered their heights by 10 inches? My money would be on the latter, by a long shot.

Besides having trouble reaching high shelves and not being able to see ANYTHING at concerts, us short people also earn less money in their lifetimes. According to a recent Australian study, men who are six feet tall earn about $1,000 more per year.

"Our estimates suggest that if the average man of about 178 centimeters [5 feet 10 inches] gains an additional five centimeters [2 inches] in height, he would be able to earn an extra $950 per year — which is approximately equal to the wage gain from one extra year of labor market experience," said study co-author Andrew Leigh, an economist at the Australian National University.

And a 2003 U.S. study found that someone who is five inches taller than a coworker would be expected to earn $5,525 more per year. Arianne Cohen, who wrote The Tall Book , says that people with a height advantage tend to get noticed from a very young age.

"Tall people tend to act like a leader from a very young age because other children relate to them like a slightly older peer. In the workplace, when you're automatically acting as a leader, that's really important when it comes time for promotion."

More like this
5 Crystals To Manifest Better Sleep
By Megan McCarty
What Dreams About Being Lost Mean, According To Experts
By Carolyn Steber
6 Abortion Advocates To Follow On TikTok
By Sara Youngblood Gregory
11 Surprising Benefits Of Journaling
By Carolyn Steber
Get Even More From Bustle — Sign Up For The Newsletter