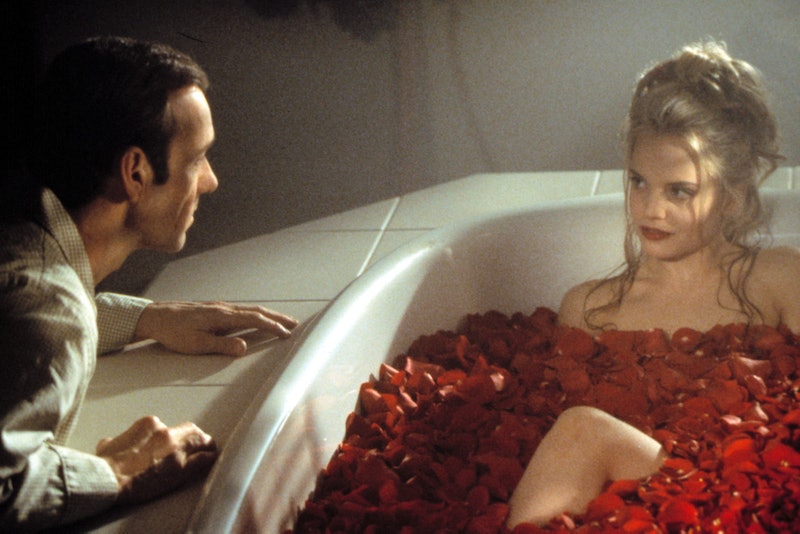 There are few movies that feel relevant no matter what stage of life you're in, as it's rare to connect with something at 22 the same way you did at 12. But the movies that do stand the test of time tend to have much greater meaning, and you're likely to rewatch them a million times. Personally, one movie I'll always rewatch is American Beauty. Even with all its dated slang and spaghetti-strap belly tops, the film's 1999 drama never gets old. It still carries clout as a must-see almost 20 years later, in part because of its fantastic acting, screenplay, and cinematography (for each of which it won an Academy Award, as well as the Oscar for Best Picture).

But what makes American Beauty special to me is more than just its cinematic fame, or even its actual narrative; it's all the tiny moments that show the flaws and virtues of the various characters, and of life in general. These moments are what keep drawing me back to watch the movie year after year, even though I know I could just go watch Kevin Spacey in House of Cards on Netflix. Here are eight reasons that American Beauty still has my heart.

Ricky Fitts' monologue about why he films things is heartbreaking, visceral, and a reminder that there's magic in even the most mundane things. If you're not familiar, watch for yourself.

21-year-old Bentley was an unknown when he was cast in American Beauty, but his depiction of Ricky Fitts was absolutely amazing. 15+ years later, it's equally amazing to rewatch the film knowing that the actor would later spiral downward into a drug addiction, fight the battle of his life to get out of it, and then rise up again—now sober— to nab roles in films such as Interstellar, The Hunger Games, and many more.

The movie's protagonist blackmails his boss, quits his job, buys his dream car, and tells off his controlling wife. Is he totally in the right? Well, no, but it's vicariously liberating to watch Lester burst out of the oppressive little box that has become his day-to-day life. It makes you wonder, what would you do if you felt like you had nothing to lose?

4. Realizing The Flaws In Angela's Worldview

The superficiality of Mena Suvari's character Angela is supposed to be glaringly obvious, but as a teenager I loved her line "I don't think that there's anything worse than being ordinary" so much that I made it my senior yearbook quote. It was also one of my core beliefs at the times, but seven years later I couldn't disagree with it more. Watching Angela nowadays reminds me that even though movie characters are stuck in their same beliefs forever, I myself don't have to be.

As Jane falls in love with Ricky, all of her walls come down until she's ready to give up everything for him. It's an unconventional but incredibly beautiful love story, and it always reminds me of the times in my own life that I've fallen hard and fast. It goes to show just how deeply one can feel for another person, and that being able to feel this intensely is a priceless aspect of human nature— even when it hurts.

The movie constantly urges the viewer to "look closer," and this tagline has been interpreted many ways. Personally, I've always taken it as encouragement to never take things at face value. A perfect-looking suburban family can hide a world of pain and f***ed up interpersonal dynamics. A person who is bristly on the surface can actually have great depth and capacity for love. There's always something more than just what you can see.

The music in this film is incredibly memorable, yet it's not a melody that you can easily recreate for someone else. The score is as effortlessly ethereal as the movie itself, adding another layer of subtle magic to the viewing experience.

I don't want to spoil it just in case you haven't seen the movie, but the final scene with Kevin Spacey's voiceover will seriously shift your outlook on what's important in life. Rewatch as often as possible to keep this mindset fresh.

Even though there are countless other amazing movies, you can see why this particular film has a firm hold on my watch-again list. It's hard to stay mad when there's so much beauty in the world, and it's hard to start House of Cards when American Beauty is in my queue, ready to be re-watched over and over again.