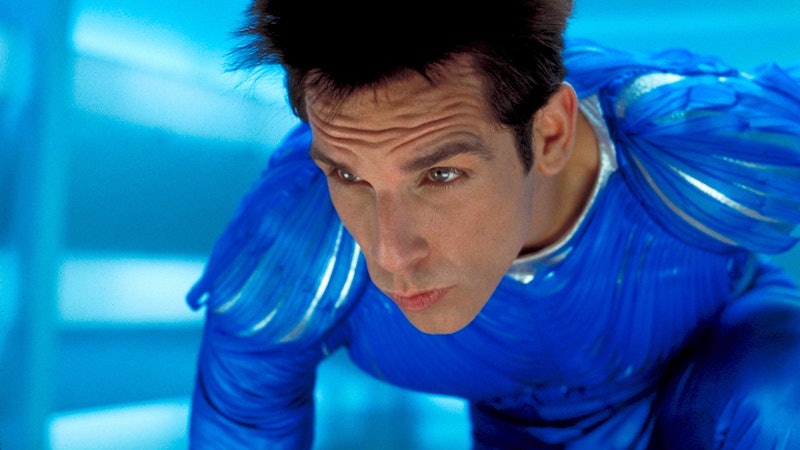 I don’t know about you, but I’m ready for the second coming of the most important fashion-themed comedy of all time. Zoolander 2 premieres on Feb 12, and that's almost 15 years after the original hit theaters. From the look of the trailers, the Zoolander sequel is going to be full of callbacks to the 2001 film; and most of its main cast is returning, including Ben Stiller as Derek, Owen Wilson as Hansel, Will Ferrell as Mugatu, and Christine Taylor as Matilda. But 15 years is a long time, and even fans of the movie are bound to have forgotten a few key details. This quick and dirty recap of what Zoolander is about ought to help.

This catch-up session is for the uninitiated too. It’s been recently been brought to my attention that there are people who have not seen Zoolander, and thus don’t know what they’re missing. Those people shouldn’t be doomed by ignorance to miss out on the return of supermodel superfriends Derek and Hansel. Read on to find out what happened in the first movie, and you’ll be a "Blue Steel" expert in no time.

1. The Prime Minister Of Malaysia Vows To Raise Minimum Wage & The Fashion Industry Isn't Happy About It

Did you know that the inner circle of the fashion elite function as sort of a secret society who run the world from behind a curtain? Well they do in this world, and they are not about a new leader who plans on closing the sweatshops that keep their costs low and profits high.

She finds him vapid, and that gets under his skin for some reason.

Imagine 2008 Matthew McConaughey to the 10th power and that's Hansel, an earthy muticulturalist who knocks Derek off his pedestal.

4. Derek's Roommates Try To Cheer Him Up, But Are Killed In A Freak Gasoline Fight Accident

The loss sends Derek into a funk; he knows how fickle the industry can be. But it's nothing that a little Orange Mocha Frappucino and a lot of George Michael can't fix. Unfortunately, his dumb but sweet friends perish while frolicking where they shouldn't be frolicking.

5. In Mourning, Derek Vows To Find Out If There's More To Life Than Being Really, Really Ridiculously Good-Looking

Eccentric designer Mugatu wants Derek for the coveted lead in his Derelict campaign, but the model wants to return to his roots. He visits his dad and brothers and even works in the mine with them, but an ill-timed airing of one of his commercials during a post-work beer reminds him that he'll never fit in with those guys. ("Merman! *cough cough* Merman!")

7. His Agent Maury Convinces Him To Do The Job; Preparations Involve Being Brainwashed Into Becoming A Killing Machine

Little does Derek know that he's been handpicked by Mugatu to be molded into an assassin who will kill the Prime Minister. His longtime agent Maury (Jerry Stiller) is in it for the money, and helps Mugatu sign him. Part of the pitch is that the cash will help Derek to give back, but he doesn't respond to the model of the "Derek Zoolander Center For Kids Who Can't Read Good & Want To Learn To Do Other Stuff Good Too" like they expected. ("What is this? A center for ants?")

8. Derek Challenges Hansel To A Walk-Off

It's like high noon at the OK Corral, except David Bowie is there. Hansel wins by somehow removing his underwear without his hands and while still wearing pants.

Prewett seems like a conspiracy nut, but his claims back up the information that Matilda has begun to dig up. He warns Derek that he's in danger; all the assassins are killed after their missions are complete.

10. They Hide Out At Hansel's, Enemies Become Friends

11. Matilda Figures Out That Maury Is In On The Plan & Sends Hansel & Derek To Retrieve Incriminating Files From His Computer

The plan is not a success.

12. The Derelicte Fashion Show Starts, With The Prime Minister Sitting In The Front Row

Derek doesn't remember his brainwashing, so he can't know what will set him off.

13. The Song "Relax" Triggers Derek's Killer Instincts, But Hansel Pulls The Plug Before He Can Assassinate The Leader

Derek is about to snap the Prime Minister's neck when he finally snaps out of his trance for good.

14. Mugatu Tries To Kill The Prime Minister Himself, But Derek Stops Him With "Magnum"

"Magnum," the new look that Derek had been preparing to top his other creations like "Blue Steel" and "Le Tigre" literally stops Mugatu's throwing star in the air. Derek is more excited that he was able to turn left on the runway. His only flaw as a model had been his inability to "hang a louie."

Hansel destroyed the files when he trashed Maury's iMac, but the agent calls his lovely wife Sheila and asks her to bring the zip disk from their home in Long Island. ("For Christ's sake, it's a casserole, Sheila! It'll stay!") Even Mugatu has to admit that "Magnum" is something else.

15. A Few Years Later, Matilda & Derek Have A Son & Run The Derek Zoolander Center For Kids Who Can't Read Good & Want To Learn To Do Other Stuff Good Too

The movie ends with an optimistic flash forward. The Derek Zoolander Center is a real school, offering classes in business and base-jumping, taught by Maury and Hansel, respectively. Matilda brings Derek Jr. to visit so that he can show his dad "his first look." Derek's roommates are immortalized in a bronze fountain sculpture.

And that's what you missed on Zoolander! I can't tell you where these characters will go in Zoolander 2, but I can promise inside jokes, celebrity cameos, and lots of bizarre, "high-fashion" outfits.

More like this
Everything You Need To Remember Before Westworld Season 4
By Brad Witter
What Does The Presley Family Think Of 'Elvis'?
By Arya Roshanian
Chris Hemsworth Joked That Baring His Butt In ‘Thor: Love And Thunder’ Was A “Dream”
By Brad Witter
Photos Of The 'Elvis' Cast vs. Their IRL Counterparts Will Have You All Shook Up
By Grace Wehniainen
Get Even More From Bustle — Sign Up For The Newsletter